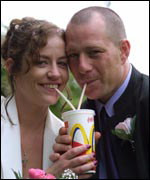 It is traditional to do the 'lift up the bride and groom in chairs' at a Jewish wedding. You would think it might be better to get chairs with arms, but my family didn't. At my cousins wedding the bride slipped right off and sprained her ankle. They have a good sense of humor and after they bandaged and iced it up they were laughing.

I was a groomsman again 4 weeks ago.

During the vows I passed out and vomited next to the cake. I hadn't been drinking, but hadn't ate most of the day and locked my knees. I was out cold for about 5 minutes, and someone called 911 so the paramedics, fire department, and police showed up. I had to sign a waiver to avoid going to the hospital.

Yeah. That was fun.

My aunt got married at my grandmother's ranch. I didn't actually make this one, but hear it was a good ceremony and most everything went well. For this part of the story it's important to know that my aunt was pregnant at the time. They were getting married anyway and it wasn't a big deal, but as a joke, and without my aunt knowing in advance, my grandmother grabbed her shotgun before she walked down the aisle, and we had ourselves a genu-ine shotgun wedding.

The family has a pretty good sense of humor, so this wasn't the 'terrible wedding moment'. That happened later that night as the reception was winding down. The wedding happened under this canopy/tent type of thing. Basically a canvas roof held up at the corners by metal poles and everything has to be staked into the ground. The grooms brother (and some other drunk guys in their 20s) were playing kick the can as some sort of drunken ironic "we're on a ranch" joke. He fell on one of the stakes for the canopy and it broke his rib and DROVE IT INTO HIS LUNG. I don't know if they waited for an ambulance (or helicopter for that matter) to get out to the ranch or if they had to drive him to the hospital themselves. So my aunt and the groom spent their wedding night in the hospital worried about the grooms brother.

She's a Mormon, he's a hard-drinking, cursing cowboy. A match made in heaven, except that the parents hate each other.

Drinking? Mormon mom was having none of it. The result? A family of rednecks getting drunk off cheap whiskey outside the church, offending every member of the bride's family that walked past.

My sister was married about ten years ago and the wedding itself was great. The minister, limo driver, and a couple others were competent friends of the family, which helps a lot. The terrible moment of this wedding came the next morning.

The ceremony was recorded on VHS and the only copy went home with the groom's mother that night. She watched it before going to bed and left it in the VCR. The next morning the VCR did just as the father of the groom had programmed it to do and recorded a NASCAR race. A very nice ceremony beginning what still is a great marriage, completely recorded over forever by fucking NASCAR.