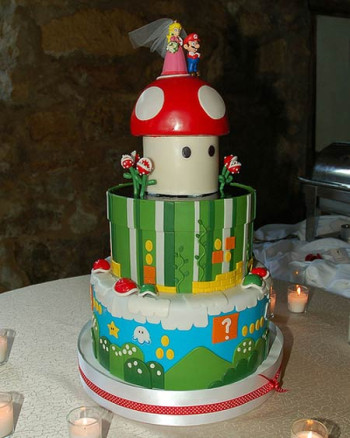 My mother re-married when I was around four years old, in a small ceremony in her tiny home town. While I vaguely recall the ceremony (and having to wear a stupid suit, ugh!) I'm told the priest had to stop his speech several times because he was laughing at my attempts at finding gold, hidden deep in my nasal cavities.

My dad's side of the family is entirely Hispanic, and the ex-wife of one of my uncles is absolutely batshit crazy. She's an untreated schizophrenic with obsessive-compulsive disorder, and her daughter (my cousin) got pregnant/married at 19. So they manage to swindle this little church into giving them a ceremony in the church's nearby double-wide trailer. So I'm there with all my aunts and uncles; I go sit by my godfather who is a sarcastic, hilarious old Hispanic guy and we chat it up until the bride starts walking (read: waddling) down the aisle.

Now, what my crazy bitch ex-aunt-in-law forgot to tell us was that this church was one of those "YES YES JESUS LAWD" screaming churches. The parishioners scream and chant and wave their hands and holler along with the ceremony. They start it up -- lifting their hands and crying "YES YES, YES JESUS, JESUS SAVES, YES LORD" as she starts walking down the two-foot aisle of the trailer to a synthesized version of the Wedding March. Her husband-to-be isn't even there yet, her mom is following DIRECTLY BEHIND HER waving her arms and going "Jesus, Jesus, Jesus, Jesus" while the non-family parishioners are keeping it up. "YES YES YES LORD." My godfather can't hold his laughter anymore, so he busts up his hands and goes, "YES, YES, HELL YES, JESUS!"

My godmother almost killed him, but I nearly pissed my pants laughing. Now every time I see him, all he has to do is say "YES!!" and we both start crackin'.

My brother-in-law got married to a fine young lady who put on the invitations, "We don't want gifts, just transfer money into the bank account below".

What a fucking bitch. Everyone brought presents instead.

She also said it was 'black tie' on the invitations but when I confirmed with them a few weeks prior to the wedding that they'd expect me to be in my tuxedo, she said 'No, everyone just dress nice, no jeans'

Amusingly a handful of people did turn up in black tie.

Oh god, I keep remembering random shit from the few weddings I've been to. One was held in a tiny, rural church and they decided the best sort of music to walk up the aisle would be a bagpipe AND an organ. They were both playing as loudly as they could (and hell, bagpipes are just loud period) but the problem was one or both of them were just slightly off key in two different ways. It was one of the most raucous wedding marches I had experienced.

I worked as a banquet server for about a year and served quite a few receptions.

One story that sticks out in my mind is a reception with an open bar. One of the older gentlemen from the party decided to get drunk. Drunk to the point he shit himself. And left chunks all over the hotel floor.

On top of that, it happened early in the reception, which meant most people were still there to witness this spectacle. The bride was definitely not impressed with this man, who turned out to be her father.

Well aisle be damned, these were some great stories, finished off in our usual winning style of pants-shitting! Thanks as always to the forum goons for contributing. I'd wish them all the luck in the world for their own weddings, but we all know that's a dead end street as everyone who has ever used the internet for purposes other than school or work is guaranteed to wind up dying alone. If I was a little girl ghost that lived in a TV from a poor remake of an already crap Japanese horror movie I would be whispering "7 days" at you right now to remind you that next Tuesday will see yet another Comedy Goldmine unleashed on the world. But I'm not. So I won't.