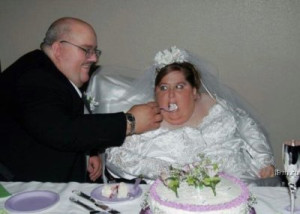 My best friend's wedding in high school was frightening... They had it in a teeny tiny "church" in a strip mall and invited half the town. She was 6 months pregnant, he was stoned off his ass, and there were 50 or 60 town yokels shoved in a room the size of a janitors closet. After a very tacky and sweaty ceremony, we went back to a friends house. This was in the early 90's. EVERYTHING WAS BLACK.. The cake was black, the decorations were black, everything. After being wedged in a corner between two 400lb cousins and watching the bride and groom's first dance (tongues down each others' throats and her hand in his pants) I went to get the hell out of there. Passed their car which had been decorated in condoms and whipped cream. I think condoms were a bit of a alien thing to them since she was 6 months pregnant at the time and had 2 more kids in 2 years...

At my best friend's wedding, the reception was at this house with a pool and for some reason they decided they'd place everything such as the tables, the serving stations, all around the pool. To make matters worse they had slate tile bordering pool.

So while the food was being served and everyone was gingerly navigating around the slick slate to get to the tables of course the groom's grandfather, a 93 year old man, falls into the pool. Everyone just gasps in shock.

He bobs once, twice, three times with this look on his face like he is having a stroke. So I put down my plate of food in the buffet and wade into the pool to help him out.

Never have your wedding directly near or on a body of water. People will fall in, it's a scientific fact.

I was a bridesmaid in my good friend's wedding in May. The ceremony was beautiful, but while we were waiting in the foyer before entering into the reception hall, a friend of hers walked by with a glass of red wine and accidentally spilled it all down the bride's gown. The worst part was that her dress had pickups so the wine pooled in the draped material.

I didn't see it happen, although I wish I had - I just saw her eyes bug out and then a few girls usher her into another room while a staff member ran to get club soda. Luckily, it all ended well because my friend is very calm and cool and her mother and maid of honor were able to clean the spot out of her dress, but it was one of those moments you only hear about in magazines or on TV shows. We all just kept thinking, did that SERIOUSLY just happen?

There were a few other hitches - the DJ brought a case of CDs instead of a laptop, and the music quality was terrible. The CDs would skip and he would have to shuffle through his case to get to the next song. Also, another friend of ours accidentally ripped the brides veil out of her hair (and we were unable to get it to stay put when we tried to put it back in). But, all in all it was a great wedding, and do those little flubs really matter in the long run? Nahh.

I once went to a new age wedding for a belly dancing instructor/massage therapist. Needless to say as a belly dancer she was super fat. They had lots of little Hummel-like figurines of dragons and dolphins and shit on their "wedding altar". The minister was some super gay dude in a sparkly turban and cape. The procession moved along to a Loreena McKennitt song. It was all so glorious.

I attended a friend's wedding years ago, where the guy officiating was a friend of the couple and a fairly new pastor. During the ceremony, he was giving some Biblical sermon. Okay, fine, but then somehow it turned into talking about a woman's period and its significance in the Bible. I don't even remember exactly what he said, but it went on and on and guests were kinda looking at each other like "What the hell?" During the reception, a number of people said to the bride things like, "Wow that was sure an, um, interesting ceremony!" She was really embarrassed, they had no idea he was going to say anything like that. Lesson is, if you're getting married, check out what the pastor is going to say beforehand!