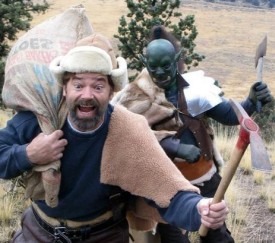 Q: What department of the MMO do you work in? (like art/programming/level)

A: My job title is Lead Systems Designer. I am working on the "game rules" of a new MMO. Basically, I'm writing the rulebook, determining what players can do, how they develop their characters, how interactions will happen between them, etc. (I can't go into too much detail since our game is still top secret at the moment. The MMO industry is fiercely, fiercely competitive.)

Q: What's the day to day of it like during Development (pre launch)?

A: Lots of meetings. We're a small team right now. It's mostly glorified bull sessions. How will this work, what should we do to fix X, how fun do you think Y will be, etc. Once a week we just get together to play games and eat pizza. I brought Junta (the boardgame) this week.

This is what's called "pre-production", where we get all the structures and systems in place to get ready for cranking on all cylinders and hiring a full team. "Production" is when the game is actually built, and it's a bit busier.

Q: What's the day to day of it like during Live-Game?

A: Pretty much all reaction, all the time. Putting out fires. It's a lot more stressful. I prefer working on live teams, I like stress!

Q: Do a lot of people get laid off post game-launch?

A: Not usually, which is different from the rest of the game industry. Usually what happens is you have a small live team, and the production team starts working on expansion packs.

Q: How big is the team you work with, and what's the general consensus on how successful the mystery game you're creating is going to be? I know that's a tough question, but what's the feeling?

As to team mood: We're pumped! This is the most "fun" phase of the process and we all believe we have a fun game that'll do well and help move the state of the art forward.

Q: How often do larger companies actually listen and take suggestions from the players, and incorporate changes based on what players have suggested?

A: Depends on if they want to be successful or not. Players know more about a given MMO then their developers do. This isn't a joke or hyperbole, it's simple fact. Players spend a lot more time, both in man-hours and sometimes individually, then the people working on the code. So, they might have some insight into things.

Of course, they can also be wrong. In a class based game they might want their own class to be more powerful than anyone else. In a factional PvP game they want their own faction to win and resent when work is done on anyone else's. It's the job of the developers to filter that and figure out what's good feedback and what's grumbling.

There's a discipline (community relations) that deals with nothing but collecting, processing and delivering player feedback, and communicating the results back to the players. EVERY MMO company has a community relations team.

Q: I suppose my question would be how do you feel about NCSoft management? Do they run a tight ship? What about the previous job then? How was Mythic, corporate environment-wise?

A: I will say I'm really happy at NCsoft. They're giving me plenty of room to run amuck.

Mythic was bought by EA last year (after I left) so anything I remember probably isn't applicable anyway. There's some SA forum goons still at EA Mythic, but much like myself, it's not like you're going to get them to talk badly (or well) about their boss on the Intarweb.

Q: Being on the other side of the fence - how do you feel about the difference between player perception and reality? Players often have a lot of unreasonable expectations and requests, and a lot of the responses are usually "It's not in the tech" or "It's not a priority at this time". Being on the other side, how does that feel? Are players really just that clueless? Do you ever sympathize with them and know it would be a great thing to add, but the "higher ups" don't see eye to eye?

A: Players are clueless sometimes. My favorite example of cluelessness is when players insist we are making some change in the game just because "OMG the developers play in Midgard" or "OMG the developers all play Rogues". That's just ...silly. Yeah, it's a game, yeah, presumably the devs (or at least some of them) are "eating their own dog food" and playing the game they made, but screwing with their business' long term health to make their e-peen three inches bigger? That's just... mindblowing. But MMO message board posters tend to have... um... a lack of perspective sometimes.

And of course the reverse is always true as well. Like I said, the players know a lot more about the game than the developers do. And sometimes there's someone in charge who disagrees and thinks they know more than the players. That is why stupid mistakes happen. Note: the Vision(tm) is only good in moderation.