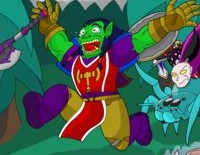 Q: Do you think Warhammer Online will take down WoW as the leading MMO?

A: Ordinarily I don't comment on other folks' games. I think Warhammer will be huge in Europe, and pretty big in the US, but I doubt anything will kill WoW short of Blizzard just not wanting to make it any more or something.
The MMO market isn't a zero sum game. People will go try Warhammer (or LOTRO or whatever), some will stay, some will go somewhere else. Depends on where their friends are and where they put down roots. It's really, really hard to kill an MMO. UO's still going strong after 10 years.

Q: What, if any, ideas for countering eBay sales of in-game items and accounts have you or others you've worked with had but were never implemented?

A: When I feel particularly swinish I think about things like banning the IP addresses for, oh, Asia. Stuff like that. Unfortunately that wouldn't even stop it (lots of farmers in Eastern Europe and right here in the good ol' USA).

Other then that, nothing I can really talk about. Lots of metrics to see where the problems actually are, plus it'll help point out bugs since farmers are usually the worst bug exploiters.

Q: How do companies go about raising capitol for MMOs? How much of it comes from private investors versus publicly held companies?

Q: Who is the gamer you target with the kind of work you do? Someone who has never played MMOs? Trying to get people to switch over from another one? How long do you (as a designer) expect them to subscribe?

A: I generally target me, since I have a pretty good idea of the kind of games I like. I occasionally try to branch out into making games for other people, but honestly either you're writing for yourself, or you grow to hate what you're doing.

Q: What is your favorite element of a game? Least?

A: I enjoy well-crafted storylines and good PvP. I'm REALLY tired of grinding, thanks.

Q: How do you feel about ease of system requirements versus high end graphics?

A: High end graphics are great for things like shooters. When it comes to MMOs you have to have liberal ease of use requirements because the more people you can cram on screen the better in general the experience can get. Even if you have the best rig you can buy, if you go on a raid and there's 500 people there your rig will melt.

Q: Do you feel the lessons about polish were actually learned though? So far all the MMORPGs I have tried, WoW is the only one where the content is actually mostly bug free and extremely polished.

A: Well, to be honest not many games have come out SINCE WoW, and LOTRO (the big release lately) has picked up some kudos for being almost as polished as WoW. Still, there's a reason Blizzard's Blizzard. Not everyone has the money or talent.

No more questions! You're probably glad, I guess it's been as long as 6 or 7 minutes since you last loaded up your favorite MMO. A huge thanks again to Lum_ for answering the questions put forward to him, and my appreciation also extends towards the forum goons who provided the talking points. Next week's Comedy Goldmine will examine the pros and cons of trading your mom's car from some bitchin' anime. Join me then!