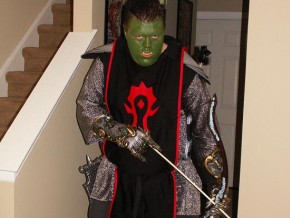 Q: Do you have to run post-launch design changes/patches with higher-ups outside the immediate live team, that is, are there people who have to approve all moves?

A: Yeah, there's usually a Producer or someone with a similar title providing buck-stops-here adult supervision. Past that decisions are usually made in meetings by committee and consensus.

Q: Does the corporate side ever try and add their own suggestions for better sales and whatnot?

Q: Have you ever had any significant security problems or horrific bugs that arose as a result of your coding?

A: Yep. Everyone has horror stories. The worst of mine was what I alluded to earlier. Basically, I was first hired to write DAOC's CS database and frontend tools. They worked fine when only 2 servers were up, but once all the game servers went up on launch day, they promptly started to elbow aside the login server, and eventually brought down all the game servers as well.

Yeah, that was fun.

Q: As a game developer with an inside track to how the market leans do you feel MMORPG's in general are forever going to be moving away from the Raph Koster "sandbox" simulations where you can do and be anything towards the fixed level grinds like WoW because of the "9 million players" mentality? Or, rather that the next generation of MMORPGs is just naturally going to progress into something totally unlike the UO and WoW designs?

A: I think it's actually going to go both ways. Meaning that some will try to clone World of Warcraft to get some of those 9 million subs (5 million of which are in China and are paying pennies on the dollar, BTW). Others will try to differentiate themselves from the market leaders, and sandbox-style games are a good way to do that. Eve is a great example; it's a sandbox-style game that has really found its niche and is wildly successful considering its investment and initial performance at launch.

Of course, right now all the stupid money in the industry is going after cloning Second Life, because that's what's in the news.

Q: I'm not sure if you'll be able to answer this since you're no longer at Mythic and only joined them during DAoC but do you think there will ever be a multiplayer magic fps game like Magestorm? I really enjoyed all of Mythic's old games like Magestorm, Spellbinder, and Splatterball. Sadly I have a hunch that now that they were acquired by EA, Mythic will be only producing MMORPG games and nothing else.

A: I'm pretty sure EA bought Mythic so they could work on MMOs. That being said all the people who did Magestorm and Spellbinder are still there (except for Matt Firor) so who knows.

Q: What's the pay like? Most of the people I know are at EA or EA subsidiaries, and I haven't discussed it with the few I know who aren't connected to EA.

A: Usually a bit lower than in the "civilian" world. Sometimes a bit higher, if you're currently in demand. Bonuses for having a successful title can jack your salary up quite a bit. I didn't do that badly at Mythic and a good 1/3 of my salary was made up of bonuses for helping ship DAOC.

Q: As a college non-grad and continent-bummer-arounder, how did you manage to land what seems like such an awesome, creative job? Did you apply for it, work your way up to it, have it offered to you out of the blue?

A: My last job I got from (a) having experience coding database applications and (b) whining on my blog that I just got laid off. Whining can work!

My current job I got from proving myself in the last job, developing contacts, and finally sitting down in a day long interview describing the game I'd make if given the chance. They liked it and hired me to help make it.

Again, not the job trajectory I'd recommend. Gamasutra is the main point of contact for game jobs.