The middle ground is the safest place to be sometimes, which is probably why these films score between 20 and 40, excepting one egregious failure. The best choice this week is to see Killer Joe as it finally turns up stateside.

EXPECTATIONS: I like my car. They like their bicycles. They say I should ride a bicycle too. They swerve into my lane. I fantasize about hitting them. Alas, I don't fancy a vehicular manslaughter charge. I slow down to match their speed. I go 10 in a 25 until they're tired of annoying me. This is the daily routine of a car driver in a city of cyclists. It's frustrating, damn it, so when I see the trailer for Premium Rush, in which cyclist Joseph Gordon-Levitt gets tossed from a cab into an apparent concussion, I feel a little funny in my pantsies. 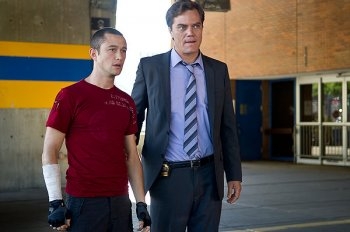 They both co-starred with Leonardo DiCaprio in much better films. Coincidence? Probably!REALITY: Premium Rush confirms two of my long-held suspicions: Cyclists love making the daily commute a living hell for drivers, and Hollywood made a smart decision when it stopped grafting extreme sports onto action-movie plots about a decade ago. Premium Rush may be quick, painless and fitfully entertaining, but pitting a motley crew of bicycle messengers against a ticking clock and a dirty cop with a gun is a surefire recipe for badness.

Consider the premise, which redefines ludicrous in its high-concept simplicity: Messenger Wilee (Gordon-Levitt) has 90 minutes to deliver an envelope, containing only a movie stub, to Chinatown, aided only by fellow messenger and romantic interest Vanessa (Dania Ramirez). Their obstacles? Rush-hour traffic, corrupt cop Bobby Monday (Michael Shannon), and a third bike messenger (Wolé Parks) who's out to steal both the package and Vanessa's heart.

Before you can say "yo that's my girl dawg," the movie's over. At least director David Koepp (who, as co-writer, is facing a plagiarism lawsuit) has the good sense to not let Premium Rush overstay its welcome, I guess. It's 90 minutes of harmless, pseudo-anarchistic punk filmmaking in the vein of Paperboy - come on, you remember that old game built around comic mischief - and it amounts to a breezy, utterly PG-13 riff on Crank. (Wilee may not be wearing a helmet in the poster, but I assure you, he wears a helmet whenever he's riding his bike during the movie. The studio might be concerned about a wave of kids imitating the stunts in Premium Rush without the added safety of helmets, but let's be honest: Fail these stunts and you're guaranteed to be dead, helmet be damned, especially since Wilee spends most of the movie encouraging fellow bike messengers to remove the brakes from their bikes.) 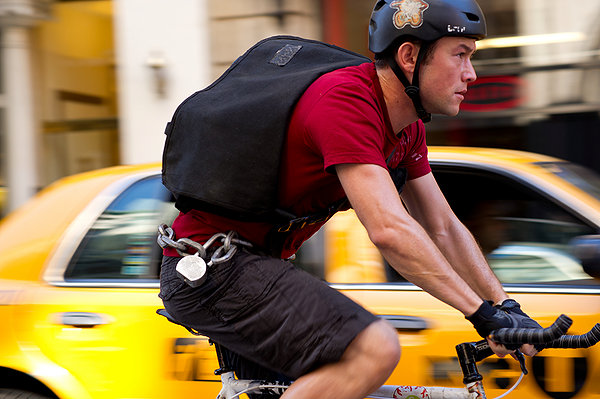 The biggest upside to this late-summer cheapie is Shannon's bombastic one-note villain. I guess essaying characters of true complexity wears on an actor, and sometimes ya just gotta chew some scenery. Shannon clearly has a blast realizing the absurdity of a cop like Monday, the action-comedy complement of Harvey Keitel's bad lieutenant minus, of course, the drugs and sex. What's left? A flagrant gambling addict and PG-13 racist who, like me, is itching to kill a cyclist if it can make his day any easier.

Hell, if not for the racism, Monday would easily be the most sympathetic character, because the cyclists, characteristic of most cyclists, are a bunch of fucking assholes. Even before they're outrunning a dirty cop, Wilee and Vanessa cause at least two accidents, one of which looks quite painful, and laugh about it. The mischief may be comic, but Wilee and Vanessa are perfectly willing to ignore the consequences of aggressive riding: totaled cars, assorted property damage, etc. As Wilee says with a smirk, they're "runnin' reds and killin' peds." 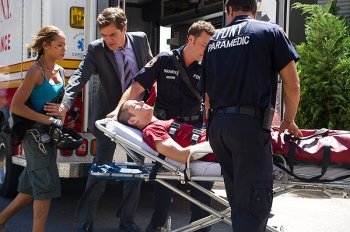 Oh good, it has a happy ending.That Premium Rush co-opts a vaguely punk anti-establishment ethos to embody the very definition of a Hollywood action-comedy is perhaps its most disturbing quality. Take, for instance, a recurring bicycle cop who has every reason to detain Wilee after he causes a fender-bender. We're expected to laugh at his mounting misfortune, the Wile E. to Wilee's Roadrunner, as he accrues cuts and bruises before Wilee takes it to the next level and actually steals his bike. Problem is, he seems to be a good cop and a nice guy who's more than a little tired of chasing a cheeky shitbag across New York. By mainstreaming anarchy, Koepp does the most callous thing imaginable: He aims to make a quick buck from young liberals who go to see their hazy, unfocused political rage crystallized in a ridiculous blockbuster about bike messengers. In that regard, Premium Rush is the Green Day of punk filmmaking: coherent, polished, palatable. It might even piss off your parents if you blare it loudly.

Considering the economy of characters in Premium Rush and the kind of repercussions car accidents would have on such a limited dramatis personæ, Koepp and co-writer John Kamps maximize their screenplay with a rather brilliant gimmick: On at least three occasions, time slows down for Wilee as he's forced to evaluate different paths fraught with danger. Every time this happens, we see two paths that end in tragedy before a third path proves to be the right one, which means Wilee only crashes once or twice in the reality of the film, but in his choose-your-own adventure fantasies, we see him eat shit like four more times. This is a glorious return on a $4 ticket for an anti-cycling sadist like me.

MINORITY REPORT: Oh God, I couldn't agree more about bloody cyclists. "Oh, I'm just going to pull out and pass these parked cars even though there's faster traffic behind me. My head does not turn, for I am a cyclist. If I ignore what's behind me, it isn't there." Fuck cyclists. - Ian "Professor Clumsy" Maddison 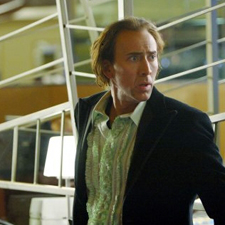 That "brilliant gimmick" where they film all the paths a situation could take sounds awfully familiar, almost as though I've seen it before it happened. Hey, can I get in on that plagiarism suit? - Nicolas Cage, star, Next (2007)