It's a good week for Charlize Theron, who appears in both Prometheus and Snow White and the Huntsman. Also, we have two wonderful films (Moonrise Kingdom, Monsieur Lazhar) and the not-so-wonderful Crooked Arrows.

EXPECTATIONS: Ridley Scott is returning to the Alien franchise? He's doing a prequel that deals with the Space Jockeys!? He's exploring the creation of mankind in his sci-fi horror extravaganza?!? Michael Fassbender is in it!?!? Where do I sign up?

REALITY: Prometheus is certainly not as good as Alien -- far from it, in fact -- but I don't think anyone ever really expected it to be. That said, Prometheus is certainly surprising, which is probably its greatest strength. Rather than merely rehashing the themes of the earlier film, Prometheus takes the central ideas and brings them somehow closer to home. Instead of a preoccupation with rape and perverted sexual activity, Prometheus presents a fear of normal sexual activity and reproduction. 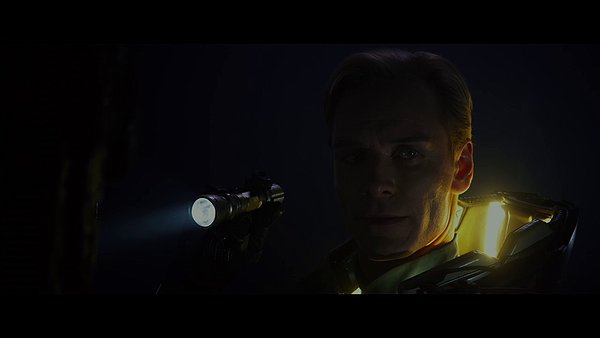 Wait 'til you see him with the lights on!

After a series of discoveries of ancient paintings representing a giant man pointing to the stars, doctors Elizabeth Shaw (Noomi Rapace) and Charlie Holloway (Logan Marshall-Green) are shipped off to deep space aboard the titular space vessel Prometheus. This expedition, led by company bod Meredith Vickers (Charlize Theron) and Captain Janek (Idris Elba), finds that the creators they went looking for might not want to be found. Also, they soon discover that their custodial android David (Michael Fassbender) has a dark secret of his own.

The plot is full of twists and turns, but it never slows down enough to make sense of what is going on. That's just as well, considering the nature of what really is going on. There's some interplay between a pair of colourful scientist characters (Rafe Spall and Sean Harris) that is abruptly cut short, a relationship between David and Vickers that hints at some deeper rivalry, and a little bit of corporate greed waylaid by military honour. It all comes together in the end, but in a plot sense it never becomes quite clear why. Very few of the characters get a chance to breathe, and there are a few too many of them. Some even seem to vanish from the film only to reappear later, instead of sticking around to be part of an ensemble. 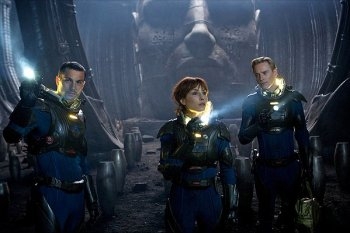 Looking good in blue.The thing is, very little of that matters in the grand scheme of the movie. Yes, the plot makes little sense, but this film is also filled with deliberate inconsistencies. The monstrous entity of the film is a kind of bizarre viral infection that has all kinds of crazy effects on its sufferers. The inconsistency of the thing is one of my favourite elements of the entire film.

The cast is uniformly excellent, with Michael Fassbender as the real standout. The man can do no wrong, so it's no surprise that he steals all his scenes in this film. We are introduced to him pottering about on the Prometheus, a callback to some classic sci-fi movies like 2001: A Space Odyssey and Silent Running. In these early scenes, he is 2001's Dave and Hal rolled into one, and it's a joy to watch him working on his Peter O'Toole impression as he goes about his daily chores.

This character is the real heart of the film, turning from a figure of terror to a man we want to see succeed. He draws fear from us with the simplicity of an extended index finger in one scene and then makes us see his frailty and weakness in another. And it is a strange frailty too, both human and longing for humanity at the same time.

The other standout performance here belongs to Noomi Rapace. Her accent occasionally slips, but for a non-native English speaker to have done such solid work playing an English character is genuinely impressive. She's also a very likeable protagonist, by far the warmest presence in the entire film and a good foil for the coldness of Fassbender's David.

I can see how Prometheus might leave some people disappointed, especially if they're expecting Alien all over again.To be honest, it disappointed me a bit too, but having had some time to think about it I can definitely say that it's much stronger and more effective than most are claiming, and that it definitely offers an interesting progression on the themes of Alien.

MINORITY REPORT: Toward the end of Prometheus, when Michael Fassbender's giant fassbender is revealed to be the Space Jockey from Alien, I smirked with recognition: The twenty-odd feet of kielbasa that so terrified Shame viewers once again makes Prometheus a worthy horror film, and a worthy prequel to a franchise built around vaginal horror and the monstrous feminine. Chalk this up as an instant classic. - Sean "Keanu Grieves" Hanson