Up There With the Best of Them.

In June 2008, if you had told me that Pixar would top the emotional and technical masterpiece of Wall-E in less than a year, I would have told you to get the hell out.

May 2009 comes and, look at that, I find a movie that was far more beautiful and unique than even Wall-E in Pixar's Up.

Only Pixar could turn a story about an old man tying Balloons to his house into an absolutely touching experience. In the first ten minutes of the film we meet Carl at a young age, as he meets Ellie, a strange girl who has taken up residence in an old broken down home and turned it into her clubhouse. They become fast friends, and soon we skip ahead to see them live their lives together, through happiness and heartbreak&and I do mean Heartbreak.

In this short montage, Pixar makes you care for these two characters more than most movies manage to do in their entire running time, and when it's over, you are perfectly set up to join Carl on his journey.

Throughout his adventure, Carl meets several people, and each person teaches him valuable lessons, mostly about moving on with one's life after losing a loved one. The most substantial is Russell, a Wilderness Guide looking to gain his last badge, but really is looking for a father figure, and slowly becomes the grandchild Carl didn't know he needed.

He also meets Kevin a huge bird, and Dug, a talking dog, who happens to belong to Carl's childhood hero, Charles Muntz. Meeting Muntz is a big part of the story, as it presents a mirror for Carl to look in to see what might have happened had he let his loss and despair eat away at him. Muntz is obsessed with finding the bird, because it will prove him right, and after years and years of failure, he is willing to do anything to get it. Carl had his own obsession, his devotion to not only Ellie, but her earthly possessions, and his encounter with Muntz makes him realize that this is a road he doesn't wish to go down, and one Ellie didn't wish for him either. 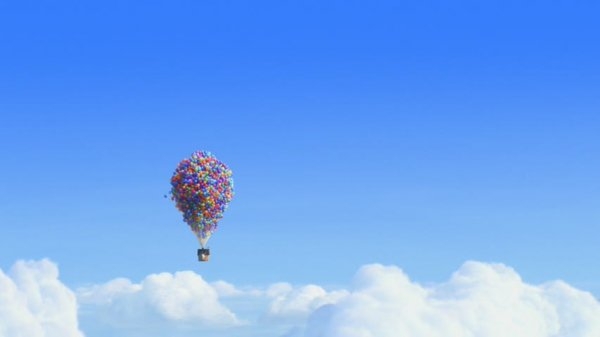 The surprise birthday party didn't end well after somebody got a little over-zealous with the balloons.

It's all credit to Pixar for taking their lead character and making him an elderly man. Most studios would never try that, due to the un-coventional nature, and for fear of it not going over well&and for Pixar, it paid off in spades. Carl is their most complex and interesting character in years, and his nemisis is just as interesting. Muntz is a daringly dark villain for Pixar, who usually like to keep their villains more light hearted. Like Syndrome, Pixar's darkest villain to be sure, Muntz is downright Nasty once his villainy is revealed, and his death is surprisingly grim for Pixar (as it was for Syndrome) and they deserve credit for taking a summer tentpole film to places most wouldn't dare.

Up is at once a funny, heartbreaking, and uplifting (no pun intended) film, that manages to hit so many notes over it's running time, it's staggering. Pixar really are the kings of storytelling in animation these days, and Up proves once again, that they are still on top of their game.

It's also a visual masterpiece, bathed in beautiful colors that not only allow the film to work emotionally, but it's great eye-candy. In fact, in terms of visuals, I think this film, is second only to Avatar.

When I walked out of this film, I knew it would be a strong contender for my top ten of the year, but I never knew it would stay so high. I could talk about this film for hours and hours and it will be a favorite of mine to revisit for years to come, I feel. Well Done Pixar. Well Done.