EXPECTATIONS: This film practically has Vargo's name written all over it, a fact he has announced at every staff meeting for the last three weeks because apparently none of us can read. All V's aside, the last time Ben Affleck sat in the director's chair, he turned in the tight, no-nonsense crime drama The Town. Argo promises more of the same, and I'm looking forward to seeing how he handles throwing international politics and a period setting into the mix.

REALITY: Boy, Ben Affleck sure has come a long way from the dregs of Daredevil and Gigli. Argo is a deadly serious political thriller with an almost Hitchcockian ability to generate tension and a script that features zingers ripped straight out of the Aaron Sorkin playbook. It's also the year's first serious Oscar contender, and I'd wager it's now a frontrunner, because there's nothing Hollywood loves more than a movie about Hollywood saving the world. 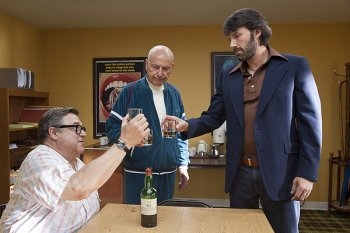 Here's to brilliant character actors. And Ben Affleck.During the 1979-1981 Iranian hostage crisis, six American embassy workers seek refuge in the home of the Canadian ambassador. Enter Tony Mendez (Ben Affleck), a CIA 'exfiltration' expert who has a hare-brained scheme for bringing these people home. His plan: Hire a Hollywood producer (Alan Arkin) and make-up artist (John Goodman) to back the production of a bogus film titled 'Argo', a sci-fi epic that looks like one of Star Wars' Flash Gordon-shaped poops. Tony goes to Tehran claiming to be a location scout for a Canadian production company; he plans to sneak the Americans out disguised as his film crew.

With a plot this patently ridiculous, it's important to remember that these things actually happened, and the film reminds us of this in its bookend segments. The film opens with a brief crash course in US-Iranian relations, establishing the reasons behind the Islamic Revolution and the notion that America might not have been completely innocent in the matter. Argo doesn't pursue this too far, though, as the real story here is how Mendez managed to bring together so many disparate resources in pulling off such an oddball rescue mission. This is a real-life Mission: Impossible in which nobody runs from explosions or rips off latex disguises, and it's every bit as engaging.

Affleck seems to love upping the stakes in his films while keeping his stories small and intimate. In The Town, the somewhat grandiose tale of bank robbers in Boston was pared down to the story of a bank robber and his relationship with the woman he kidnapped. Here, we have two countries in a political standoff, a film industry in the midst of upheaval, and a CIA running out of options, but the story that keeps us hooked is Tony and his team's dedication to saving the lives of six people. One has to wonder how Ben Affleck plans to top the stakes he's established in this film. If sooner or later he decided to make a blockbuster epic like the made-up Argo, I would not be at all surprised. 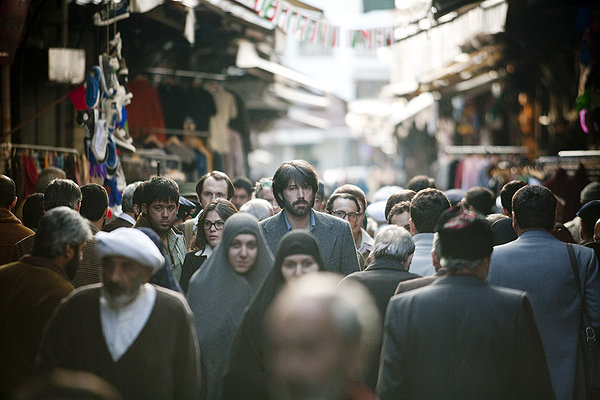 Come on, Affleck. There's no way you're that tall.

Argo is deeply rooted in the late-'70s/early-'80s aesthetic, from the constant use of contemporary news footage, hair and clothing styles to the way Affleck shot everything on film and edited it by hand. But the film leans heavily on a number of cultural touchstones from the '70s as well, namely Star Wars and Battle for the Planet of the Apes. These constant little nods point to the road that would eventually revitalize Hollywood and all but wipe out the sort of mature political thrillers that Argo most closely resembles. Star Wars in particular has a strong presence in the film, and for better or worse it even winds up influencing Ben Affleck/Tony Mendez' plans.

There is one scene in which a Star Wars reference comes across as condescending and more than a little culturally insensitive. As Mendez leads the American refugees out into public, they find themselves detained and questioned by the Revolutionary Guard. The one American who actually speaks Farsi explains that they're a film crew looking for locations to shoot their sci-fi movie, and starts telling the plot of their movie with storyboards, wild hand gestures and "CRASH-BOOM!" sound effects. Call me crazy, but this scene is practically identical to the scene in Return of the Jedi where C-3PO explains the plot of Star Wars to the Ewoks. Perhaps the idea is simply to show that if the Americans believe their story, then so will the Iranians; it just strikes me as the last scene you'd want to crib from Star Wars if you wanted to show two different cultures understanding one another.

For the most part, though, Argo minds its history and doesn't side too strongly with either country. It's an American story, certainly, and we see the Iranian intelligence working just as hard to locate the American refugees as the CIA, but none of this is done in the name of politics. It simply adds one more ticking clock to a film that's already among the year's most suspenseful. End of Watch might still trump this in terms of situational tension, but with Argo, Ben Affleck has proven that he knows exactly how to keep an audience poised on the edge of their seats. Good for you, Daredevil.

MINORITY REPORT: I always figured I'd be played by Chris O'Dowd or Seth Rogan, but ok, Affleck, I won't complain ... What do you mean this movie's not about me? - Martin R. "Vargo" Schneider