EXPECTATIONS: I've scratched my head until it's bleeding trying to make heads or tails of the trailer for Seven Psychopaths, but considering that writer/director Martin McDonagh's last film, In Bruges, was similarly difficult to market and turned out to be one the best films of the 2000s, I'm willing to follow him down the rabbit hole -- even if that rabbit hole takes him from the magical, photogenic Bruges to a significantly less-magical, sun-bleached Los Angeles. And even though Brendan Gleeson didn't sign on for Seven Psychopaths, at least we have Colin Farrell in full-Irish mode, along with a host of great character actors: Sam Rockwell, Christopher Walken, Woody Harrelson, Harry Dean Stanton and Tom Waits. 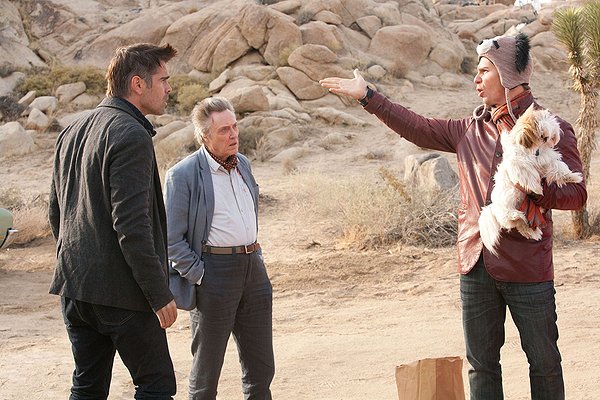 This is probably hilarious.

REALITY: Perhaps it's unfair to judge Seven Psychopaths against In Bruges, but 2012 is already full of mild disappointments. Seven Psychopaths falls into that category, sharing space with Seeking a Friend for the End of the World, Looper, Dredd, Sinister and V/H/S on a list of good movies that were frustratingly not-great.

The key to In Bruges's greatness was its relative simplicity, pitting three well-developed characters against each other in a no-win situation. There were red herrings, sure -- a Belgian femme not-so-fatale, a racist midget, a half-blind skinhead -- but, illustrating the old Hollywood rule of narrative economy, each of these apparent red herrings finally plays an instrumental role in a brilliantly orchestrated ending. Contrast that with Seven Psychopaths, which, at its most basic level, follows screenwriter Marty (Farrell) into a writer's crisis as we lose our footing and the line between the film's reality and the fiction of the film within the film. His goal, seemingly unattainable, is to write an action-thriller (titled, of course, Seven Psychopaths) that preaches the value of peace, a film in which the characters put down their guns and realize the value of compromise and forgiveness. And so he agonizes, distracted by the antics of his dog-napping best friend Billy (Rockwell).

Once upon a time, this was a great idea for a film, but Barton Fink and Adaptation. perfected the existential crisis of the idea-less writer; as such, Seven Psychopaths frequently feels like it's trying to reinvent the toaster. 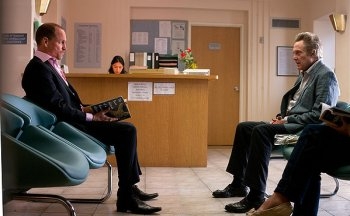 Woody and Chris both recognise each other in the doctor's waiting room and wonder if it's a good time to ask for an autograph.Strongly developed characters were key to the successes of Barton Fink, Adaptation. and In Bruges. As Marty begins interacting with the seven titular psychopaths, who may or may not be figments of his imagination, they gradually eat up larger chunks of the screen time. Marty alone simply isn't very interesting, and he's crowded out of his own film by two-dimensional characters who exist only so some of Hollywood's most magnetic personalities can get their fair share of screen time.

That's not to say I didn't enjoy Seven Psychopaths. I did, but I spent most of the movie feeling nothing but amused by the random bursts of comically graphic violence, the generally witty dialogue, the gorgeous cinematography, the unusually strong cast, the subversion of action tropes and the one or two genuine surprises. But, goddamnit, is it too much to ask for more?

The kind of empathy Seven Psychopaths fails to develop is integral to true comedy, to the kind of payoff this film seeks but doesn't earn. Hell, the most empathetic character in the film, an unnamed ex-Viet Cong out to avenge his family, has less than 10 minutes of screen time before he engenders the most inspired moment in Seven Psychopaths. I want more of him. I also want Walken's, Rockwell's, Harrelson's and Waits' characters to exist in three dimensions, to have something to do beyond chewing scenery. And I want a central protagonist who's an active player in his own life.

The characters' various eccentricities dovetail with an intentionally confusing narrative to make Seven Psychopaths seem more complex than it really is, but if you see Seven Psychopaths -- and you should, despite my complaints -- ask yourself the following questions: What exactly happened in Seven Psychopaths? What is the point? If there is a moral, what is it?


Joel and Ethan Coen used Barton Fink to exorcise their joint case of writer's block during the making of Miller's Crossing. Considering four years have passed since In Bruges and this is all McDonagh could come up with, I suspect there's a reason our protagonist is an Irishman named Marty and Seven Psychopaths is less than a whole movie: McDonagh never beat that blockage.

MINORITY REPORT: The best way to sell any film is to focus on the amount of psychopaths in the cast. In this case, seven. Seven seems like a lot, maybe too many for the American public. Remember Psycho? Just one psychopath. That's the golden amount. One. - Ian "Professor Clumsy" Maddison