The Perks of Being a Wallflower

EXPECTATIONS: I've never understood the desire some people have to compare films to their book counterparts. Movies are movies. Books are books. They are completely different in the way they communicate ideas and themes to their audience. There's no point in analyzing every microscopic deviation from the source material. And for the love of god, quit hitting me in the arm every time the movie changes something from the book and you didn't like it. I didn't write the script!

Anyway, this leads me to the oddness of The Perks of Being A Wallflower, a book I thoroughly enjoyed. What's unusual about Perks is that the film was written and directed by Stephen Chbosky, the author of the book. I'm not sure how I feel about this. Clive Barker is the only other person I can think of who has done this successfully, and that's using "successfully" in a very loose sense.

If you're an adaptation purist, you're probably excited about this, but you really shouldn't be. Your right to whine and complain and make yourself sound sophisticated by saying "The Book Was Better" is being taken away, because this is the way the creator of the characters meant you to see them. If you don't agree with it, tough. You're the one who's wrong, this is the "correct" way to see the story. However, there are ways to get around this. Let me tell you all about French critic Roland Barthes' literary theory "Death of the Author." ...Hello? ... Are you still there?

REALITY: Every critic I see that reviews this film wants to compare it to The Breakfast Club, and I don't see that as being entirely accurate. I have nothing against John Hughes, but his reverence for the high school cliches he helped create often times got in the way of the truth, which is that his characters were usually a bunch of assholes. Perks of Being A Wallflower is not only aware of this, it also revels in it. High-School Art Kids really are a bunch of pretentious idiots, but there's something beautiful about their naivety. I may just be saying that because I'm still being one, but there's truth to it. 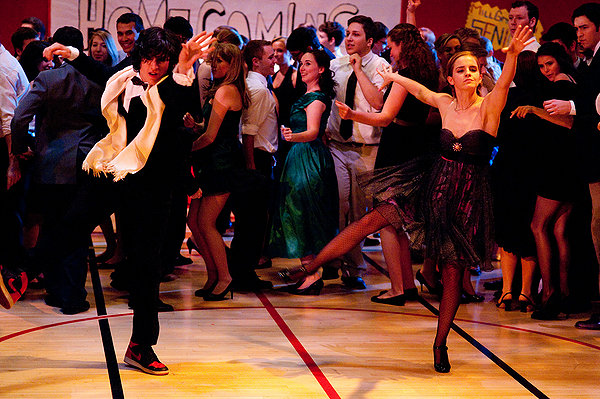 Logan Lerman, a young actor I've enjoyed since 3:10 To Yuma, plays Charlie, a high school freshman with mental issues that are hinted at early on. Charlie is a smart boy who doesn't participate much, but like all high schoolers, he secretly wants to be accepted. In a few moments of bravery, which Lerman shows as being almost painfully difficult, he befriends two seniors, Manic Dream Girl Sam (Emma Watson) and her gay stepbrother Patrick (Ezra Miller). Sam and Patrick become close friends with Charlie - because he's a likable character - and they introduce him to parties, angsty music, drugs, and all the teen drama from the first three seasons of Degrassi.

There are a lot of overblown topics covered in this film. I mean, a lot. Mental issues, slut-shaming, bullying, closeted and open sexuality, and a surprise issue the film is building toward that appears in the last ten minutes! As a result, some of it feels unfulfilled. Charlie's relationship with his English teacher Mr. Anderson (Paul Rudd), for example, seems like a detail that could have been omitted without much effort. However, it all seems to fit, because high school itself is melodramatic and unsatisfying, especially for Freshmen.

That's what separates this film from other teen movies: It dedicates itself to being as real as possible. There aren't insanely witty quotable lines like in Easy A or Clueless, but people say things that are occasionally pretty deep. I'd also like to point out the ballsiness of this film showing teenagers who party and smoke weed responsibly, which means that no one jumps off a roof or has a wacky adventure. Instead they sit around, eat, and talk about bullshit, which is what you do when you're high. 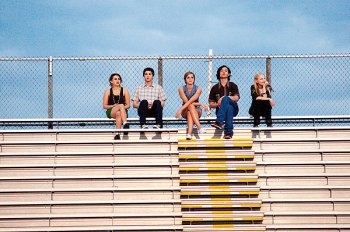 High school movies must have some legal requirement to include a scene like this.I liked Perks a lot. It's a film that revels in imperfections, which is why it's fine that it's a first- (technically second) time directorial outing. Chbosky doesn't try to convince us that there's some kind of purity to being a teenager, and that adulthood is evil and we shouldn't ever grow up. Exactly the opposite; in fact, there are clocks all over the place, kids counting the days until they become adults. It's bittersweet and saccharine at the same time, and Chbosky's smart enough to pull it off.

Watson, Miller, and Lerman are so perfect together that you have to like these characters, in spite of their flaws. You want to go to a high-school dance and dance a choreographed routine to "Come On Eileen." You're ready for Emma Watson to take her place next to Natalie Portman and Zooey Deschanel on the list of Art-School Crushes That Will Be Called Fake Next Year. It's a dream-state movie, and when you're enjoying a film in a dream state, one little nitpick can ruin the whole thing.

A minor plot point in the film involves the trio hearing David Bowie's "Heroes" on the radio and spending months trying to figure out what song it is. And I just had to wonder... How? How can these kids, these kids who love Rocky Horror Picture Show, spend time in record stores, and have conversations about The Smiths not know an incredibly popular Bowie song when they hear it? How do they not know who David Bowie is? Do they live in a world where Labyrinth was never made? Can I live in that world?

The only way to overlook this, and I'm going with it, is to realize that these kids are poseurs, if only a little bit. And that's okay. Because when you're in high school, you think you're deep and meaningful, but you're really not. But maybe there's something deep and beautiful about that? Maybe? I don't really know. What I do know is that Perks is a very good film with solid performances that will probably fade into "cult classic" obscurity unless you watch it, so you should do so.

MINORITY REPORT: Martin, you need to get your head out of your high school fantasies, you're 46 years old now and it's time to pull your jeans up, take off the friendship bracelets and stop hanging out in the schoolyard. - Ian "Professor Clumsy" Maddison