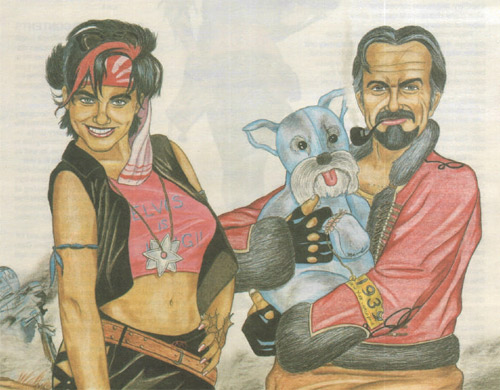 Zack: It looks like the family unit from one of the later Heinlein novels.

Steve: So what does that mean?

Zack: It means the dog is the dad who time-traveled out of a movie, the woman is the man's grandfather, and the man is actually the woman too, but from an alternate matriarchal earth where women oppress men and dominate politics.

Zack: I don't want to know.

Steve: It involved you, and you were my mom, and you wanted me to get you a banana that khal drogo from game of thrones stole but then when I couldn't get the banana back you turned into my gym teacher, only you were a tiger version of him wearing boxing gloves like king from tekken.

Zack: Keep me out of your homoerotic dreams.

Steve: There was nothing homoerotic about it dude. You beat me up for like an hour and then we went to a special place down below the house where there was a fountain of all the ice cream we could eat blasting up into the air like lava. Then we turned into horses and ran on a beach.

Zack: Didn't this start with me telling you I didn't want to know?

Steve: Does anything really start or is it always happening and we're just waiting to catch up with it?