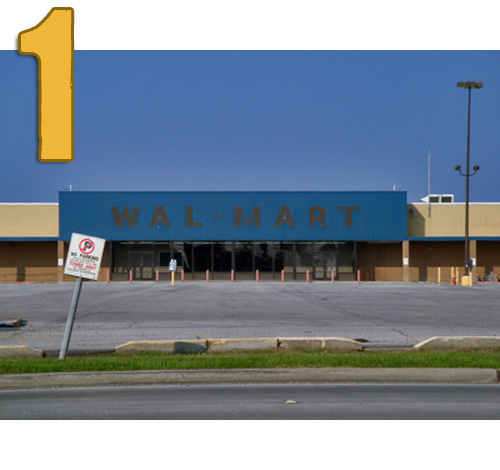 The very first Wal-Mart store in Florida, built in 1985, was closed in 1997 and by 2001 had fallen into disrepair. It has since played host to a variety of potential businesses, including the world's first mega pedicure salon able to give 650 simultaneous pedicures. In 2003 it was filled with snow and opened up as a place for people to rent skis and enjoy cross-country skiing. In 2005, Florida's third largest head shop and gun store opened offering a variety of tobacco pipes, water bongs, hookahs, and semi-automatic shotguns.


Finally closed in 2007, the Wal-Mart has since been gradually reclaimed by nature. Owls now nest in the rafters. A family of deer graze on the grass that sprouts from overturned shelves. Wildflowers attract bumblebees to what used to be the McDonald's and at night the fireflies drift in through the holes in the ceiling and illuminate the darkness like hundreds of stars. Also there are some people who huff paint out of paper bags if you want to hook up with them.