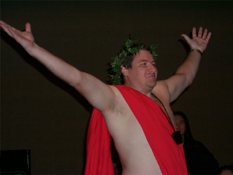 Jake Simpson as you've never seen him before... or wanted to see him. You can click on the image for a larger picture, but I wouldn't recommend it. Beware, coward!

Angela and I soon made our way to the other vendor booths and ran into Raven Software's Jake Simpson, who just came back from ingesting raw heroin in the men's bathroom. Jake is definitely one of the most "interesting" developers in the industry, especially considering I still have no clue what exactly he spends all day doing. According to Raven Software, the guy's a programmer, but I don't really believe that. I'm under the firm impression that one day Jake accidentally wandered into their offices, took a seat in a cubicle, and has been returning to work there every day since. Nobody really asks what he's supposed to be doing or why he still shows up every day because the entire Raven crew has to spend all day charting what new and exotic countries Soldier of Fortune is being banned in.

Simpson, Jarrod Showers (artist), and Rick Johnson (smarty programmer man) were all showing off their newest build of Star Trek: L33T Force's holomatch. In case you're not as "technologically savvy" as I am, their "holomatch" is a lot like standard deathmatch except... well, actually it is standard deathmatch. I guess they just had to change the name so it wouldn't upset the rabid Star Trek fans who write angry letters to their congressman every time they feel Romulans are being unfairly represented on TV. Star Trek: L33T Force seems to revolve around shooting various laser beams at other people in Star Trek uniforms, and will probably have enough Star Trek references to please even the most die-hard of geeks. Based on my playing experience, here's the rundown of the weapons in the game:

Gun that shoots orange beams - somewhat weak. Used only if you run out of ammo for everything else.
Big object that emits lots of green lines - strong. The alt fire also spews out a green blob which explodes.
Something which shoots out something that curves around and explodes - stronger. I don't remember what the alt fire was, but chances are it explodes too.
The exploding gun - really strong. Causes things, such as your own character, to explode.

The levels weren't really anything that impressive, as the Borg ship had obnoxious Daikatana-caliber lighting and the combat castle was littered with tiny hallways which wrapped around in annoying circles, but the gameplay made up for it. I had no idea what any of the weapons were, what ammo they used, or how to use them, but my innate ability to center a crosshair over Jake's character and press the "fire" button allowed me to (as the kids these days say) "rip shit up". However, now that I think about it, he probably just let me win so I wouldn't badmouth his game on my website, so the whole competition really feels like a hollow victory. On a more positive side, I did get to see Jake wearing a Something Awful / Jeff K. t-shirt, so that... wait. That's not really much of a positive thing. In fact, seeing Jake in that shirt has now scarred me for life. Here's a couple of exclusive Star Trek: L33T Force screenshots to get that image out of your mind.

Rick Johnson, who despite not being a member of the AARP is a senior programmer at Raven, eventually appeared and we talked about Soldier of Fortune being banned in British Columbia. In case you've been living under a rock (or you actually have a social life), British Columbia has found it fit to ban Soldier of Fortune from their various Canadian stores, giving it essentially the same rating as hardcore bondage porn and requiring it to be sold in the back rooms. This is because British Columbian citizens are obviously so incredibly impressionable and weak-minded that even the mere mention of violence will cause them to drive to America, purchase an assortment of handguns, and then start shooting up people in line at Dairy Queen. The same goes with banned sex videos; if a Canadian is exposed to a picture of somebody receiving oral sex, he tears off his pants in less than two seconds and begins to place his penis in the closest hole which doesn't contain sharp pieces of rusty metal. Canadians have a very different culture than America, one which tries to downplay and extinguish all forms of sex and violence. I dub this culture "really stupid."

Angela and I slipped out to grab some authentic fake Mexican food from some restaurant called "El Fenix". It was fairly uneventful, except for the fact that I spilled salsa all over my pants and we were seated next to a famous celebrity. Yes, we were lucky enough to score seats next to one of the hottest and exciting stars in the world today, somebody with so much charisma and raw energy that merely being in their presence is an experience one will never forget. As you have probably guessed, I am of course referring to Retarded Melty Creature. Seeing this magnificent creature scarf down corn tortillas and lemonade was almost a religious event. I was at tears near the end of the meal, and my heart will always feel a bit empty knowing that she is no longer a part of my life. Wherever you are Retarded Melty Creature, I love you!