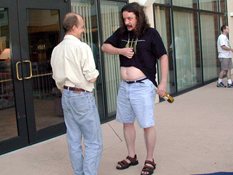 The Levelord shows off where he stores his weed. Well, one of the places at least. I would thank Phalex for the pic, but after seeing it, I'm not too thankful.

Since we were staying in the part of Texas where time progresses in a linear fashion, day two rolled almost directly after the completion of day one. The weatherman had informed us that a cold front was sweeping through Texas, so the temperature dropped to a cool 150 degrees. In Texas, this kind of weather is referred to as "pool inflatin' weather", which means people actually dismount their lawn tractors and horses long enough to pump some air into their Little Mermaid pools. While we weren't fortunate enough to make it into a Wal Mart so we could purchase a plastic tub, we did have the pleasurable experience of sitting in traffic for two hours, trying to merely get off the exit ramp on the highway. Yes, "Buy Your Children Dallas Cowboys Underwear Because It's Tax Free Day" was still raging on, drawing in hundred of thousands of people from mystical foreign lands to visit Mesquite's only mall. Luckily Angela and I weren't in the mood to buy some NASCAR tube socks, as we had better and much more exciting things to do: head to QuakeCon and absorb the copious amounts of gamma radiation emanating from the thousands of video monitors inside.

Since we weren't really on any set schedule, our QuakeCon experience was just about as flexible as a Spanish hooker (sorry, I got one of Voodoo Extreme's one liners stuck in my article). We showed up, avoided the gigantic room containing the hundreds of insane people trading mpg videos named "Brittanyspears201" and "bukakeBrittany96203", and mulled around the developer room. Yes, the developers area was where all the "action" was taking place (read as: many insane people were in this room as well, but they were insane people who weren't trading porn and warez). Some of the id Software employees were playing Q3:A and beating up on hapless gamers, honing their rail skills on one of the worst maps in existence. We later found out that their secret to their success revolved around the fact that the id people chose the least popular map and played it nonstop for weeks, continually practicing and getting better for the sole reason of pounding on people at QuakeCon. I personally applaud this kind of nefarious tactic, but I am kind of worried that id might take this too far. I mean, what if Tim Willits and Xian decide that they want to be the kings of Doom 3 and end up making every single map for the game resemble something we'd see on Cranky Steve's Haunted Whorehouse? I think it would be great, but I've noticed that the kind of things I enjoy aren't usually that popular with the non-incarcerated members of society, so this probably wouldn't be a good thing.

Unlike last year, when ATi had their crap plastered all across the conference hall, it was nVidia's turn to rule the QuakeCon video card niche. Jim Black, the officially sanctioned nVidia representative (he drew the shortest straw, lost the bet, and was shipped off to the convention), represented his company's new GeForce 2 card by standing around while other people played Q3:A on it. I would imagine that being a graphics card spokesperson for an event like this must be incredibly boring, second only to professionally licking stamps.

I mean, at least people demoing a video game can show off the graphics and gameplay, but what can a video card rep do? Talk about system specs? Show their card running the exact same game that's being played on hundreds of other systems? Stand around and cross their arms in front of a banner which has their company's logo on it? You'd be pretty limited in a position like that.

The tedium seemed to be getting to Jim Black's brain as well, because as soon as I started talking to him, he started acting as if a few hundred pounds of sugar had instantly lurched into his bloodstream. He began talking really fast and gesticulating like there were a whole bunch of invisible bugs flying around his face. Despite the fact that I couldn't really tell what he was talking about 90% of the time, Jim turned out to be a really nice and friendly guy. Hell, everybody I've ever communicated with at nVidia has been extremely friendly and social, at least until I start asking about Unreal Tournament's performance on a GeForce 2 / Athlon system. Then they stop talking. Their company has probably put a death warrant on Tim Sweeney's head after the amount of times I've pestered them, asking how the hell to make UT playable on my Athlon system.

Regardless, Jim was the kindest psychopath I've ever met at a gaming convention. He allowed me to talk for hours on end about my site and what inspires me to write as Jeff K. - er, I mean, what's up with that crazy kid Jeff K., who I am not personally affiliated with in any sense of the word - and revealed that a lot of nVidia folks are Something Awful readers. While it scared me to know that human beings have actually printed out and put up Jeff K. comics outside their cubicles, it was fairly refreshing to see that everybody at nVidia has a good sense of humor. I would imagine the PR department's fulltime position of bullying tiny little defenseless websites and shoving handicapped children into oncoming traffic has caused them to develop a pretty jovial personality. Jim provided me with a swank nVidia polo shirt, an article of clothing nice enough to be buried in, and a couple blinking nVidia bouncy balls. Whenever these ball are thrown at a flat, dense, hard surface (such as the floor, a wall, or Redwood's head), the little lights inside the clear ball light up and start flashing like an epileptic's worst nightmare. Yes, nothing says "our video card has the best visual quality and blazing speed" quite like a clear ball with a couple blinking LED lights inside. They also had really cool nVidia leather jackets, but they didn't give one to me, just Anna Kang. It made me cry. I would've tried to beat her up and take her jacket, but she could probably kick my ass. I would've LOVED to have an nVidia jacket because I think I'd just look so cool wearing one on the surveillance cameras when robbing a 7-11.