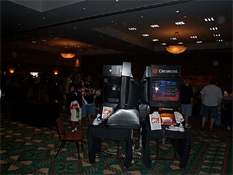 An actual photo of the inside of QuakeCon. I apologize for putting a real, legit picture in this article.

We checked into the conference, picked up our passes, and proceeded to "mosey" around the conference (that's some Texan slang for y'all). Angela was instantly impressed by the quality of clothing people chose to wear to this illustrious event. I attempted to explain to her that 90% of a gamer's wardrobe consists of clothing that was handed out by network component manufacturing companies at LAN parties. A true sign of "l33tness" is how many weeks one can go through without wearing the same video card manufacturer's shirt twice. The gaming culture is remarkably different than any other group of protein-based life forms that currently inhabit this world. For example, practical things such as the speed of your CPU and how much RAM your computer has outweighs cosmetic factors such as if you've taken a shower in the past decade or if your hair has enough grease to lubricate every inch of Rosie O' Donnell's body. Gamers won't mock or humiliate people because they don't have enough fashion sense to figure out that wearing kneehigh socks with sandals makes you look like possibly the most dorkiest creature outside of a Dave Berg cartoon. It's like some kind of modern love-in, except for the fact that everybody in the room wants to kill a digital representation of you, and 99.9% of them are male.

By that time it was quite late in the evening, so Angela and I decided to check into our hotel and do some role-playing as the sheep herder and his naughty little sheep. I don't want to go into any further details, as they may shock and disgust you, but let me just point out that the towel racks at the Courtyard Inn can't support a 160 pound man hanging upside down. You may want to remember that next time you choose a hotel to stay at.