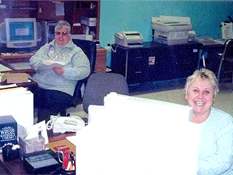 The first QuakeCon looked a lot different than what it is today. For example, the only two players were Betty and "SuSaN [ACCOUNTING]"

First off, we had an uber-geek lodged in the seat in back of us, a guy so spaced out and fruity that he brought his very own seat cushion to sit on. Yes, this man carried on his own his own seat cover so he could lay it on top of his seat and provide extra comfort to his fanny-pack wearing touristy ass. It was about the most disturbing thing I've seen since my parents showed me the home video of when I was ten years old and I humped my sandbox. Another dreg of humanity waddled onto the plane and proceeded to go through his luggage in the overhead compartment every 16 seconds or so. Yup, regardless if the plane was flying, taxiing, landing, or going through turbulence, this guy would stand up and go through his suitcase nonstop. I have no idea what the hell he had stored up there. I'm guessing it was another family member or something, and the guy kept getting up to give it food. I'd hate to think that he was just an idiot.

Of course, the flight wouldn't be complete without an elderly grandma sitting on the other side of the aisle. Yes, complying with governmental regulations set forth back in the mid-80's, every flight has to have at least 10 decaying old people on each plane. This is to remind all of us that life is a precious, fleeting experience and that while we're sitting on a plane doing nothing but reading the ads for the high tech lawn furniture they're selling in the back of the airline magazine, we're getting much closer and closer to dying. Anyway, the old lady was seated next to some poor Asian college student who was forced to respond to her every time she made some various comment about the weather or the airline or her grandchildren or whatever exciting thoughts fluttered through her brain. Old people tend to talk a lot on flights because that's the only way other people can be sure they haven't died yet. If they stop talking for even 10 seconds, elderly folks are afraid that officials will descend upon them, grab their bodies, and toss them into a funeral plot. Instead of forcing these folks to blabber all day about God knows what, somebody should make a simple device which attaches to these old people and displays a beeping sound once they passed on to the afterworld. Regardless, the Asian kid was in the uncomfortable position of having to respond with "oh really" and "interesting" after every inane comment the elderly lady made. I would've tried to help him out of his situation but some guy was constantly going through his suitcase and blocking the aisle. 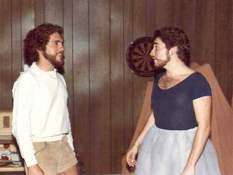 I cannot think of a witty caption to insert under this picture, but pretend I made some reference to Adrian Carmack.

Eventually, as most planes have a tendency to do, our flight returned back to the Earth and landed. The Official Greeting Service of Texas, a solid wall of 100-degree heat, bitch slapped us as soon as we exited our plane. As Shaithis phrased it last year, it's that "good ol' cool Texas breeze", a weather system which is so hot that it has actually been known to cause water to catch fire. Welcome to Texas, now start sweatin', Yankee pig!

After putting up a valiant fight with the heat and the rental car agency people, Angela and I jumped into our newly acquired Saturn and headed off straight into the congested highways and exits of Mesquite, Texas. If you ever thought traffic in your state was bad, you should try driving around Mesquite during QuakeCon. It's fucking nuts. People are lined up for miles to get off the exits because QuakeCon takes place during "tax-free clothing back-to-school weekend" or whatever it's called, a couple days where Texans don't have to pay sales tax on clothing for school (I'm not making this up). So, under the influential lure of saving up to three dollars in sales tax, all the families board their white Ford trucks and head to the mall so they can grab a snazzy Rusty Wallace NASCAR t-shirt for class. Every single branch of road is bloated and swelling with rusty trucks and minivans, making the entire state of Texas resemble a huge Garth Brooks concert. If you ever attend QuakeCon and plan on going anywhere outside of the convention hall, you'd better plan on traveling via helicopter, because you sure as hell aren't going to get anywhere in a car.

ADDENDUM: I have been informed by "special" reader Zven Hoilgen that my sweeping generalizations regarding Texans are somewhat inaccurate. He claims Texans are not limited to driving only white Ford trucks, but some of the more adventurous citizens also drive white Chevy and white Dodge trucks. In addition, Texans do not like Rusty Wallace, they're all fans of Bobby LaBonte, who apparently is some kind of racecar driver from Texas. I cannot verify the second assertion, but since I'm lazy, I'll assume it to be true.

We finally fought our way through the cool Texas breeze and made it to the convention area, a hotel which is located next door to a huge rodeo stadium and a lot of hay. For all you "outsiders" who are unaware, Texas is notorious for two things:

While I am able to understand why there are so many Texans who have chosen to live in Texas, I can't quite figure out the hay thing. At first I thought that perhaps the bales of hay which litter every square inch of land were simply really odd looking creatures native to Texas. However, I soon noticed nobody ever eats this hay, and this is the best way to tell if it's an animal or not in this state, as Texans seem content to cook and eat just about anything which has a pulse. If it has horns, they usually put barbeque sauce on it as well.