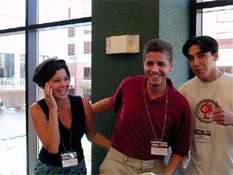 Angela and I pose for a photo with Phalex. Notice Angela's hand on my ass.

We wiped up our tears and promptly headed back to QuakeCon where we proceeded to do not much of anything for a few hours. Angela and I just sat around and made rude comments about everybody that passed us by. It was all justified though, as I have honestly never seen so many people wearing sandals with socks pulled up to their knees. It seemed to be the "in" fashion at this year's event, second only to wrinkling your T-shirt by backing a car over it repeatedly. This is probably the main reason why members of the general public don't believe that "professional gaming" is a valid job: everybody involve in the competition looks like homeless vagrants who were just beat up by the Police for urinating on a street corner.

Desperate to escape the horrid fashion disaster of the convention, we ran away and met up with 3D Realm's ace mapmaking legend Charlie Weiderhold. He was kind enough to show us around their offices, as well as give a tiny look at some of the ultra top secret Duke Nukem Forever. Oh man, he just showed us the most incredible things from that game, stuff you would not believe. It would blow you away. It would rock you off your collective asses. It would make Jesus and your religion look like a lie. It's so hardcore that merely thinking about it causes shivers to run down my spine. However, I cannot write about it because it's so hush-hush and ultra secret. If you want to imagine how fantastic the stuff was, just make a mental image of the coolest thing you can think of. Then think of something even better. Yes, it's that good. I'm sorry, what was I talking about again?

Anyway, Charlie, Angela, Keith Schuler and his wife Rose all went out for dinner at some place which combines the nonstop excitement of eating lettuce wraps with the... uh... nonstop excitement of playing video games. I forgot the name of the place. One half of the restaurant is a somewhat elegant bar and grill, and the other side is full of 10-year old Texan children wearing tank tops and screaming for their friend to add more credits so they may continue shooting a plastic light gun at zombies. Charlie and Keith explained that after a hard day of working on making games, there's nothing that they like more than to go to this place and play even more games for the rest of the night. It made sense to me, particularly after the sixth beer, which is when I usually start understanding a lot of things I wouldn't normally get.

The positive side to Charlie and Keith spending their time playing video games was in the fact that they weren't able to talk about underage girls as much while they were playing. You see, game level designers and artists like women. They really like women. Not as in "I like watching the Kansas City Chiefs play", but as in "I like to breathe oxygen in order to live." That's all they talk about. Every conversation invariably ends up discussing the bra sizes of supermodels. Our dining experience was no different, as Charlie and Keith covered such vital topics as flaming nipples, Japanese twelve-year old prostitutes, and various other things which would make excellent "Jerry Springer Show" topics. With all their talk about women, I can't imagine how anything ever gets done at 3D Realms, which is probably why... oh, nevermind. I'm not going to make the obvious joke here. I'll leave that to Planetcrap.

Oh yeah, it just occurred to me that I never even mentioned anything about the competitions at QuakeCon. It's safe to say that somebody with a name which has alternating capital and lowercase letters won the tourney or at least got second. It's also a good bet that a few hundred thousand people with initials before or after their name placed high in the rankings. Oh yeah, I almost forgot that people with 1's and 0's in place of I's and O's probably won something as well. Despite the fact that every gaming site feels the need to report on who won these competitions, does anybody really care? I know I don't, and that's all that matters.

Well, that and the fact that I'm a few dozen states away from Jake Simpson.