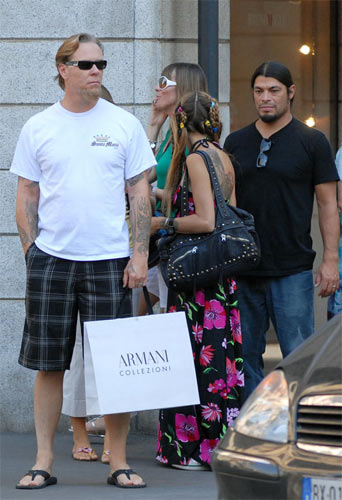 Death Magnetic Megathread - Skip to page 2 to read the meltdown of forums poster CharlesWillisMaddox who is so blinded by faggot love for Metallica that he doesn't see what is "funny or entertaining" about the above picture, as he accuses other Metallica fans of not liking them enough, or something. Some people will defend anything.

Songs that don't live up to their great intros - What songs do you think are the ultimate soundtrack to premature ejaculation?

Wolfmother no more - "Oh no, my favorite shitty band lost 2 of its 3 members. Time to take my anger out on hipsters, they're the reason Wolfmother sucks", or, "If enough people liked their music enough to make a record deal profitable they deserved a record deal. Indie music is almost universally garbage that people pretend to like to look hip, no one cares what crazy stuff you're doing if its unpleasant to hear".

"Dub": Just slap it on whatever the fuck you want - Here's something that nobody expected, an actual informative and interesting music discussion. Come educate yourself and possibly find some interesting new music!

Adbusters Article On Hipsters - I don't really know that many hipsters actually exist outside of the minds of internet nerds, but here are 4 pages of people discussing them. It's as interesting as it sounds!

Byrne + Eno: Everything That Happens Will Happen Today - The two big minds behind every music nerd's wet dream, Talking Heads' "Remain in Light", collaborate on a new album and now it's time to reach for the Vaseline. The album? Available for streaming and download in a couple of weeks. This thread? Right here, right now, ready for you to complain about Brian Eno collaborating with Coldplay.

Ranking all the big screen Comic Book Movie Super Villains - bbf2 takes us through his ranked list of 32 villains. For some reason Arnold Schwarzenegger is not number one.. I loved him as Dr. Freeze in Batman (Heart) Robin: "Get to da tumah!"

Things Writers Do That Bug You (But Just a Little) - I hate when John Byrne writes himself into a story. Did you know that he personally stood witness to the trial of Galactus and Marvel was okay with that? Oh but there's a good reason! In the Marvel universe version of Marvel Comics he was the writer of the Fantastic Four comic book while he was writing the Fantastic Four comic book for the real Marvel Comics in the real universe.

Ultimate Marvel Discussion: Sigh, The Beloved Country - Speaking of universes, Marvel has an offshoot called the Ultimate universe. It features a modern take on classic characters like Spider-Man -- who is still a young Jewish boy in New York -- and a very drunk Iron Man. It is currently being ruined by Heroes co-executive producer Jeph Loeb.

Funny Panel of the Week - Thanks, Satch 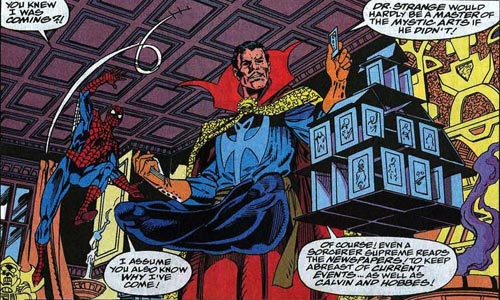 ShadowCatboy I'm sick of your shit - Shadcatboy is a self-described militant atheist. He's about as militant as a Garibaldi biscuit. He's also a wiccan ephebophile furry (surprisingly).

Everyone give a meaty welcome to our new piece of a man, Pastor Travis - Pastor Travis writes exceptional opinion columns about topics far reaching as; why he gets too hot, the things that are wrong with BBQ and what's with the high price of oats.

SexFatHomelyPhoneSexOperatorSexSexSEXSEXSEXSEX!!!! - If you ever feel the need to ring a sex line this is what you are speaking too.

Ladies, wanna have sum fun, I play videogames n im a GURL who loves gurls!! - ComputHER is your stereotypical fat, bi n' crazy girl but missed the memo where it says you have to be attractive to pull it off and instead created a gaming addiction to compensate.

barbako, you aren't a boring girl - Barbako has a ridiculous face and doesn't "get" showering.