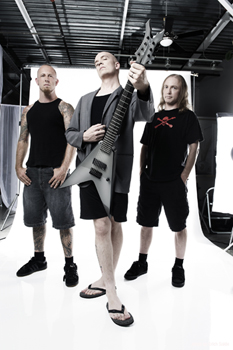 Just a cool dude, hanging with his friends.

SA: Would you rather be known as a "Rock Legend" or a "Metal God"?

DT: I'd rather be known as a cool dude to hang out with by my friends.

SA: Is there such a thing as "cheating" in music? Drum triggering/sample replacement always stirs up a fuss, pitch correction software like Melodyne has been used both as a fixer and a way to achieve a specific sound, and software like Ableton Live has allowed lots of people who don't necessarily play instruments to make their own compositions. Given that you've used all of these tools before, is there such a thing as going too far with music technology, or is it all about context and the final result?

DT: Well again, subjective. Some purists think using digital as opposed to analog delay is cheating. For me, my records are there as a testament to a point in time. Do I want it to be the best it can be? Yes. Does that mean on every record I use Melodyne and Ableton? No. Some songs benefit from imperfections, and some demand close to perfection. I have the skills and the tools for either eventuality. Bring it on.

SA: A stranger comes up to you and says "I have never heard your music before, so please pick three songs that you think serve as an introduction to your band(s)." Which songs do you pick?

DT: Maybe "Truth" off of Infinity, "By Your Command" or "Color Your World" from Ziltoid the Omniscient, and maybe "Numbered" from Addicted. But even at that, there's about 10 missing dynamics.

SA: The progression across your albums plays almost like a comic book series or serialized TV show, with subtle hints to old songs, repeated lyrics/notes, and in the final song of Addicted, you even have an almost, "on the next episode of..." sneak preview of Deconstruction. What drives you to put in those little callbacks?

DT: Well, it all comes from the same mind. I think the nature of how I write is based on a direct correlation to emotional and spiritual development, so it's the same character in a different 'suit' (so to speak). If the character interests you, then there's a good chance that the different suits just make for interesting and varied listening experiences as opposed to a complete shift of theme. I'm lucky that my process is fairly unique in this way, as it provides less of an irritating stylistic shift and more of a different aesthetic to an ongoing story. Nothing drives me to it other than 'the muse' (if you subscribe to that).

SA: I am always impressed at how well you use the available "space" in a song, whether it's the roomy and sometimes distant sound on Ki (often contrasted with an intimate chorus), the wide and deep feel to Ocean Machine: Biomech, or the ultra-saturated but still often quite detailed huge field of sound that you get on your heavier tracks. Any tips for someone just trying to learn the ropes of recording?

DT: Eq your layers to fit with each other. The idea of shelving is pretty important to achieving senses of space. Sometimes, if you have ten layers of vocals going on, you have to radically eq things and pan things differently from each other to separate them, otherwise, it turns into this sort of muddy 'cloud'. It's all trial and error, though. I've never had formal training, just lots of good teachers and lots of public failure -- both equally important.

SA: Do you think the Canucks will win the Cup this year?

DT: If by Canucks you mean "middle-class, white Canadian male musicians named 'Devin Townsend,'" and if by Cup, you mean "sexual Intercourse tonight,"... then no.

Thanks to Guzwar, Joey Donuts, Minto Took, Bubba Smith, Rusty Kettle, Diet Coke Can, gingivitis the wart, Agreed and jiker for contributing questions used in this interview. And watch NMD threads for the next Q & SA opportunity!