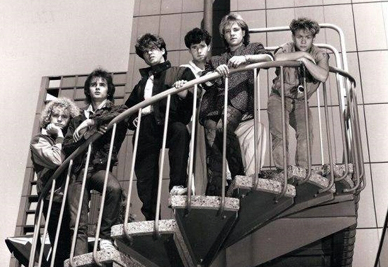 After the "Money for Nothing" episode, we found ourselves a tad out of sorts. We were in a downward spiral, which we blithely illustrated by posing on this spiral staircase. Also, we chose this backdrop because Sparks had started shrinking. He claimed a medical condition, but I suspect a vengeful curse. Regardless, at his request, we compensated for his miniaturization by arranging ourselves in ways that obscured his stature. 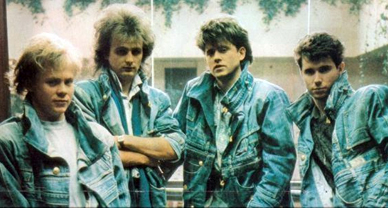 Our manager told us to outfit ourselves entirely in denim. "Nothing looks tougher than jeans," he kept repeating. He's dead now. Anyway, only four of us went along with it. 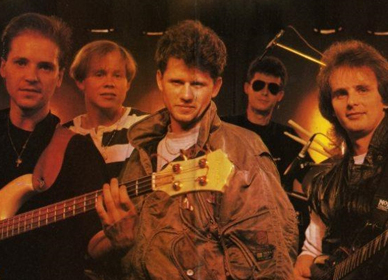 I shudder to recall the '90s. We pawned our bongos and aeroplane (for which I hardly believe we received fair value from the shopkeep). We hired American rock icon Lou Reed, the sun-glassed ghoul skulking in the background, but he just kept staring into a mirror and pretending to peel off his skin. Sporadically, he would smirk at us and curse. We became buskers, playing acoustically on the streets for pity coins. Sparks, poor pathetic chap, tapped gamely at his keyboard, which was, of course, quite unplugged. 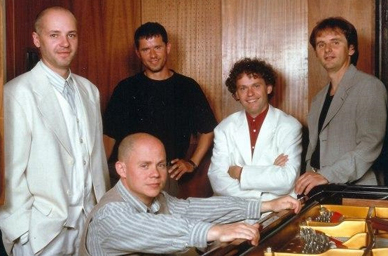 Here we are, looking right respectful at the onset of the 2009 First Floor reunion tour. The posters read "As Seen in a Classic Video by The Dire Straits," a billing about which I felt ambivalent, though our publicist assured us it was a masterful strategy. A new generation of "Money for Nothing" viewers sought First Floor through Internet searches for "Baby, Baby," which were fruitless because we meticulously destroyed all traces of that video's existence long ago. However, they found our other gems, such as "Dancing Dracula" and "Happy Metal," and they learned that First Floor is nobody's punch line anymore! Sparks, in the foreground, is pretending to lounge on a stool, but he's standing. 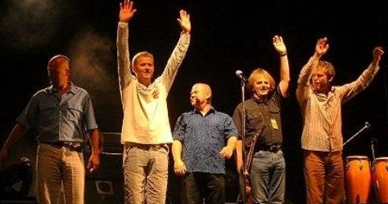 After The Dire Straits lampooned us, we'd get a lot of heckling at concerts, like, "hey, faggot, how's your jet?," or "oi, faggot, spot me a pound," or "I say, fruitcake, is that homely floating head the ghost of your ugly mum?" But now, I feel like people really respect First Floor. The crowds are much smaller, but they're very appreciative.