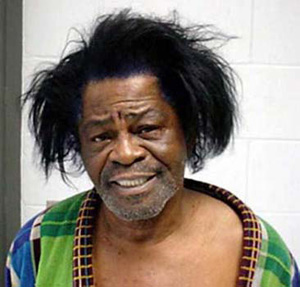 James Brown: Papa don't take no mess.As for the rest of R&B's tragic figure rogues gallery, Ray Charles didn't let blindness stop him from impregnating nine women. James Brown weathered tax troubles, repeated incarcerations and a sub-par Weird Al parody. Sam Cooke died a sordid death in a seedy Los Angeles hotel, naked save an open overcoat and a single shoe. His final words: "Lady, you shot me." Jackie Wilson was shot by a jealous lover when he entered an apartment accompanied by one of Cooke's ex-girlfriends. He suffered a heart attack on stage in 1975, right after delivering the line "my heart is crying."

Al Green suffered third-degree burns when a friend suffering a mental breakdown assaulted him with boiling grits, then committed suicide inside his house. In response, he underwent a 40-day fast and purchased a church. Instead of getting to watch these eternally fascinating stories unfold, the modern R&B viewing audience had to settle for Being Bobby Brown.

"With a spatula in her hand, like that's gonna do somethin'."The current R&B roster contains a few compelling characters, most notably R. Kelly, known for his 22-chapter batshit infidelity extravaganza "Trapped in the Closet" and his alleged urine-intensive dalliances with underage females. Mostly, though, today's performers enjoy decadent lifestyles, about which they brag during vapid lyrics. During "Upgrade U," Beyoncé sings "Audemars Piguet you/Switch your neck ties to purple labels," making materialistic references so esoteric in their exclusivity that 99 percent of her listeners won't know what the fuck she means. Songs like this appeal to that baffling Cribs-viewing section of the population that gets vicarious thrills from witnessing the exhibitionism of the ostentatiously wealthy. Me, I assume platinum-selling musicians are probably rich and don't give a damn about the details.

This image just screams "The way that I love you."Today's luxuriously sheltered R&B artists occasionally engage in role play, fantasizing about the passion-driven violence that their predecessors actually experienced. Rihanna's "Unfaithful" likens infidelity to murder (I might as well take a gun and put it to his head), while Ashanti's "The Way That I Love You" elevates that concept several stages on the psychotic scale. Ashanti compounded her oddly gory video with an outrageously ill-advised viral clip staged as a customizable news report about copycat stabbings. This "Gotcha Gram" attracted protests because of its glib treatment of domestic violence, but it also deserved to be banned because of its unforgivable use of the hackneyed "stiff white-guy voice recites urban slang" gag.

In a relatively recent development, modern R&B lyricists have embraced metaphors and similes to a ridiculous extent. Sensing that direct requests such as Gaye's "Let's Get It On" lacked a certain poetic panache, the sort of thing that might appeal to high school English students, seduction bard R. Kelly likened sex to the following: 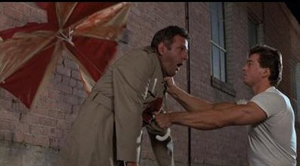 Never accept Ricky's invitation to stand under his umbrella.Rihanna's "Umbrella," a rare non-sexual metaphor, completed the cycle from "literary device signifying comfort and companionship" to "literal advertisement for a physical item" when she started peddling her own line of parasols. Shockingly, the pink model with "Rihanna" printed on it in large letters appears to have sold poorly.

These days, the duet is as rare as a straightforward sex solicitation. Male R&B artists used to duet regularly with female singers, developing chemistry over the course of several recordings. Gaye made entire albums with Tammi Terrell, until she wilted into his arms on stage in 1967, due to what was later diagnosed as a brain tumor. When she died a few years later, an inconsolable Gaye engaged in lengthy conversations with her casket, then quit music to try out for the Detroit Lions. That guy really had the right answer for everything.

Singing with no air: Apparently possible.Recently, zaftig American Idol "winner" Jordin Sparks and Stomp The Yard casualty Chris Brown attempted to resuscitate the format by trading the line "Tell me how I'm supposed to breathe with no air." As a single-artist song, "No Air" would be conceptually ridiculous. As a duet, it's even more nonsensical: If both parties desperately want to reunite, what's keeping them apart? It's like listening to two people in front of a buffet whine about their starvation instead of digging into the food troughs or cannibalizing each other for survival.

With modern R&B, listeners must take the good (some of Timbaland's beats) with the bad (all of Timbaland's clumsily rapped cameos). The classic R&B sound died as dramatically as its storied practitioners, and it's counterproductive to assign modern performers the messianic task of resurrecting its corpse. Lauryn Hill made a semi-decent Stevie Wonder album back in 1998, had it anointed as THE BEST FUCKING THING EVER BY ANYONE, and became too creatively petrified by the outlandish expectations to attempt a follow-up. However, if left alone, R&B stands at least a cryogenic corpse's chance of eventual revival. Modern R&B might be the disreputable heir of a proud lineage, but it still contains traces of the genetic material. With, say, emo, a stillborn genre just begets more stillborns. Speaking of which, it's worth noting one example of genuine progress: White dorks still cover popular black artists, but this time the original performers retain the royalties.