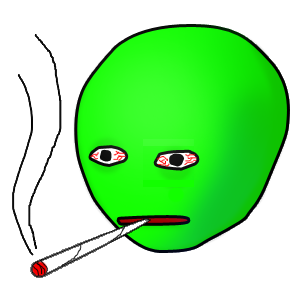 I don't really know what it is, but for some reason, I have been able to "read minds" to a degree while stoned off my ass. Not all of the time, or all that often at all. I do have certain nights though, where my friends will start a sentence like "Well, why don't you-" I cut them off, "No, that's a bad idea." The friend then asks me what is, and I explain their idea in detail (This has happened a couple of times. M4g1cky was there at least once.) Also, when M4g1cky and I smoke, there's almost no need for verbal communication. We just look at each other when we want to pack another bowl, get food, change the channel, or whatever and the other instantly understands. We even know which piece the other one wants to use.

I managed to get myself pretty god damn high one time, I smoked 3-4 bowls in a row, hadn't smoked for weeks. I was sitting by my computer, chilling to some music, and suddenly my heart started racing like hell. So I laid down on my bed, cradling a pillow, trying to relax. My heart was pounding so hard and so fast it was like it completely overtook my existence. I wasn't worried though, I just decided to try and calm down.
And as I laid there for I don't know how long, with Air playing on the stereo, it hit me. I came to realize that my heart beating, was just like the universe expanding and contracting (if you believe in the Big Crunch->Big Bang->Big Crunch->Big Bang etc. theory). I also had this vague feeling that the Universe -was- a heart of some sort, in a gigantic other universe or being.
I also remember Air - Le Voyage de Penelope as a giant pillar of a lightbeam behind me (I was facing the wall), with all this bright, sparkling lights surrounding it, dancing around the room, it was great..
Man, now I wanna toke up, and I'm all out :|

Coming to the sudden realization that this life is just a virtual reality game being played by someone in the far, far future. This entire lifetime takes only a few seconds of "real" time in the future. I even remember having false memories from my future-life.
Awesome moment. I feel like a huge stoner thinking about it now, but still.
--
Another time, a friend and I were driving around the huge orange orchard in his backyard at about 3 AM, possibly the most lit either of us had ever been. "Dude," he said as he turned to me, "There's a dragon outside."
Not missing a beat, I stopped the car, gave him a deadly-serious look, and said "We must do battle."
We got out of the car and ran through the orchard, scanning the sky for the dragon that we were sure was there only a second before, and had gone around the side of a hill at the edge of his property.
Suddenly the sprinkler system started to come on, making a hissing and crackling noise in the dry leaves under the trees. "Shit, goblins!" we shouted, turning and hauling ass back to the car and safety.