The Freedom of Silence 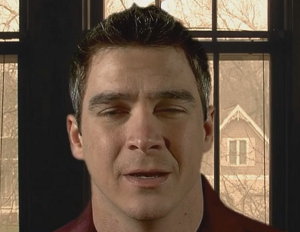 Basically, this movie is the ultimate Christian wet dream: it’s somehow simultaneously both (yet another) 90 minute snuff film about a guy getting beaten to death for our sins for no actual apparent good reason, and a long, creepy Willy Wonka glass space elevator ride straight up god’s asshole through lily-gilded clouds of smugness and deep-seated paranoia and courtesy of a film crew lacking any sense of humor or irony. Also, a really boring romance subplot stapled hastily into the middle of all the government-sanctioned torture and Gibson-hacking, because it turns out padding a movie out to a full hour and a half isn’t easy. At least the romance culminates in a melodramatic attempted suicide in a thunderstorm, wherein most of the dramatic tension involves waiting to see if she'll notice she's pointing the gun well above her actual head.

Speaking of the torture, it might have carried just a tad more gravitas if it wasn’t accompanied with hilarious tirades about the logic of the Bible and administered at the hands of the Not-So-Grand Inquisitor, who sounds like a cartoon impersonation of Al Capone when he’s angry:

Why all the beatings?  As we’re reminded every thirty seconds, over the course of just 20 short years, the Neo Supreme Court and slightly future-y US legislators have somehow managed to roughly erase; white-out; cigar burn; industrial shred; repeatedly pulp, recycle, and vandalize with phrases like “Up Urz Gord” and “I H8 Jesus Lord”; and then ultimately roll up anything even resembling a Constitution and use it to light their godless pagan farts live on CSPAN without so much as a hiccup from the brainwashed American atheist evolutionites. Their MO? Simple: Kill God. Figuratively. Via ridiculously sweeping and cartoonishly evil totalitarian bans on religion, reading, and pretty much free speech of any kind everywhere ever. For some reason, these things are used only against Christians/Christianity, and Christians are the only ones who seem to be even remotely irked by it[2].

We could probably write a novel about the stupid fucking premise of The Freedom of Silence, but there’s plenty to hate in the actual execution too. The backing music never has any lyrics, but it’s so banal that it can only be Christian music, hopefully courtesy of some of our favorite faith-themed recording artists like Nine Inch Nails Through A Cross, Smashing Pumpkins (Because They’re for Witches), Zakk Mylde, In Flames of Sacrament, and of course cult phenomenon Godspeed You! Black Jesus. 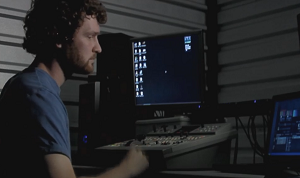 He’s doing the Lord’s cyberwork.Then there are the rich and nuanced subplots, which include the aforementioned romance snoozefest and watching the main guy get progressively more and more acne over the course of the movie (or the makeup artists getting progressively lazier, we’re not exactly sure which). One of the crucial linchpins of the plot’s climax is when our hero proudly announces to the world on TV that he’s sent a copy of the Bible to literally every e-mail address in the world (everyone@earth.net) - we wish we were making this shit up. That’s just the kind of techno-magic you can pull off with the power of an old mixing board thrown out by a high school drama club plugged into your sweet cyber-rig-4-Christ.

In case it isn't clear yet, The Freedom of Silence is not for you, no matter who you are. If you watch movies for the acting, this is the driest well you could ever hope to find, especially since the protagonist sucks all the charisma out of any room with his smug, yet robotic delivery. If you have more than two brain cells to rub together, the premise "Supreme court bans religious books, cites Constitution" probably isn't going to captivate you. And if you're actually looking for a paranoid sermon that teaches you nothing of any value? Just go to church; it will feel quick by comparison, and you get free cookies. Amen.

[2] But who cares, all of those other religions can go fuck themselves because they’re wrong and will burn in hell anyway. That’s not implied, by the way, the main character actually comes out and says it during his big speech. Subtlety is dead in the year 2030, we guess.