Eventually the jungle underbrush death-of-everything march and musical revue is rudely interrupted by a group of refugees fleeing from some murderous jeep-riding guerrillas. The refugees are all dressed suspiciously like they were rounded up from the streets of LA about thirty minutes before the shoot, because they probably were. Leaping to action, our heroes bravely peek out from the bushes until everyone but one woman is already gunned down, before finally saving her with the customary hailstorm of bullets. Their rescuee decides to tag along for the top-secret mission so she can give a sympathetic edge to all the bloodshed, like complaining about how they're not killing people fast enough to save the children, which is a touching sentiment. Of course, she has bigger problems to worry about, like the predator "Omega-1 Unit" playing a deadly game of peek-a-boo:

The mighty Omega-1 Unit is a marvel of modern technology, boasting blurry pixel-vision that's at least a small step up from pinata-vision. It also likes to constantly narrate every action it takes in a totally incoherent electronic gibbering voice which sounds like robo-George Costanza overanalyzing a telephone conversation for 12 hours at 100x speed. Anyone who manages to survive its rampage is going to have severe PTSD and hear GREASY RECEIPT BOOT COFFEE REBEEPLDEE or whatever it says in their nightmares for the rest of their lives. Us, for example, we'll have that and those. Oh, and by the way, it's not just any old robot, it's a cyborg rebuilt from the remains of the unit's old buddy, whose tragic near-death they occasionally have 'Nam flashbacks to. Spoiler alert.

Who could create such a horrible monstrosity? That would be Mascher, the outsider who gets to tag along with the close-knit commando unit - Mascher is responsible for creating the Omega-1, and he must have been pretty disappointed when Daft Punk turned his creation down as a third member, which is probably why he programmed it to KILL mode and dumped it in Costa Rica. So, in other words, he's here solely to watch his glorious murder machine in action up close and personal, and specifically to see if it can match up to a decorated military unit (at some point the green berets must've figured it out and ditched him so he just has to make do with Team Bigass). All of which really begs the question, why in the fuck is he here again? 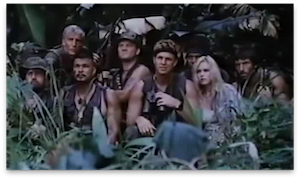 'Hey, are we all in the shot? Mom will totally flip out if this Christmas card isn't perfect!'We don't really need to bother explaining how the movie ends (everyone but the star and random refugee girl dies horribly), although the defeat of the robo-enemy does involve a glass of water. But the real fun begins with the credits, which are so bizarre that we can only imagine the producers couldn't make it all the way through their own film to check them. Whoever made them in the first place must have panicked when they realized the singular woman character didn't have a name in the script, because she gets credited simply as "Virgin". Then budget Chuck Norris gets credited as "Sonny Peel", but whoops, he's really Guarino and they switched the goddamn names. This would already be pretty ridiculous, but it's even worse once you remember that Chaz Norris actually has an incredibly stupid monologue where he bemoans the death of Peel:

"He killed Peel. Peel was my friend. Now I'm gonna get to you, you bastard!"

And with that, we're out of here. See you all next week and/or in hell!