Running down to the beach, they obviously have decided to leave the island, but their boat has mysteriously vanished! How shocking and awful! They try calling the big head honcho military guys but quickly discover that they have been set up! Oh no! Fearing for their lives, they catch sight of the old homeless bum who lives on the island and follow him to his secret underground lair where they see his vast collection of shit that he has been slowly gathering to himself for the past 40 to 50 years or so. They sit in his hole with him and watch as he fondles several corpses. 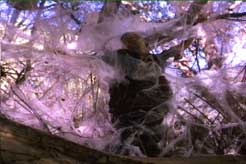 Banta, meanwhile, is wandering about aimlessly for several of the people who got separated from the main group in the shock that they had been set up. She runs everywhere, screaming shrilly for them, even though they all have walkie-talkies. Suddenly she walks into a giant spider web and starts to scream as she wraps it around herself in a lame effort to make it look as though it was attacking her. The rest of the "Marines" hear her scream and thus begins the great shout of:

Which lasts for at least a half an hour. The soldiers begin to react in the way that any well-trained military person would, which is to say that they all grab their guns and begin shooting randomly into the darkness and mysterious fog which has just appeared out of nowhere.

Fast forward to morning-time. Banta is still stuck in the spider's web and the aliens are playing with her. The alien reveals that he has some sort of dumb ability to sort of turn invisible but not really and he runs around from place to place for awhile in blurry blob-form. Meanwhile, the military people are hanging out in Homeless Joe's basement still and watch some very interesting "old home movies" that the guy has. You can tell that they are old because of the vertical lines again and the fact that they are black and white. The movies consist mainly of some really shitty-looking toy spaceship models flying around on strings and people dissecting a live alien while the other watches from a cage. They also pull out what appears to be a baby alien from someplace and the alien in a cage escapes by bending the bars and kills everyone in the room by barfing up acidic goo all over the place. 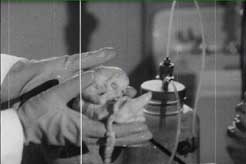 The military people find Banta at last from a distance in the forest and see that there is an alien next to her who is pulling bloody chunks of something out of her ear. They decide to shoot her, one guy saying, "That's what I'd want!" Poor, poor Banta. At least from this point on we don't have to listen to people running around shouting her hideous name. The military goons run from the alien to the safety of the bum's hole (har har) only to have helicopters sent by the evil military begin to drop very tiny, very ineffectual bombs on the island. The alien suddenly appears in their hole with them and they escape to above-ground, but not before they figure out together that the alien craft is solar-powered and that it had just stopped on Earth to refuel before being nabbed by the meanie military people. 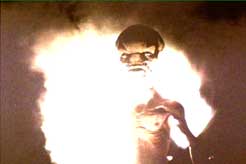 The military people decide to take their chances and begin building a raft out of barrels, rope, and wood, but before they can escape, the evil BLACK OPS military people land on the island! They take the women to the concrete block-cave and one of the aliens molests her. She is somehow able to escape by running away and the military guys all get killed by the aliens. I guess they didn't know that the large, mysterious concrete block that stood in the center of Alien Island, the place they had been sent to kill other marines who had stumbled onto some aliens, had aliens in it, or whatever. The woman for some reason just up and dies, and the one lone survivor, Lt. Kern, swims out to the garbage barge that had brought the evil military goons to the island. He then proceeds to have a very lame showdown with Big Head Honcho Military Guy of wet floor fame and that guy gets pushed off of the side of the boat and shot, so presumably he's dead.

At this point there is a very pointless cut to a picture of the alien glowing or on fire or something for no real reason and there is another scene where the alien's trash-ball spaceship rockets back into space from whence it came. Why the alien would have spent fifty years on this dumb island with a homeless man and some rabbits is beyond me but I am happy to say that it picked its saggy ass up and left. Thank goodness. It is assumed that Lt. Kern and apparently the homeless man as well have escaped from Rabbit Alien Island of Death on the oil rig or whatever. The movie should really have ended a long time ago at this point, but dammit, it has one last punch to pack like a rabid pit bull that won't let go of your leg even after it's dead but that instead keeps punching you in the leg. Wait, that's not right. 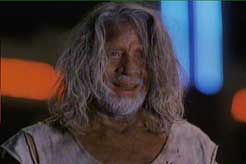 There is a cut to the present and we are again back in the hotel room with the reporter and the crazy man who we now recognize to be Lt. Kern in all of his incompetent glory. The reporter informs the Leiutenant that she will run the story if she can convince her editor that the story is real. Good luck, lady! Cut away again to some city street where the homeless man from the island is pushing a shopping cart full of bum-garbage down the sidewalk. He stops to watch television in front of a store window and hears something about how some military guy will be standing trial for disobeying orders and a whole bunch of other cover-up frame-job shit that is very predictable and pretty annoying. At this point the homeless man begins to laugh and shout, "They're lying! THEY'RE LYING!!! THEY'RE LYING!!!!" over and over again, and he capers off down the street, leaving his shopping cart behind him. AND THAT'S THE END, THANK FUCK, AT LAST.

WHAT THE HELL? I have no idea what this last scene may mean and I probably don't want to know, but I do know that this was one of the worst movies that I have ever seen. It was absolutely wretched in every way that I can imagine, from the cliche alien conspiracy cover-up bullshit that the characters were consistently too stupid to figure out, even when it was right in front of them, to the horribly implausible military garbage that they couldn't even get right. I'm not sure who was in charge of the props and set, either, but that person should be shot without delay for the bunnies on the rooftops alone, not to mention the hideously grotesque old-man aliens with saggy skin, acidic vomit, and very non-scary everything else. This movie should be a required prerequisite for everyone who has ever thought about making their own alien movie so that they can clearly study what not to do.