Pimps Up, Hoes Down 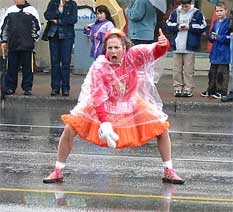 Women are superior organisms to men.Men are used to dying much younger than the fairer sex. Go into a nursing home some time and go to the mummy section and count the number of men versus the number of women. The crypt-walkers are almost always female, and that's because for as long as I can remember, and maybe even longer, women have had greater longevity than men. Part of this obviously has to do with the fact that women lead lives of leisure. Oh to be a woman! Get up around noon and eat chocolates on the sofa while you watch some repulsive talk show featuring transvestites and possibly midget transvestites. Spend all day lounging by the pool while tanned poolboys rub scented oils into your toned body. The life of a woman is pure hedonism.

Men on the other hand are slowly ground into dust by the crazy workaday world. Yeah, I know guys, we give our life blood for them so they can just sit around doing nothing. All that's about to change though, according to a new study conducted by some crazy research group in Britain.

Peter Ayton, Mintel's chief statistician, said: "It is largely due to medical practice and the advances in the cardiac area, which has traditionally killed off more men than women. Women are still living longer and longer though men are catching up with them. It may well be that in 50 or 100 years' time there is no difference between the two, though naturally women tend to live longer." 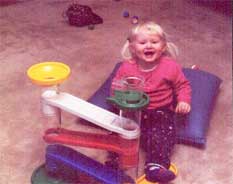 "What a cute little kid" is what you're thinking. Would you be surprised if I told you this is a 98 year old great-grandmother? I sure was when I told me that.Guys, our stock is rising! Pretty soon we'll be in a dead heat with the ladies, which reminds me of the Schwarzenegger/Belushi vehicle "Red Heat", which is totally awesome. This got me to thinking about ways I can pad this article with a list, and also ways that we might be able to beat women in the endless race to immortality. The most obvious way would be to extend our lifespan, but I don't think medical science is going to allow things to get one sided enough to give us a definite edge. What we need to do is encourage women to "complete their life cycle" at an earlier age.

There are ten female traits that we can exploit to these ends.

Much as I was not saying earlier, the easiest way to defeat women in this competition of the longest-lived sexes is through battle rap. I have attempted to bring about the untimely demise of a number of women on the forums through the judicious application of the following "insane rhymes" as "busted" by Mexican Wrestler El Pinto Grande during a brief foray into rap music.

M C E P G IN THE HOUSE!!!! Bringing you that funky fresh Barrio style straight out of the T to the J, coming at ya like a flyin' lariat!

Back up that ish cuz my joints rock solid,
gonna knock off the wigs in the muthafuckin' par-li-
Mental is my flava and pinto is my name,
Maxin and flossin is my numbah one game.

I blow the lid off shit like Jeff-rey Wigand,
Rollin thru ya hood with my dynamite mic and,
rhymes that come straight from the heart,
sayin' like DL this thing just came apart.

Nigga please sit on that hand before you attackin,
shit fall asleep n it feel like someone else jackin,
Right hand is yo wife, left hand is yo mistress,
Favorite outfit is Jergins but that's none o' my bidness.

I've got rabbits for hats and waffles for eyes,
and Lancelot Link shall be my demise.
Flowin free like a turnip in the red hot sun,
got a hotdog in my pocket and my keys on a bun,
switch it up crazy like the Hammerli brothers,
delivering coat-hangers to black eyed mothers,
my rhymes comin' like Beck only ten time scarier,
Sasquatch, shit, newborn baby is Harrier-
-planes were used in the Falkland Islands,
South Africa's largest export is diamonds,
I gotta bow tie like Malcolm X,
Choose love hotel and you'll get no sex-
-in Hentai games that were made for a dolphin,
Harrasser from Renegade was a traitor and a Bauphrin,
No mustard mitch said mother to the New York Jets,
but forget that shit New York's finest is the Mets.

Wait, that kills both men and women. DAMN IT ALL TO HELL!!!!