Bin Laden Determined to Strike with the Mentally Disabled

If you don't believe me, if you think global terror is still the threat it once was, let's take a tour of the past six years or so of terror attacks on the United States and its allies. I think it might change your mind. 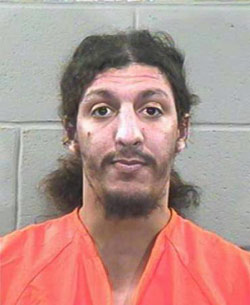 Alright, man, the bombs are all set up. I'm just gonna duck over to the aromatherapy tent and eat my granola.9/11/2001 - This was the big one. This is like the terror attack equivalent of that mythical meteor scientists always talk about wiping out the dinosaurs. It killed over 3,000 civilians and only 19 terrorists. That looks great on paper, but these guys were the terrorist A-team pulling the equivalent of the Picard maneuver. Those 19 guys are gone now, along with all of their experience and wisdom . The civilian loss was tragic, but those guys were civilians. America has an almost unlimited supply of civilians. Even if you somehow manage to blow up all of our civilians we can get plenty more of them that work even harder from Mexico.

12/22/2001 - The shoe bomber, Richard Reid, attempted to blow up an American Airlines flight flying from Paris. He tried to light a bomb in his shoe with matches and failed. Possibly the least terrifying terrorist ever, he looked like a roadie for Phish. The most disappointing second act since the time David Cross opened for Gallagher Too.

3/11/2004 - 191 people were killed by bombs planted in four different Spanish train stations. Probably the best terrorist attack of all because it did not rely on any suicide bombing. Unfortunately, the Spanish police figured out where the terrorists were hiding and surrounded their apartment. As the police began their raid, the terrorists blew themselves up along with one unlucky cop. That effectively negated all of the good work.

7/7/2005 - After a handful of unsuccessful attacks the terrorists began to run themselves out of steam. This attack on London involved four suicide bombers blowing up on three trains and a bus, killing 52. Some folks in England consider this "their 9/11", which is pretty sad considering they had the IRA bombing them for decades. While it was not as dramatic as 9/11, plenty of video footage was generated thanks to London's super-creepy CCTV system that tracked the bombers over the city.

8/6/2006 - An Afghani Muslim named Omeed Popal drove around the San Francisco area in his SUV striking pedestrians. He killed one man and injured several others. He initially claimed to be a terrorist, but later claimed to be crazy at the urging of his lawyer. Three months later, Popal's rampage was made feeble by the unintentional rampage of George Weller, age 89. Weller killed ten people with his car at a crowded market in Los Angeles. Terrorists were becoming dangerously close to blending in with regular traffic accidents.

5/8/2007 - Possibly the lamest terror attack attempted since Richard Reid lit a match over the Atlantic. A New Jersey video store clerk phoned a tip in to the FBI that a man had asked him to dub a DVD of a VHS tape that showed several men shooting weapons and calling for a Jihad. The men turned out to be six foreign-born Muslim immigrants. This group of extremely clever men was intent on attacking Fort Dix and killing as many soldiers as possible. What a great idea, attack a base full of the people trained to shoot terrorists! This wins the award for the stupidest terror target ever, narrowly beating out the three guys from Chechnya that tried to blow up a lake. 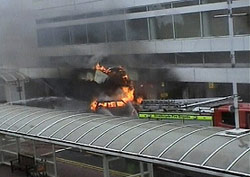 This is actually a video clip of the bomb exploding at Glasgow Airport.6/29/2007 - Nightclub bouncers spotted a Mercedes driving erratically in London's Haymarket neighborhood. It crashed into a dumpster and patrons spotted smoke. The car turned out to be full of propane. A second car was discovered in a parking garage. There are so many things wrong with this terror plot it's hard to know where to begin. On 9/11 terrorists were able to fly huge jet aircraft into a building, less than six years later they are apparently incapable of driving around a dumpster.

7/1/2007 - In an attack similar to the one in London only days earlier, three terrorists attempted to drive a car full of gas into the main terminal of Glasgow Airport. The car hit the terminal, slightly injuring someone inside. The car was set on fire and two of the terrorists doused themselves in kerosene. One terrorist apparently was not interested in burning himself alive. One terrorist died and one was critically injured. This attack is notable because it managed to be even dumber than the attack in London.

I did not mention a number of completely failed terror attacks being "plotted" by inept morons. Some of these attacks border on the absurd and others may not have even been serious attempts at terrorism. At least in the United States, civilians are arrested fairly frequently and declared to be terrorist masterminds plotting to detonate dirty bombs in the middle of nursery schools. These erstwhile Bin Ladens are then convicted, exonerated, locked away in some weird judicial purgatory, expelled from the country, or simply disappeared into a creepy CIA prison in Turkmenistan.

It would appear that despite our best efforts to lose the vague War on Terror by invading random countries, we are actually well on our way to winning. Not because we're smarter or better at catching the terrorists. Not because of our heroic troops, heroic though they are. We're winning the same way mankind defeated the Martians in War of the Worlds. We're winning because the other guys are fucking retarded.