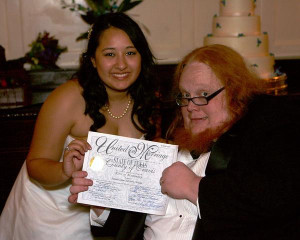 I live in Arkansas so all the weddings I've been to were for friends between the ages of 23 and 19. Those are always depressing. The Baptist receptions are the worse though, since they believe dancing and music are sins. Add to the fact that at least one of the couple is under 21 there is no bar and they generally can't really afford a wedding anyway, so everyone sits around eating triscuits.

My wife and I experienced a few fun moments on our wedding day. Our wedding was in a scenic field in a state park. Historic covered bridge near by, which was nice. The dumpster the park moved to the site for the wedding was not. Half full from summer BBQ's of days gone by in the August heat. That was fun. I don't know how the colony of psychotic raccoons that had nested in it could stand the smell.

Our friends and my mother were the only people who looked like they were attending a wedding. Top hats and fine dresses the lot of them. My in laws are fine people, but jean shorts and faded baseball caps for your only daughters wedding is a bit much. The worst part is they are not the redneck sorts really. Just... oblivious. Though in a nod to tradition her father had a humorous apron with a tuxedo printed on it.

The officiant was our attorney, arrived almost an hour late for the ceremony. The brides parents refused to stop fussing with the food long enough to walk 75feet away for the ceremony. The wedding cake never arrived, though I still had to pay for it (the caterer was a cousin of my employer, pay up for no cake or get fired, it was donated some time later to an old folks home by the caterer, isn't that nice).

One of her great aunts told her entire family minus parents that we were having a Satanic ceremony complete with ritual sacrifice, so that cut attendance down on her side (they are all Catholic).

The wedding photographer was a friend of her dad's from work who does wedding photos on the side. Allegedly. He couldn't identify what sort of DSLR he had, and could not frame a shot if his life depended on it. All of our wedding pictures are of my ass and the side of my wife's face or feet.

There were no less than three sex offenders there between our families, none of which were invited (by us at least). Ah, the joys of family inclusiveness.

The wife and I were pretty sauced by days end (no hard liquor was allowed in the park but our friends gave us a bag with about $100 worth of good booze as a gift), and are blissfully married still 3 years later.

Man, I will never forget the wedding where the groom walked in on the best man quite literally fucking his bride to be in the dress.

It ended with him bible in one hand finger outstretched to the chapel door commanding the woman to beg god's forgiveness and never wear the white dress again.

At a friend's redneck Baptist wedding, the minister gave an uncomfortably long speech about how this young couple's union was a strong hold against the evil liberals and gays who wanted to get married. And sodomy was evil. After that was over, the groom's side was just about ready to clap with agreement and probably would have if there hadn't been the vows getting in the way.

All of us on the bride's side looked at each other in confusion. I whispered to a friend, "Um, is it normal for the pastor to give a sermon about homosexuality on a Saturday morning wedding?" Apparently, the answer is no.

The guy just couldn't wait another day. He just really needed to give that sermon right then and there.