Fair warning: More than all other superheroes, I really dislike Spider-Man. While Superman stands for unflinching optimism and Batman is his counterpoint pessimist, Spider-Man is the porn-hero for socially awkward weirdoes engorged with inarticulate nerd-rage and shitty attitudes towards women. I remember very little about Spider-Man, except that it was yet another fucking origin story in a young century that's obsessed with origin stories (probably because it's a bankable formula that doesn't require screenwriters to think too hard), but Spider-Man 2, while not exactly terrible in its cumulative effect, ably demonstrates everything that's troubling about this particular mythos. I mean, at least it's short, barely eclipsing the two-hour mark at the beginning of a century that saw the superhero film close in on three, and the scenes in which Doc Ock goes apeshit are suitably amusing. Whenever anything else is happening, I check out.

Does whatever an octopus can.


I feel like "tone deaf" is a term overused by critics - maybe because I'm in the target audience for movies that attempt to cram too much into one film - but it certainly applies to Spider-Man 2, which swerves wildly between slapstick humor, horror, action and drama. Sure, director Sam Raimi built his career on blending the first two tones (budgetary flexibility aside, there's a reason Evil Dead 2 is better-regarded than its predecessor), but piling all that shit into one movie while explicitly referencing his earlier films is too much for Raimi to handle - tellingly, composer Danny Elfman, no stranger to scoring schizo films, works overtime to deliver music that reinforce the moods Raimi's going for while still sounding relatively cohesive. He fails, but it's not his fault. Really, you'd need someone more like Wesley Willis to stabilize the film. Nothing that's happening onscreen is particularly convincing, no thanks to an over-reliance on CGI that seems rushed, as if it were generated sometime between "how much money can we save if we don't blend this properly?" and "who gives a shit about physics?"

Spider-Man exists in a vibrant, colorful New York City that evokes the Metropolis of DC Comics. Superman works at the Daily Planet. Spider-Man works at the Daily Bugle. Superman is a reporter. Spider-Man is a freelance photographer. Superman first appeared in 1938, when the U.S. economy was beginning to rebound from the Great Depression. Spider-Man appeared in 1962, a year after John F. Kennedy defeated Richard Nixon, but a few years before the Vietnam War led to America's most prominent youth rebellion. I'm pointing this out not to school you on comics - if you're reading this, you probably know way more about this shit than I do - but because these two franchises share similar themes despite the essential contrast between their heroes: Clark Kent is an adult professional with a wide variety of superpowers while Peter Parker is a sad-sack teenager/budding artist with fewer tricks up his sleeve and a comic book collection. He's a younger, more complex iteration of the superhero who started it all. 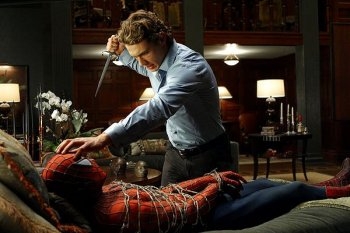 Immediately after, Franco accidentally stabs his own hand.Spider-Man 2 preserves that sense of good-natured altruism - Spider-Man exclaims "oh boy!" at least twice and is quick to, y'know, rush into a burning building to rescue a child - but it also positions itself against virtually everything it depicts. This is a film that's anti-science, anti-journalism, anti-police, anti-James Franco, and, strangely, simultaneously anti-capitalism (witness how the film treats its only entrepeneur) and anti-socialism (now witness how quickly and comically Doc Oc pushes aside all those train passengers who stand in solidarity with Spider-Man). This gulf between (for lack of a better term) aesthetic ideology and narrative ideology repeats itself in the racial makeup of Spider-Man 2's New York City, which is presented as incredibly diverse even if Spider-Man exists in an unpierced bubble of whiteness and characters of other ethnicities exist only to sing the Spider-Man theme song, shout the occasional "go get 'em, Spidey!" or bitch about his pizza-delivery speed. Really, this is a film that fully supports nothing but its own grave platitude: With great power comes great responsibility. Yeah, big fuckin' news there. I keep hoping Peter will respond, "Golly gee shucks, I never thought about it that way!" No dice. Instead, he and Uncle Ben simply stare at each other with the intensity of freshman philosophy majors who just bonged their way into an essential, heretofore unrevealed truth.

Another contrast: As backwards as Superman's gender politics were, at least Lois Lane was a woman with a job that required her to think. As a billboard model, Mary Jane Watson is a professional object, which is appropriate. Even when Mary Jane's off the clock, she's a thing onto which Peter Parker - and the whole legion of men for whom he Mary Sues - can project both fantasies and insecurities. This is a character who, upon her introduction in 1966, turned around, faced the reader and said, "Face it, tiger, you just hit the jackpot." She's a redhead, and you love redheads. She's a glamorous model, yes, but she's also a girl-next-door type with an androgynous nickname. She just flew in from Paris and, boy, she can't wait for a beer, a hot dog and a good silent missionary fuck - or an upside-down kiss, since this is a PG-13 universe in which sex does not exist. Hell, she doesn't even care if, during your kissy time, you have to shield your true identity in what's, essentially, a full-body prophylactic because sex is scary and gross. What's this? She chose a charming, genuinely kind and attentive astronaut over you, the photographer with a dream, a boner, a pathological failure to support her sole artistic endeavor and the goddamned right to the girl of your dreams? Not so fast, buddy. Not only did she hinge her decision to leave him at the altar on whether or not she could recreate your lone sexual (but not too sexual because that would be intimidating) experience by using him as a you-by-proxy, she is standing in your doorway wearing her wedding dress (you know, the most prominent relic of her aborted ceremonial subjugation to your sexual rival) to tell you she was always "standing in your doorway" (nevermind the fact that you've completely neglected her for two movies now and you're gonna smack her in the sequel) in a brief speech punctuated by one vaguely feminist (but not too feminist because that would be intimidating) sentiment and a scorcher of a kiss.