Actively sitting down and watching the first Sam Raimi-directed Spider-Man film is almost like visiting a museum, or opening up your high-school yearbook. As difficult as it is to believe, kids, there was once a time when a big-budget superhero film was something of a rarity, not the tri-annual tradition that it is now. Today people attend superhero films more often than they see the dentist, but in 2002, there weren't any standards or expectations. Sure, there had been the Superman and Batman films before then, but otherwise Raimi was pushing forward on the trail pioneered by the first X-Men film. It was a bizarre time in the genre, when you could make a movie that was actually mediocre at best and it would still receive exorbitant amounts of money and praise, simply because it contained characters from a popular comic book. Wait, that's still true today.

Even so, Spider-Man when viewed today does not hold up well, and once you get past the test of "Do the events on the screen roughly match the ones in comic books written 40 years ago?", you are still left with a deeply flawed film that scrapes by on the occasional flashes of genius. 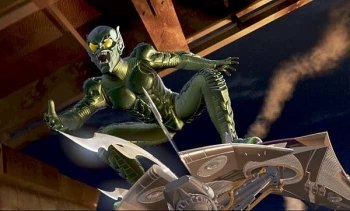 He does whatever a green goblin can.

I'm not going to bother the plot recap here. You know the plot of Spider-Man. I genuinely can't imagine what you would be doing reading this if you didn't. At this point in comic-book movie history, you shouldn't expect much deviation from the source material, but the issue here is that there is just so much to draw from and so many flavors that the film ends up tonally confused. In an attempt to capitalize on the darker, angrier X-Men franchise, the film opens with this ridiculous noir monologue, as Tobey MacGuire mopes: "Who am I? Are you sure you wanna know? My story is not a happy one", which is extra-inane because anyone in the audience knows that being Spider-Man is pretty awesome. (With the exception of literally everyone you get close to eventually being murdered, of course.) This same film, which is bookended by weepy-eyed soliloquies, also contains Willem Dafoe in what is essentially a Power Rangers bad-guy mask, literally shaking his fist and screaming "We'll meet again, Spider-Man!", after he breaks up a Macy Gray concert. That's right. This film was made when Macy Gray was something people cared about.

The basic issue here is that Spider-Man, being among the top-tier most universally known comic book characters, has dozens of different versions and takes on the same basic story, and the problem with the first film is that Raimi tries to combine the tragic figure Spider-Man which was popular in the books at the time, with the beautiful insanity that is Newspaper Spider-Man. If you've never read the daily Spider-Man strips that appear in your local newspaper, they are evidence that Stan Lee might be the world's funniest human being, or slowly losing his mind. In these strips, Spidey recently had to fight J. Jonah Jameson in an Iron Man suit (with a mustache, still), got his ass handed to him by a literal clown villain named Clown-9 whose power was that he is a clown, and frequently is knocked out by randomly falling bricks, despite having spider-sense. Oh, and Barack Obama once made an executive order saying Spider-Man was allowed to board an international flight without removing his mask. You have no idea how much I would love to see a movie about Peter Parker absolutely sucking at being Spider-Man, and it feels like Raimi wanted this too, in parts, but also had to force in an angry angle so that it could appeal to the trend of "emo", which was also a thing that happened in the early 2000s.

What we do have is Peter kinda sucking at being a human being, continuously making it difficult to root for him. Most commonly I hear people who love Spider-Man argue that the reason for his appeal is that he's "just a regular guy, a superhero I can relate to." If this is true for Maguire's Parker, you may wish to re-evaluate your life choices, because when the film was going for "shy and awkward", they wound up overshooting and hitting "creepy lonely weirdo." In one particularly cringe-worthy scene, Peter watches Mary Jane (Kirsten Dunst) walk out of her house crying. Instead of having a moment where he talks to her like a person and therefore humanizes them both, he stares at her from fifty yards away and has an imaginary conversation out loud to himself. When Mary Jane finally does talk to him and asks a simple question, he just stares, mouth literally agape. All this, and we're supposed to think Harry Osborn (James Franco) is a jerk when he finally asks MJ out? Speaking of, Franco's performance is pretty terrible in this film, particularly the bored, lackadaisical way he eventually promises to take revenge on Spider-Man. "I will avenge my father's murder. Spider-Man must die... or whatever. You hungry?" 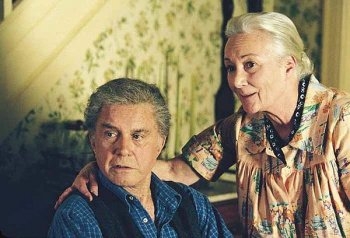 I don't know how to tell this, uncle Ben, but...Like I mentioned earlier, however, there are enough moments of brilliance in this film to keep it afloat. The scene where Peter discovers his powers and is trying desperately to determine how to make his web-shooters work is still hilarious. JK Simmons' performance as J. Jonah Jameson is one of the most spot-on perfect comic book movie performances ever. Any scene with Dafoe in it where he is not wearing a mask is scenery-chewing at its best, especially when he is talking to the mask itself.

My favorite aspect of the film upon re-watch, however, is how much of the film seems to revolve around a class struggle between the Osborns and the Parkers/Watsons, which is particularly interesting for a film taking place at the beginning of the global recession. Remember that the reason Norman Osborn becomes the Goblin in the first place is that he is in jeopardy of losing his job. The first time we meet Uncle Ben, he's checking the want ads, taking his recent layoff in stride. The best interaction between Peter and MJ is when she is coming out of the diner, trying to hide her waitress uniform under her jacket, because she doesn't want Harry to know she's working. And of course, cheesy as it is, I personally love the bit where a group of New Yorkers gather on a bridge to throw bricks and pipes at the Green Goblin. This is where the idea of Spider-Man as a working-class hero regular guy comes into play, and its an interesting concept I wish had gotten more play. I also wish the first lines of the movie weren't literally "I am not a regular guy", but we've covered that.

Spider-Man is a time capsule of a film that has not aged well. Particularly embarrassing is the incredibly ugly and silly-looking first fight scene between Spider-Man and the Goblin in Times Square. It's poorly shot, filled with silly-looking CGI, and contains absolutely no tension at all. Of course, when you line that up against The Avengers' NYC fight scene, you will realize that we have learned basically nothing. We've swapped out our Damsels In Distress for Women In Refrigerators, but if anything that feels like a step backwards. Still, there's enough charm to Raimi's first film that I can't completely condemn it, and in my mind it basically exists so that we could get Spider-Man 2. That one contains 100% less Chad Kroeger.