I'd like to start this piece on Spider-Man 3 by telling you about the worst film Sam Raimi ever made. No, despite what the rest of the internet might tell you, it's not Spider-Man 3. I know, shock of shocks. The worst film Sam Raimi ever made was a little caper known as Crimewave. After finding success with The Evil Dead, Raimi & Co. received a few million dollars to produce their next film. What they wound up making was a ramshackle, gruesome and painfully unfunny parody of Hitchcockian thrillers. What makes Crimewave uniquely terrible is that, for such a broadly silly comedy, it is loaded with needlessly elaborate action sequences. In fact, it's so crammed with setpieces that some were storyboarded and then thrown away. One such setpiece involved the film's hero, Vic, duking it out with one of the villains in a subway tunnel, trains constantly whizzing past them. This scene should sound familiar, because twenty years later, Raimi pulled it out of the garbage and stuck it right in the middle of Spider-Man 3. 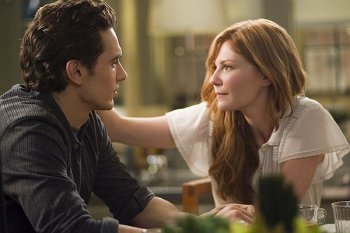 How old is she, Franco?Now, I'm going to be upfront about this, because you'll figure it out soon anyway: I have a soft spot in my heart for Spider-Man 3. Always have. I realize that probably makes me the landlord of Lunatic Mansion, but hear me out. It's an extremely funny film, often intentionally so. Few superhero films have such an intense case of self-loathing as this third Spider-Man. It's a film very much in conflict with itself, and that understandably rubs fans the wrong way. There are three separate stories vying for attention, and they never quite gel the way they should. Even two mediocre Spider-Man films later, though, people still scramble and claw out of the woodwork to declare themselves the Number One Super-Hater Deluxe of Spider-Man 3. People take this shit seriously.

And I can see why they feel this way. Sam Raimi took his franchise, one that people generally enjoyed, and turned into a ridiculous farce just to satiate his own sick, twisted, adolescent urges. Character deaths are retconned (like this never happens in comic books), memories get conveniently wiped (this too), and our hero finds out that maybe he's not such a cool guy after all (okay Joe, we get it). Spider-Man 3 is a film whose primary objective is to burn the Spider-Man franchise to the ground, and more often than not, it succeeds in its mission.

Watching the series again, it's pretty clear that everyone involved were getting tired of all these shenanigans by the time part three rolled around. As the story begins, we find Peter Parker watching news footage of Spider-Man on a giant video screen in Times Square. When the kids standing around him start to walk away, he asks if they want to watch it again in a couple minutes. "Nah," they reply. "That's okay." That's okay, Spider-Man. We've seen all this before. Twice, actually. Kids are getting tired of Spider-Man, and we soon find that Peter Parker is getting tired of it too.

For all of the things that Peter tells us are going right with his life in his opening monologue -- getting to school on time, being at the top of his class, having the girl of his dreams, being Spider-Man -- Peter's life is actually kind of miserable. He's still picked on for being a nerd (in his college advanced physics class, of all places). He lives in a crappy apartment run by an Eastern European stereotype. He has been making peanuts working freelance at the Daily Bugle for God knows how long and, oh yeah, his best friend wants to murder him for being Spider-Man.

Even after all the things Spider-Man has done for New York City, God still gets a kick out of taking a dump on Peter Parker. That's the Sam Raimi worldview in action. He has never met a protagonist he didn't love to hate, and nowhere is that more apparent than in Spider-Man 3. From his early days dumping gallons of fake blood down Bruce Campbell's throat, to his most recent effort shoving James Franco headfirst into a totalitarian greenscreen hellscape, Raimi is one of modern Hollywood's most ruthless pranksters. So when Sony gave him $250 million and told him he could do whatever he wanted (as long as whatever he wanted was Venom), it's easy to understand the urge to turn yet another Spider-Man film into an out-and-out farce. 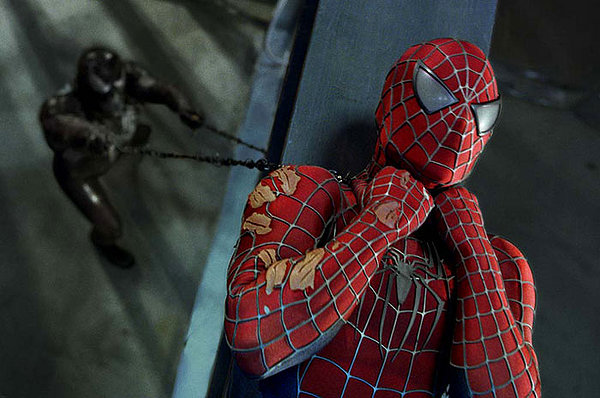 Does whatever... I don't even know what this is.


Marvel head honcho Avi Arad mandated that the fans wanted Venom, so Sam and co-writers Ivan Raimi and Alvin Sargent had to rework every single part of their Spider-Man vs. Sandman movie to make Venom fit into the plot. This meant retconning Sandman as Uncle Ben's real murderer, so that Spidey would actually find use of the Venom symbiote. This meant giving Harry Osborn a temporary case of euphoric amnesia, because the blacksuit is already making everyone in this movie miserable as hell. This also meant writing Eddie Brock and Gwen Stacy into the story, because with the symbiote in play, Spider-Man 3 has to be a film about doppelgangers, the duality of light and dark, all that crap.

This movie was becoming dark as shit, so Raimi responded by making Spider-Man dance. Establishing that the symbiote goo enhances the aggression of whoever wears it, the film then goes out of its way to show just how aggressive Peter Parker is. Specifically, he isn't. There is no such thing as Dark Peter Parker. Even at its most assertive, the black suit can't stop him from being an utter goofball in public. Whether he's walking down the street and doing sexy finger-pointing at ladies, or annoying Mary Jane in everyone's favorite nightclub scene, this is still Chess Club/Science Whiz/Freelance Photographer Peter Parker we're talking about here. He's the nicest guy on the planet. In fact, he's such a "Nice Guy" that his idea of getting back at his ex-girlfriend is pulling a Ron Burgundy jazz routine on her. Then he slaps her while she's at work. Whoops.

People hate this scene with a burning passion, though. Comic book fans riot in the streets, tearing down traffic lights and looting sporting goods stores when people talk about Spider-Jazz. But they don't hate it because it crescendos with a display of domestic violence, they hate it because it's silly. Because up to this point, the Spider-Man films have never been silly. I realize this comes across as me being a bit of an apologist for the film, and maybe I am. For thirty years, Sam Raimi has been the conductor on a very particular crazy train of comic horrors, and Spider-Man 3 is no different. You're either onboard with its winking contempt for itself, or you're not.