The Odd Life of Timothy Green

EXPECTATIONS: After relentlessly promoting this film for what seemed like years, Disney unceremoniously dumped The Odd Life of Timothy Green into theaters a month ago. I guess they knew everyone was still too deep in the throes of Bat-mania to even notice. If you ask me, Odd Life might have garnered at least some attention if Disney had billed it as "Swamp Thing: The Early Years." Then again, I was never very good at advertising.

REALITY: I can respect a film for wanting to illustrate the joys of parenthood, I can even appreciate a film dealing with the confusing realities of adolescence. It's frustrating, then, to find a film that attempts to do both of those things without saying anything about either of them. Much like the titular character himself, The Odd Life of Timothy Green is a complete non-entity. It exists at the intersection of schmaltz and whimsy, and seems to think that charm alone is enough to carry a film. 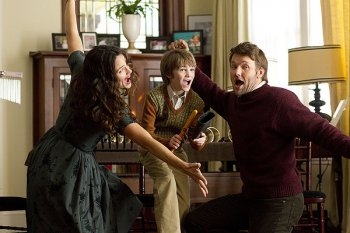 Tada! It's a freaky, unnatural abomination of a child!Jim (Joel Edgerton) and Cindy Green (Jennifer Garner) are unable to conceive, but they want a child so much it hurts. During a drunken pity party, Jim and Cindy list all the traits they'd want in a perfect child. He has to be honest to a fault, cool but not too cool, as funny as M. Emmett Walsh, and generally awesome. They bury the notes for their perfect child in their garden and, after a sudden rainstorm, wake to discover a fully formed ten-year-old wandering through their house.

Timothy (CJ Adams) did indeed sprout from their garden, and he has the leaves growing from his ankles to prove it. With a sudden child in tow, Jim and Cindy enter the volatile world of judgmental parents just in time for the new school year. As Timothy connects with a fellow oddball (Odeya Rush), Jim's boss (Ron Livingston), Cindy's sister (Rosemarie DeWitt) and the entire town all have a thing or two to say about Timothy. Maybe they'll all learn something from him if the script declares them bad enough people.

The structure of this film, and the way it dispenses information, is kind of maddening for such a simple story. The entire plot is framed around Jim and Cindy explaining to a social worker how Timothy entered and then exited their lives, so right away we know we're in for a real tearjerker. Slowly throughout the course of the film, Timothy loses his leaves, which only makes sense because it's autumn and he's a deciduous plant baby. His time with Jim and Cindy was always meant to be fleeting, but they never put this together, probably because they're too wrapped up in the excitement of suddenly being parents to understand how their magic kid works. All of this can be chalked up as the visible mechanics of lazy screenwriting at work.

That's their fatal flaw as parents: They're too in love with the idea of having a kid to actually enjoy having their kid. In fact, for all its schmaltzy sweetness, Odd Life takes an unexpectedly cynical tone when it comes to parenting. Jim and Cindy are cool because their whole mission in life is to be Cool Dad and Cool Mom, but every biological parent in this film is a disgusting excuse for a human being. Jim's father (David Morse), for example, begrudgingly shows up to family events, but stomps out the moment someone (usually Jim) disappoints him. Cindy's sister Brenda meticulously structures her kids' lives with activities and extracurriculars, and then openly mocks them to other parents whenever they goof up. 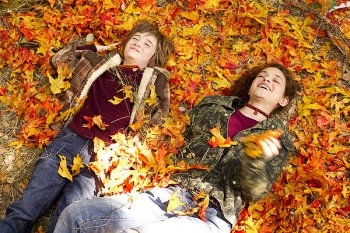 Hahahaha! It's so fun and normal how much of a nightmare creature from Hell you are!I can appreciate the idea that these people have become so jaded as parents that they need a magic dirt child to teach them how to love again, but these are not the characters that ever learn this lesson. These characters are doomed to be terrible parents forever, and I actually left the theater feeling bad for their children, who almost certainly are going to grow up being hateful parents themselves. Despite their ridiculous story about a magic dirt kid that helped them save the town, Jim and Cindy are the perfect candidates for adopting a child because their magic dirt kid allowed them to live out their wildest dreams of rubbing their awesome parenting skills in everyone's faces. I'm no expert, but that seems to be what good parenting is all about.

Not to belabor the point, but thematically, this film is all over the fucking place. There's the depressingly anti-parental undertone, but then there's Odd Life's bizarre fascination with pencils. I genuinely do not understand this. The film takes place in Stanleyville, The Pencil Capital of the World. Jim works in the town's pencil factory; Cindy curates the town's pencil museum; Timothy's soccer team is named the Erasers. Everything in this film revolves around pencils, and yet there is not a single writer or pencil-centric professional in sight, nor can I decipher any theme regarding lead-based artistry or creation. Why? Was there some grand metaphor regarding pencils that didn't make it into the final product? Did writer/director Peter Hedges just need a handy visual cue to return to? Color me utterly baffled.

"Pencils" is not a theme; "Don't hate your children" is not a lesson. I would call The Odd Life of Timothy Green misguided, except I'm not entirely certain it even knows where it's going. Joel Edgerton and Jennifer Garner go a long way in making their characters not immediately irritating, and CJ Adams looks enough like a tiny Jim Halpert to make Timothy punchable yet endearing, but I can't in good conscience recommend this film to anyone. Maybe if you're looking for a family film that will leave you confused and your kids terrified of their friends' parents. In that case, Odd Life is a winner.

MINORITY REPORT: The plot synopsis makes this sound like a nightmarish horror film, rather than a saccharine family drama. I wouldn't be surprised if it was conceived as such. A horror film about the fear of impotence. Might explain the pencils too. - Ian "Professor Clumsy" Maddison