EXPECTATIONS: Resident Evil has the dubious distinction of being the only franchise I've twice walked out on. "Fool me once," as the old saying goes, but I followed two different groups of friends to Resident Evil and Resident Evil: Apocalypse. We don't talk anymore. Whether that's because I'm a party-pooper or their shit taste in movies adversely affected our friendship (i.e. they tried to hound me into appreciating Resident Evil so I eventually snapped, killed them and left the corpses in Nevada), I cannot say.

However, it's been six years since I've given these movies a chance. Being the dutiful critic, I decided to marathon the four canonical Resident Evil films in the 24 hours prior to Resident Evil: Retribution's glorious debut at the local multiplex -- where, coincidentally, it's preempting a very special IMAX showing of the Indiana Jones films. But that's neither here nor there.

Here are my impressions of those four films, in a nutshell:

Resident Evil: Apocalypse: Not quite as shit. 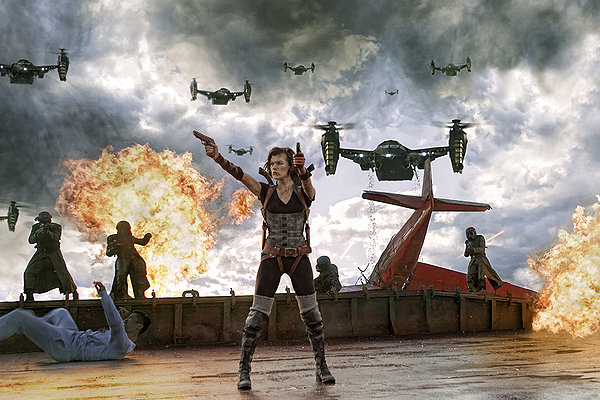 REALITY: There are three competing theories that might explain my response to Resident Evil: Retribution:

None of this is to say that Retribution is actually good -- because it's, like, totally not -- but this is Anderson's most interesting and competent film since Event Horizon, which is seeming more and more like a fluke. It's also a teensy-weensy bit better than Extinction, which benefited from a somewhat plausible scenario as it followed survivors eking out a life in the desert where I buried my asshole friends, which means ... yep, Retribution ... and it pains me to write this ... is the best ... and, by best, I mean least-worst ... Resident Evil film. Congratulations, Mr. Anderson: I've no reason left to live.

To understand my somewhat positive feelings toward Retribution, you must understand my utter loathing for Resident Evil. Resident Evil isn't merely a bad film; it's offensive. In making that film, Anderson showed an utter disregard for his audience's intelligence and eyesight. 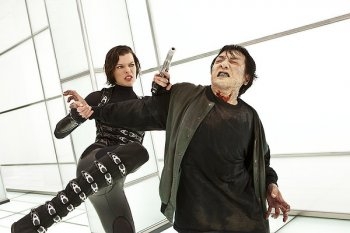 Why is this image boring?For example, Anderson was an early adopter of CGI blood, which looked fake as hell in 2002 and hasn't improved much in the interim, but he didn't employ CGI blood to save money on practical effects. There's a shot of a corpse lying in a pool of CGI blood, which means Anderson couldn't afford corn syrup and red dye on a $30 million budget. Where did he spend the money? Certainly not on buying a decent score, considering Marco Beltrami and Marilyn Manson phoned in the laziest mix of industrial droning and atonal guitar shredding since Ghosts of Mars. Certainly not on hiring a decent actress, considering Milla Jovovich serves but two functions in Resident Evil: getting naked and kicking dogs. Certainly not on a script polish from a screenwriter who's worth a shit, considering the dialogue is as functional and stilted as any. Resident Evil is defined by shitty effects, cinematography, music, acting, characterization, plotting, set design, physics -- you name it. Anderson pitched the movie at adolescent morons, threw up his hands and said "Good enough."

And, yet, it became a hit. It grossed upwards of $70 million. Resident Evil became Anderson's own Star Wars saga. Fat, happy and lazy as ever, Anderson kicked back and wrote the next two entries so he could focus on directing AVP: Alien vs. Predator (a film that defines its own acronym in the title) and Death Race. Fast-forward to Afterlife, which superficially reflected its budget increase: It's easier on the eyes and tomandandy's score is kinda OK at times. On the other hand, the remaining faults were magnified tenfold. Oh, and while I'd never call Resident Evil original, just about every aspect of Afterlife was plucked from another movie (usually The Matrix) and misappropriated, resulting in 97 minutes of nonsensical garbage.

The film begins with Alice (Jovovich) breaking the fourth wall to explain the plot so far. Who is she talking to? Why, she's talking to you, dear reader, with all the talent a rendered cutscene character can muster. You're her accomplice. You're the Otacon to her Solid Snake, the Nadia to her Joseph Stalin. After she's done explaining the plot of Resident Evil, which makes about as much sense as I do after two fifths of vodka and burying my friends, we cut to a shot of her floating, presumably dead, in the ocean for reasons too convoluted to describe. The camera moves toward her eye and BAM! --

We're jerked into a suburban bedroom, where a now-blonde Alice lies sleeping. Is this an alternate reality? She wakes, learns she has a husband and a deaf daughter, and makes breakfast for the family, as any dutiful housewife would. Before you can say "too good to be true," her family faces an onslaught of zombies. They bite her husband. She swoops up her daughter, escapes into the attic, drops down from the other side of the attic, runs outside to find a neighborhood overrun with zombie hordes and gets into a car piloted by a very confused Rain (Michelle Rodriguez).

For the forgetful, or those smart enough to avoid Resident Evil, Rain was one of Rodriguez's signature tough-talkin' Latinas, a role she somehow parlayed into a career. In this reality, Rain isn't a super-soldier but a fellow suburbanite -- rather bohemian -- who crashes the car in the chaos, forcing Alice and her daughter to return to their house and face the now-zombified husband and father. Sound familiar? It should. The exact events have been juggled around, but in tone and copied shots, this is pretty much the prologue to the remake of Dawn of the Dead. It's also Retribution's most effective sequence, even if it relies more on audio shocks than mounting dread. After the zombie onslaught, a paramilitary squad led by a different permutation of Rain shoots the ever-loving shit out of their house and BAM! -- 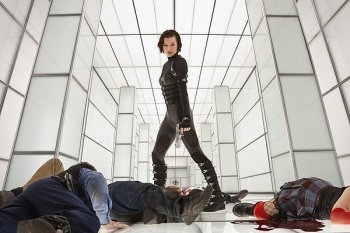 I guess the whole film looks like this.We're jerked into a cylindrical room, all-white except for the ornate Umbrella Corporation logo covering the floor. After a bit of dialogue, Alice walks through a door and winds up in ... well, I'll stop there. Needless to say, it apes aspects of Portal 2, Kill Bill: Vol. 1, The Matrix, Inception, Underworld -- Underworld! -- and maybe a dozen other movies I haven't seen before the 20-minute mark. By the end of the film, it will present itself as a tapestry of homages to other, better films, including Outpost and The Raid: Redemption. The point is, the homages kinda work this time around, like a mixtape of off-day live versions of your favorite songs.

Furthermore, in spite of (or maybe because of) the continued lack of characterization, the numbingly repetitive gunfire and the wide array of impractical outfits into which female actresses are stuffed, Retribution kinda works as a video game rendered unto screen, complete with dead-character continuance, levels with clearly stated objectives, clumsy exposition, ham-fisted plot twists, heavily stylized villains with no explanation of character, end bosses and -- I shit you not -- an invincibility power-up. If Resident Evil is shareware Doom, Retribution's at least Rise of the Triads because Anderson no longer attempts to connect the world of Resident Evil, with all the idiosyncrasies of a first-person shooter, to our own, and -- in fleeting moments -- we can halfway bask in the gonzo bloody glory of Anderson's creation.

I wouldn't, in a million years, recommend Retribution to anyone outside of these two groups: die-hard fans of the franchise or the masochistic and curious, those seeking a Resident Evil highlight reel without having to slog through four shit movies. After all, that opening prologue does a damn fine job of showing the violence and little else from the previous films.

MINORITY REPORT: Look at that towering score! After the absolute travesty of Resident Evil: Afterbirth, I was about ready to write the franchise off, but now you tell me it's almost reached mediocrity? That means that about fifteen sequels down the line, these might start getting good. Can't wait. - Ian "Professor Clumsy" Maddison