EXPECTATIONS: So, this is the kind of lavish costume drama that attracts impressive cast lists and ends up being a bit dull. And this is directed by Joe Wright, whose films are always a bit dull. Plus it stars Keira Knightley, who has a tendency to be a bit dull. Overall, I think this is going to be terrific fun.

REALITY: It turns out that Anna Karenina is, unfortunately, a bit dull. Actually, that's something of an understatement; after an inventive first act, it devolves into a long, boring series of depressing developments culminating in suicide-by-train. Overall, it's terrific fun. 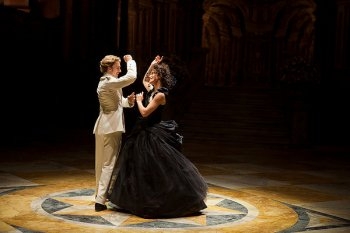 It's not a musical, don't bother getting excited.When the titular Anna Karenina (Knightley) goes to Moscow to convince her sister-in-law (Kelly Macdonald) to forgive her brother (Matthew Macfadyen) for being adulterous, she happens to fall in love with Count Vromsky (Aaron Taylor-Johnson) and begins to get rather adulterous herself, to the obvious chagrin of her husband Alexei (Jude Law). Meanwhile, young Levin (Domhnall Gleeson) is pining for Anna's niece Kitty (Alicia Vikander) and vainly pursuing happiness in the face of immense wealth and youth.

One has to wonder if we are supposed to relate to these characters and their plights or if we are supposed to hate them. There are times when we are invited to laugh at them, certainly, but when you spend two hours watching horrible people screw each other over for no real reason other than societal expectations, it's enough to make you either nod off or walk out. I suggest the former, unless you snore.

It's not all bad. The prologue and first act introduce us to a very interesting framing device. A great deal of the film takes place within an old theatre, with scenery adorning the stage, the auditorium and even the rafters and attic. It's an interesting stylistic choice, and early scenes have very inventive transitions from location to location as extras become stagehands, move scenery, change costumes and resume acting in impressively choreographed rhythmic flourishes. As the film wears on, they largely abandon this conceit, but whenever it is resumed it makes for some interesting visual storytelling. I'd have liked the entire to film to continue in this vein, rather than being dropped whenever inconvenient for location shoots or more grandiose scenarios. 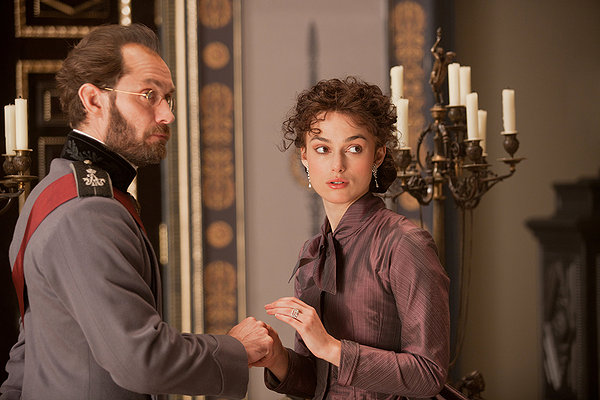 Jude Law pulls off the receding hairline with reassuring aplomb.

The cast is generally brilliant, with Domhnall Gleeson the real stand out. It seems like this guy is in a new film every week these days, after his recent roles in Shadow Dancer and Dredd. Here he makes for a much more engaging presence than Knightley, and you're glad when the film turns its attentions toward his story and away from that of the title character. Knightley is actually the weakest link, never really giving us a good handle on the character. I never once felt that Anna Karenina was a human presence. Everyone else is great, though, and it's nice to see Looking For Eric star Steve Evets popping up in films every now and then.

It all just reaches a point, though, where you start feeling nostalgic for the humourous, visually inventive film that you got a glimpse of an hour ago. What happened to that balletic, theatrical, witty film we were watching? When did it become a grim film about people I hate being depressing on trains? What film is Domhnall Gleeson going to be in next week?

I think the worst misstep here is that there is absolutely no cultural relevance to be found in the whole film. You don't adapt Tolstoy just because you like his work, you have to find something in there that modern audiences can take away from it. Knowing that 19th century Russian high society had a lot of societal rules that flew in the face of basic humanity is historically interesting, but what relevance does it have today? These days, you'll be hard-pushed to find anyone willing to give a shit about rich people committing adultery and suicide (in that order).

MINORITY REPORT: I want Joe Wright and Edgar Wright to make a giant theatrical period film where Simon Pegg and Nick Frost try to build flying machines but are torn apart because they are both in love with Keira Knightly. It would be called The Wright Brothers, and it would be insanely meta and also awful. - Martin R. "Vargo" Schneider