EXPECTATIONS: In spite of a generally positive response, Berberian Sound Studio has kind of snuck its way out in a very limited cinematic release. However, it is also available via Curzon On Demand for the rather princely sum of ten whole English pounds. I suspect it will be worth it, though. At least, I hope so.

REALITY: Berberian Sound Studio, in spite of its rather tepid-sounding title, is an absolutely stunning experience that makes for the high point to an already stellar year in cinemas. There is never a dull moment in its 92-minute running time as it plays freely with cinematic language, editing, contradictory soundtracks and surreality. This is writer/director Peter Strickland's loving (and damning) tribute to the days of the Italian giallo film. 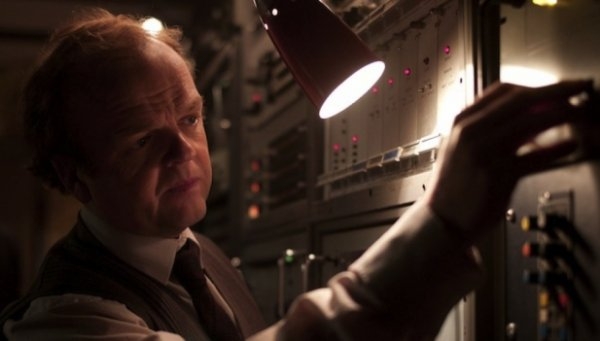 It can be difficult to describe Berberian Sound Studio to a general audience in a way that doesn't make it sound incredibly dull. On the other hand, with more "filmy" people, the premise alone has them salivating. Just see how this strikes you: In the 1970s, English sound engineer Gilderoy (Toby Jones) travels to Italy to do post-production sound work on "The Equestrian Vortex," a horrific exploitation film directed by Giancarlo Santini (Antonio Mancino). Gilderoy is used to nature documentaries and children's television, so he finds the content of Santini's film, the bullying tactics of producer Francesco Coraggio (Cosimo Fusco) and his alienation from Italian culture all a bit too much to handle, and his sanity begins to suffer for it.

If a film about post-production sound engineers making a gore film doesn't exactly float your boat, then you're probably also the kind of person who isn't likely to get excited about shots of long analogue tape loops that span entire rooms or slow tracking shots of Gilderoy's painstakingly precise timing notes, which is to say: you're probably a normal person. Not that this will hamper your enjoyment of Berberian Sound Studio at all. This is a horror film that does not rely on scares or deal in particularly horrific imagery. We hear the atrocities being depicted in "The Equestrian Vortex," a film about undead witches exacting revenge for the tortures they had to endure, but what we are seeing is the process of producing the sound, and the techniques begin to reflect the central elements of that film-within-the-film. Pieces of equipment and neatly written notes become archaic paraphernalia, and Gilderoy's work is a form of witchcraft in itself. He can conjure up a UFO with only a light bulb and a toast rack; there's no actual UFO, but you can definitely hear it. Imagine what he can conjure up for this project! 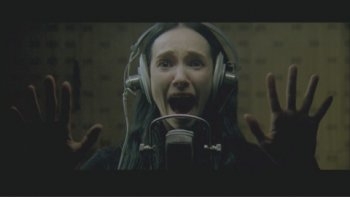 See? It is a horror film.Where the film really shines is in its presentation of the art of foley, a process in which artists use household items to create sounds for film. Gilderoy and his foley artists, Massimo and Massimo, rack up an impressive body count of stabbed cabbages, dismembered watermelons and mutilated radishes, the rotten carcases of which build up gradually in a huge bin in the corner of the studio. As Gilderoy stabs cabbages with well-timed precision, his eyes fixated on the on-screen violence, he begins to feel implicit in the acts being depicted. When he is required to replicate the sound of a woman being violated with a red hot poker, he can't bring himself to do it, even though he is only splashing oil on a hot frying pan to get a "nice big sizzle."

Gilderoy cannot abide seeing the women on screen being mistreated and exploited. When he is asked by Santini, who frequently contradicts himself, whether he sees the women in the film as "...catholic or witch," he simply replies "I'd rather not get technical" because, of course, he doesn't think of women that way. Santini's treatment of women becomes overwhelming when he sexually abuses his lead actress Silvia (Fatma Mohamed) and the world of the "The Equestrian Vortex" and Berberian Sound Studio become one and the same. Gilderoy has given part of his soul to a film he considers reprehensible, and he is forever changed because of it.

This leads to the film's most divisive point, its third act. As the film draws to its conclusion, it steps away from logical plot progression into something entirely cinematic. Personally, I loved it and actually felt it was a fitting denouement, while others have condemned it for making no sense. I think if you consider what you hear to be just as important as what you see, everything makes cinematic sense, even if it defies logic. Logic is over-rated anyway when you can elicit terror without it; terror itself is enough.

This is a film that leaves you with a lot to think about. Thanks to the on-demand service, I was able to watch it twice and found it just as rewarding the second time around. Even if you reject the surreality of the piece, you'll find that the film's approach of employing cinematic techniques to draw attention to themselves will make you question the sincerity of your own reactions to the things you see and hear. This is one that is not to be missed.