EXPECTATIONS: Hugo is a logic-bending move that has me intrigued. Yes, Martin Scorsese, a man who loves his dramatic violence, is making a holiday family film, whatever. I'm much more interested in Scorsese's decision to film in 3D. (Also, he's filming in Widescreen instead of Cinemascope, but that's only interesting to basically no one.) It's exciting to imagine what Scorsese, one of the most cinematographic storytellers in movie history, can do with technology that I am frankly bored to tears with. Plus, it'd be really cool if Ben Kingsley smashed someone's head in a vice in glorious 3D.

REALITY: Sometimes you see a movie, whether good or bad, that is clearly not what the studio wants it to be. Maybe I've been made cynical by all the horrible cash-ins we're forced to endure here at Current Releases, but it's pretty obvious that the logic behind this film was "Get a famous director, make a holiday family movie, instant classic, lots of money." However, lucky for all of us, they chose a director famous for saying "Hell with that, I'm making art." 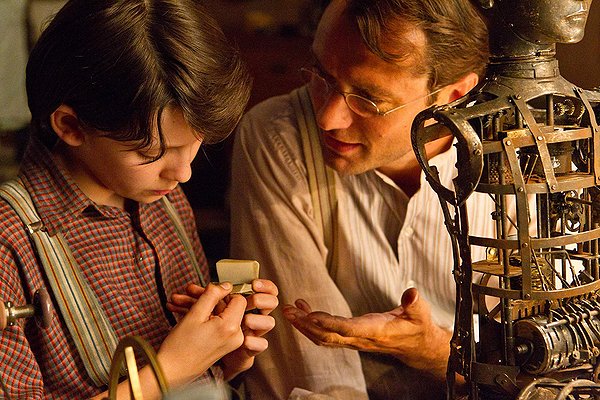 Hugo tells the story of Hugo Cabret (Asa Butterfield), an orphan living in a Paris train station in the 1930s. Hugo runs the clocks in the station, and spends his time stealing food and spare parts from the toy shop so he can fix the wind-up automaton left to him by his father (Jude Law). After he is finally caught by George the shopowner (Ben Kingsley), Hugo serves off his punishment working in the shop, where he befriends George's goddaughter Isabelle (Chloë Grace Moretz). After discovering that Isabelle holds the missing piece to complete his father's discovery, the two set out to learn the secrets that George is hiding and how it links them together. 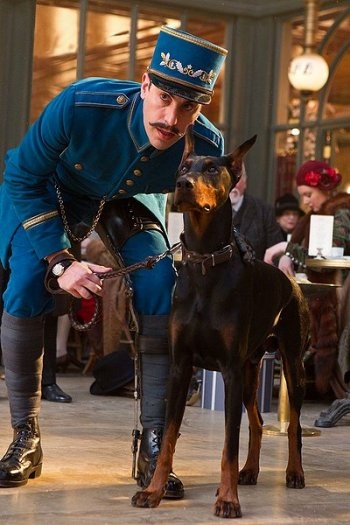 Good moaning, Doug.Despite what the ad campaign wants you to think, and the fact that Chloë Moretz is doing her very best Hermione Granger impression, there is little to no magic in Hugo's world. At least not in the traditional sense, that is. It's very hard to describe exactly what Hugo is, because there hasn't ever really been anything like it. It feels wrong to call it a "family film," though that might just be because that phrase has somehow become synonymous with "wacky talking animals."

The film doesn't insult the viewers' intellect, and in fact may be the first movie a generation of children sees that actually challenges them. The movie doesn't start with "Once upon a time there was a boy called Hugo..." (Though it does end that way.) We're not told Hugo's backstory, who he is or what he does right off hand; we're forced to discover it through flashbacks as the story unfolds. Similar to Drive, the first twenty minutes of the film are extremely light on dialogue, but younger audience should have no problem understanding what's going on and, better yet, wanting to learn more. This is a movie designed for all ages, one that truly treats all ages like equals. I thank Scorsese for doing this.

Partway through the film, Hugo takes Isabelle to the movies in a purely innocent scene that still feels dirty to anyone who's seen Taxi Driver. From that moment on, the movie changes entirely. It becomes a movie about movies, and a celebration of those who love them. Without giving too much away, even though IMDB does, George's secret links him closely to the history of film, and of course it does. Of course Martin Scorsese uses the very latest in cinematic storytelling technique to give us a history lesson in where it all started. What makes Scorsese special is that he is a filmmaker first and a storyteller second. He really, really loves the use of film as a storytelling medium, and as a result, the more you love movies, the more you will love Hugo. Every part of Scorsese and his influence shines through each frame of the film, which draws parallels to everything from French silent film The Red Balloon to Frankenstein to the works of Buster Keaton to Peter Sellers to Backdraft of all things. This isn't "Scorsese makes a family movie." This is "Scorsese makes a movie without swearing."

Of course it helps that Scorsese is one of about three directors in Hollywood who understands how to use 3D. (The other two being James Cameron and the guy who made Drive Angry). Whereas most 3D movies shove things out at the audience, Hugo uses this technology to make the background smaller, and by doing this, creates depth. This basically turns the screen into a stage; it turns your theater into a theatre. For example, when Hugo is following George home, we can almost measure the changing amounts of distance between them, as Ben Kingsley seems to literally walk into the screen. It's also effective in character development. Sacha Baron Cohen's Station Inspector plays like a bumbling Inspector Clouseau-type character until the 3D makes him huge and yelling directly in our faces, making him genuinely intimidating. And yes, there is one "sharp thing poking out at the audience" shot, because Scorsese couldn't help himself. It's worth noting that James Cameron said Hugo is the best use of 3D he's ever seen, making Scorsese the first person James Cameron has ever said was better than him at anything. 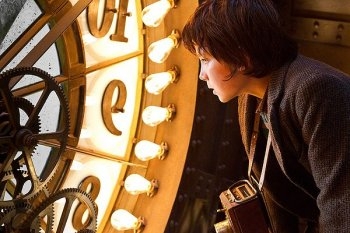 Anyway, the clockwork mechanisms serve more purpose than just looking really cool in 3D. They show that each member of the story is important, and we spend a lot of time in the lives of minor characters who might not ever see our protagonists. We also get background on a major antagonist that makes the audience want to hug him and feel sorry for him. (This might be the first movie your kids watch with a morally ambiguous villain.) The characters and the actors are so rich and colorful that you really want everything to work out for everyone in the end. We even bring in Christopher Lee and Ray Winstone for minor parts because, well, we can.

Which brings me back to my point about the magic in Hugo being different than the magic we normally see in films. Martin Scorsese really believes there is magic in the movies, and in books. He wants us to believe it, too. This isn't a movie that will entertain children with shorter attention spans. It runs a little long, and at least one dream sequence feels unnecessary. but those who are enthralled by it will have their minds and their horizons expanded. This is a family movie in that it's meant to be watched by children with their parents, and preferably their grandparents. It's there so Grandpa can see Buster Keaton on screen one more time, and show the kids that the man hanging from the clock is part of a real movie. Then the kids can show Grandpa how easy it is to find that movie on YouTube. The film has a subplot about the importance of historical film preservation and how it can connect generations, something we at Something Awful have seen in our very forums. We live in a world where films made nearly 100 years ago can be pulled up on Netflix Instant Watch, where nearly all Victorian-era literature can be held in a Kindle. Martin Scorsese thinks this is magic, and you know what? So does Martin Schneider.

MINORITY REPORT: In a perfect world, every film for kids would be like this. And all the films for adults would also be good. This is a perfect world I'm talking about here, what did you expect me to say? - Ian "Professor Clumsy" Maddison