The Skin I Live In

EXPECTATIONS: One of Spain's top directors turning his lens toward a horror thriller that's been compared to Frankenstein and Eyes Without a Face? Count me in!

REALITY: With its leaps and twists, the plot of The Skin I Live In is not a sturdy frame on which to hang a film. Despite Pedro Almodóvar's best efforts, his approach to the material is certainly the wrong one.

Dancer Vera Cruz (Elena Anaya) is locked in a room, under the constant surveillance of Dr. Robert Ledgard (Antonio Banderas). Ledgard is on the verge of perfecting an artificial skin some time after he watched his wife die from burns over most of her body. I will not reveal any more of the plot, the surprises of which must be preserved if one's going to derive any enjoyment from The Skin I Live In, except to say the nonlinear structure doesn't suit it. The film drops us in a random point in the plot, alienating us from the start, when placing the second act before the first would be far more useful for the audience. 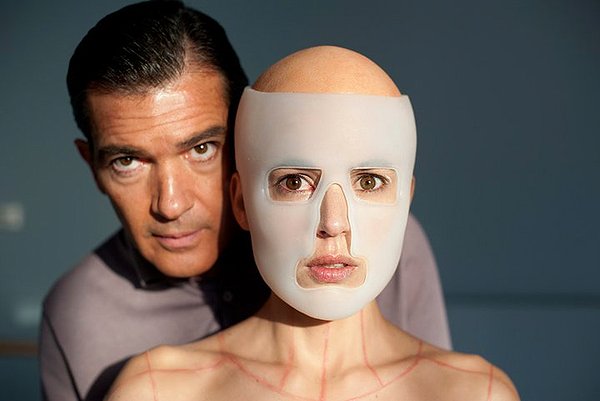 Honestly, you look fine. Nobody will even notice.

Almodóvar's chief failing here is his own tasteful restraint, which has garnered him comparisons to Alfred Hitchcock. Thing is, Ol' Hitch took his material as far as contemporary mores would allow, often pushing buttons and, over the years, gradually relaxing content standards; while Psycho may seem tame by today's standards, contemporary audiences reacted strongly to its violence. 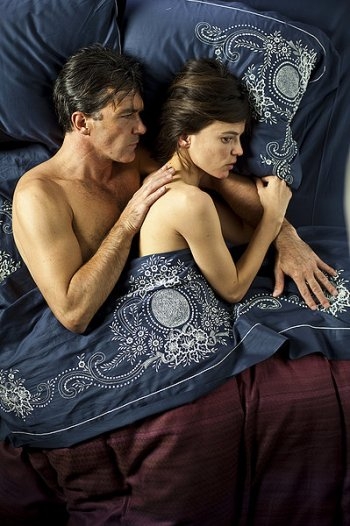 Something about this doesn't seem kosher.Psycho is a useful comparison because The Skin I Live In contains similar elements. Without spoiling what they share, let's just say material like this demands lurid treatment in its appeal to prurient interests. Just as Nip/Tuck and The Human Centipede -- two other useful comparisons, given plot-point similarities -- revel in bad taste, so must The Skin I Live In. Unfortunately, Almodóvar (who's never shied away from controversy or met an NC-17 he didn't like ... until now) cuts his shot even though the Almodóvar of ten years ago would've, prudently, held it. The Skin I Live In may be rated R "for disturbing violent content including sexual assault, strong sexuality, graphic nudity, drug use and language," but that's deceptive; a good chunk of the disturbing content is implied and the film feels rather tame.

As for the two or three sexual assaults, one toes the line between rape and rough sex so skillfully that we're not quite sure it is rape until its climax (no pun intended), and the others aren't given much cinematic weight. Sexual assault is treated here as little more than a plot point. (Incidentally, advertising for The Girl With the Dragon Tattoo and the resulting fashion trend, which finds rape-victim chic, leads me to think this lightweight treatment of sexual assault is becoming A Thing.)

Part of this problem lies in Almodóvar's failure to really connect us with a female character. The film, like its antihero, is icy and clinical, and we're never allowed to look below the surface. Things happen so more things can happen, until we reach a climax in which something happens, the implications of which are pretty fucked up when examined through the lens of feminist or queer critique.

In this mess, cinematographer José Luis Alcaine finds some unique and beautiful imagery; anyone prepared to enjoy two hours of wonderful photography will find a lot of value in what Alcaine, costume designer Paco Delgado and art director Carlos Bodelón have created here.

To their credit, Alcaine and Almodóvar find new angles on elements from films past -- rarely does the camera capture a conventional angle -- but beauty alone can't sustain a narrative film. Something needs to move beneath the surface and, in The Skin I Live In, nothing ever does.

MINORITY REPORT: Not to be a grammar Nazi, but shouldn't the title be The Skin in Which I Live? - Ian "Professor Clumsy" Maddison