EXPECTATIONS: All the marketing for Arthur Christmas makes it look incredibly inane, but with a good British comedy pedigree behind it, I think I can afford myself a little cautious optimism.

REALITY: It turns out that Arthur Christmas has been completely mis-marketed. This is not about the wacky adventures of an army of overzealous, gift-wrapping elves; it is, in fact, a much more intimate story about a family business operating in the modern world.

It's the North Pole, and young Arthur (James McAvoy) works in the letters department of Operation Santa Claus, happy to contribute to the Christmas effort in the shadow of his efficient brother Steve (Hugh Laurie), the next in line to the title of Santa Claus. The current Santa Claus (Jim Broadbent) is on the verge of retirement, performing what should be his final Christmas, when he learns a child in Cornwall has been skipped. Arthur and his grandfather (Bill Nighy) decide to do the right thing and endeavour to get the last child her present by any means necessary. 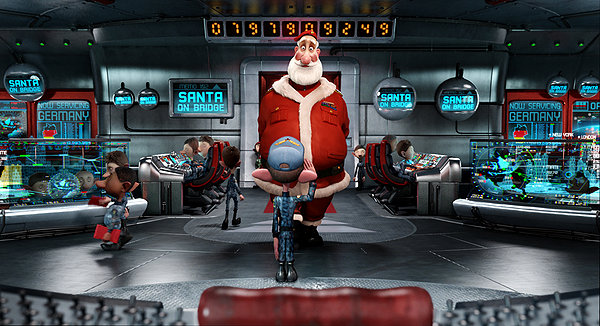 In order to complete this task, Arthur and "Grandsanta" take out the old sleigh, pulled by eight reindeer as we would all expect, rather than the ridiculous spaceship that is used by the current Santa. The idea being that returning to the legend is immediately more magical and wondrous than an army of elves rappelling from a flying fortress. The true answer, as you may have predicted, lies somewhere in between. Modernisation is fine, so long as it doesn't get in the way of the "family" part of your "family business." Rather fitting when you compare Aardman's origins in quaint animated shorts to its current output of major CGI animated feature films. Even more fitting when you consider that Aardman's next release is a return to stop-motion animation. 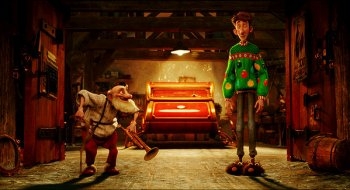 Empty sheds. That's what Christmas is all about.The scenes in which the Christmas family sits down to Christmas dinner are the best in the film: A simple board game devolves into bickering while the eldest son taps away on his hand-held device and the youngest is just determined to have everyone band together and actually enjoy themselves. That's what Christmas is all about, and it's exactly what this film is about, family for better or worse, usually for worse.

The whole adventure plot doesn't work quite so well, so it's refreshing to see that this is a film that plays to its strengths even when it has pacing issues (and it does get severely bogged down in the second act) and when it becomes very predictable. Thankfully, the gags keep coming, and there's plenty of talent in the voice cast.

There's not an awful lot to be said for Arthur Christmas, but I wish there was. It is charming and funny, and on any other week of the year it would be a refreshing gift in a world almost entirely devoid of decent family films, but this week it's the third-place option. That's not to say it's a bad film, far from it, but it is a film with very little to say that hasn't already been said.

MINORITY REPORT: How many Santa Claus movies do we need? Isn't this ruining kids' concept of Christmas? I wonder if people 500 years from now will think Arthur Christmas and Fred Claus are related. - Joseph "Jay Dub" Wade