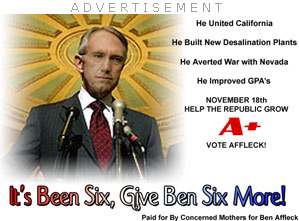 When they're gone I fish the joint out of the ashes scattered across the floor and re-light it. I feel like hammered puke and when I sway into the bathroom I can see why.

I didn't make it out of Aspen unscathed by any stretch of the imagination. My chest is covered with bruises, with a few especially nasty ones around the edges of my torso. Boiler plate didn't catch 'em all and Kevlar has a habit of turning a clean bullet wound into a bruise so severe it takes a month to go away. When I take a deep breath I can feel at least three cracked ribs.

I fish in the medicine cabinet for some tape, but it's full of woman shit. We're at Klint's real life house. He put me up in one of the studio apartments he uses to house his rotating harem of strung-out models. Not exactly the best place to go looking for a first aid kit.

I find some codeine, but I don't handle opiates well. I spent five years kicking that one. I'm not anxious to relive the DTs. I load up on enough aspirin to turn my blood into water.

I can't figure out how to work the dumbass cappuccino machine in the kitchenette so I wash my pill buffet down with a skunk beer from the fridge. I shut off the Ravi Shankar and dress in the clothes someone left next to the bed. A black track suit and some sneakers. I feel like I'm joining a cult, or at least like I'm supposed to start body poppin' on some cardboard, but beggars can't be choosers.

I limp out onto the balcony to enjoy the last drag of the joint and the dregs of shitty beer. It's hot, of course, but the view isn't bad. We're up on Mount Lee with a vantage point overlooking nearly all of Hollywood.

There are columns of smoke rising up from burned cars and derelict buildings, but otherwise the city looks pretty quiet. The last groups of rioters from the night before have already crawled back to whatever holes they call home. The Greenbeans are breaking up their roadblocks to open the streets up for traffic. The LAPD is shoving wreckage out of the way with their dozer tanks.

I look over at the house's circular drive. There's an Escalade parked there with a couple people standing next to it.

The sleep fades from my eyes with the last drag on the joint and I strain to make out what's going on. Looks like Howser - no, it's Rollins - is talking to Eduardo. Rollins has a big duffle bag, looks heavy by the way he's holding it. He hands it to Eduardo. I can't hear them, but after a few seconds Eduardo nods and gets into the Escalade. I duck back into the apartment before Rollins can spot me.

I wait a few minutes and then call Eduardo. It goes straight to his voicemail. I try again, same deal. I'm about to try a third time when there is a knock at the door.

The door opens and in walks Howser. He's got a grin like a Cheshire cat, only more evil. Bright-eyed and fucking bushy-tailed on top of that. These fucking guys.

"Got a job for you today," he says, and then pauses to admire my track suit. "Looking good."

Something isn't right here. Takes me a second to realize there is no camera crew with him. I don't like it.

"Ah, it's for the Big Stunt," he smiles, "some extra money in it for you. Just a couple deliveries to make."

"You're not paying me to deliver shit."

"I need someone I can trust," cool as ice. "Someone who is not&troubled&by navigating the area."

Yeah, the riots will be back in swing after the anarchists have had a chance to drink some espresso from Starbucks and eat some Subway sandwiches.

"Take any car from the garage, I'm sure Klint won't mind."

He holds out a pair of small locked attaché cases. Each has a luggage tag tied to the handle. I reluctantly take them from him and lay them on the bed.

"Malibu for the first one."

"Not far, just outside Malibu."

I squint in reply.

"Make it three each for me and Morrison," I scratch my head, "plus I may have to make a few stops."

He smiles instantly and that means I fucked up. He grabs a wad of 100 euro notes out of his breast pocket, divides it roughly in half, and hands it to me.

"You can count it, but there should be more than enough."

There's more than what I requested.

"You'll need to get that case to Malibu before noon. I need you back in time to meet us at the MTV studio at three. We're doing TRL. Do you know where that is?"

"The old observatory near here," he looks at the tracksuit again. "They may want you on air after yesterday's performance. You might want to pretend it's something other than a break-dancing competition."

"Don't open the cases under any circumstances."

He turns to leave.

"One question," I ask, "what was in that case we picked up in Aspen?"

"I killed an old friend of mine for you yesterday," I left it unsaid that Howser is not my friend at all. "You owe it to me."

He waves as if dismissing me.

"Your friend died for nothing," he sneers. "Dino double-crossed us. The case was full of bricks."