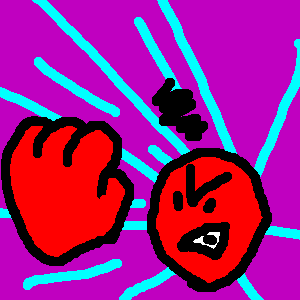 Me and a goonette hit both stores in Paramus, NJ last night. I asked about the clearance at the first store, near Garden State, and some half-witted guy nearly drooled on me as he lisped out 'theck back nexth week to thee if we have thales.' Great, please don't let me ever get close enough to you again so that I might breathe air that's been in your lungs at some point. The fat nerd at the cash register leered at my friend and spoke to her in an unintelligible explosion of nerd-garble, before chortling at her gleefully in an attempt to win her heart. Well, maybe he was trying to lose weight by moving his mouth. Anyway, there were no sales or markdowns that were immediately evident -- no $600 Apple laptops.

Are you even reading my posts, or do you, as I have suspected for a long while, exist in some sort of private parallel microverse bubble wherein the laws of physics have been defiled almost (but not quite) as grotesquely as your face, so that the gash of absolute nothingness in space-time that extrudes whatever meager mental capacity you possess (read: none) does not suck you and all the rest of creation into its center of sheer, infinite stupidity??

Does the tiny, tiny scope of this bubble--a universe of limitless possibility for an intellect of your calibur--cause you to read and comprehend the contents of no more than two spearate posts at any one time, after which some set limit of words causes your goldfish memory to stick a finger down its own tortured throat in order to regurgitate the jumbled contents of its overflowing gullet, fearful of growing fat with knowledge and intelligence, fearful that crawling too shallow out of the sea of ignorance you flounder pathetically and ineffectually in will cause in your wretched husk of a mind the thought, the realization, no, the certainty that you are a sad, worthless pile of sub-feces whose only possible recourse in life is to smash yourself repeatedly against a concrete podium, all the while begging forgiveness of the world for the singular, detestable, unmitigable sin of continuing to exist for those few minutes it takes for you to bleed to death???

And yet you, you fat, slimy fuck, you just can't help but keep shoving those words down, can you? You're afraid, but at the same time you're too much of a contemptibly hopeless loser and idiot to stop eating, you goddamn glutton, you just shove them in and throw them up and you see the lumpy, fetid, multicolored splatter at your feet and you think it's freaking Art, and it's freaking Philosophy, and in your mind--I won't even deign to call it delusional, it's simply just, perfectly, shiningly, elementally, WRONG--and in this eternally incorrect mind of yours you think that this roiling abortion is actually worth two shits (two more shits than you fucko!) and you pick it up in your fat SAUSAGE-LIKE fingers and you caress it and mew at it like the sick bastard you are and you shed a small yellow drop of grease from your crusty half-clogged tear ducts
upon which you proceed
TO HIT THE POST BUTTON
AND UNLEASH ONTO THE SOBBING WORLD
YOUR.
UNLIMITED.
STUPIDITY

My aunt gave me my graduation gift 3 hours ago. It was a playstation 3.

There is no gift receipt. She said giving me a gift card was too boring and wanted to get me something more "Useful" as she put it.

Where do I go from here? Think Wal Mart would take it back? Like I could maybe get store credit if I walk in and be like, "I forgot my receipt but this works and is unopened?"