James Cameron is an example of Hollywood's rarest and most precious commodity: a blockbuster summer movie director with art and soul. He revolutionized scifi action movies with Terminator and Aliens, but not long after the alien queen was blasted into the vacuum something went terribly wrong.

Cameron's next movie was The Abyss, a well-meaning and sometimes beautiful mess with a horrible ending. The film took place almost entirely underwater and involved lots of diving and driving around in submarines and also Navy SEALs. Fans might not have noticed something was wrong at this point, because Cameron followed it up with his contractually-obligated sequel to Terminator. As we all know, that film was totally awesome. 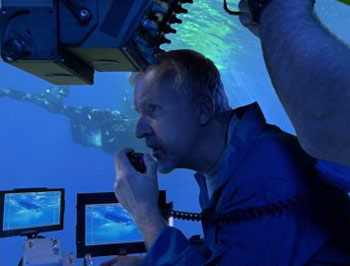 Despite appearances, things weren't totally awesome in Cameron-land. From Terminator 2: Judgment Day onward Cameron became obsessed with deep sea diving and submarines. He managed to shoehorn them into his blockbuster Titanic and he followed that up with multiple ROV dives of real shipwrecks. The deep madness still wasn't out of his system. Cameron began making strange documentaries about the deep sea and spending tens of millions filming jellyfish from bubble-canopied submarines piloted by teenagers.

He's still plugging away at his obsession, squandering a career that could be entertaining millions with great science fiction with all this science nonsense. Fans of science fiction should certainly understand that the day an article or book or TV special finally broke James Cameron's brain deserves the first spot on our list.

One of the most enduring and prolific science fiction franchises is the BBC's time travel saga Dr. Who. The show was produced until very recently on a shoestring budget, but it nevertheless captivated weirdoes and brain-fried stoners around the world. Fans loved the unusual plots and accepted the Styrofoam-and-curtains sets and monsters so cheaply executed they bordered on bizarre works of art. 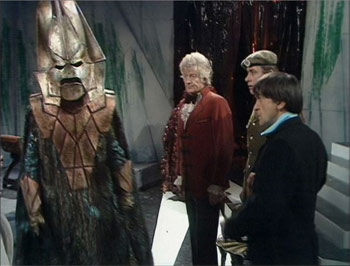 Who can forget the slimy potato that talked through a tinfoil wheel from Creature in the Pit or the living Bertie Basset candy monster? Sadly, neither monster has returned in the more recent incarnations of Dr. Who. Fans will have to continue to ponder how a computer-rendered jolly man made of candy might kill hapless victims.

The 1971 serial Terror of the Autons features what many consider to be the nadir of monster design on Dr. Who. In the episode, the bearded Master has hatched a nefarious scheme. He plans to manufacture mannequin-like plastic Autons to wander around London handing people deadly flowers that shoot cling wrap at faces. It's pretty standard for a Dr. Who plotline.

Unfortunately for the Master, some of his employees at his Auton factory aren't on board with his scheme. Well, they are, they just aren't quite evil enough about being on board for the Master's liking, so he resolves to make an example of one of them. Sure, the Master could simply kill the guy or summon one of his Autons to slowly strangle the man, but the Master prefers to discipline his minions in style. Crazy style.

Thanks to the BBC and YouTube, I can present you with the unmitigated terror of Dr. Who's killer pool chair. Click the image below to see the video. 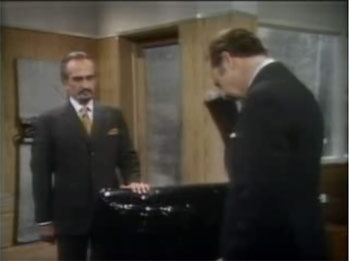 The second worst monster to appear on Dr. Who? That goddamn theme song that implants itself in your skull like some sort of Amazon River brain fluke opened a techno club in your hippocampus.