Lost in Space transported the 1960s American family into space with the addition of a creepy uncle and a stern-voiced robot. Mediocre first-season ratings prompted a comedic retooling of the series for its second season. We saw less of the stoic Robinson adults and more of the campy Dr. Smith and his boy-love Will Robinson.

The show also received the Great Gazoo treatment with Debbie, a furry alien played by a chimpanzee that was adopted by the Robinson family. Debbie made "bloop" sounds, got into mischief, and she had furry elf ears strapped to her head. Desperate for any sort of levity, the show would often cut to Debbie's response to the lame action (usually a lame monster) taking place nearby. 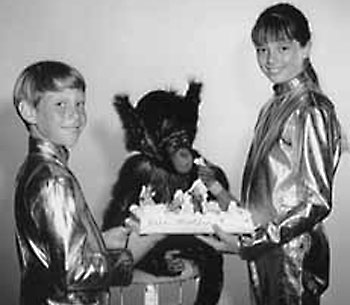 Compared to many of the foam costumes and visible zippers on Lost in Space, Debbie's ears were fairly high quality. The desperate bid to boost ratings by adding a cute animal was fairly low quality.

When I heard Kevin Sorbo was going to be starring in a straight-to-syndication scifi series based on the dream journal of Gene Roddenberry I nearly blacked out from pleasure. Hercules meeting a posthumous Gene Roddenberry concept that couldn't make it to the WB might seem too good to be true on the surface, but it turned out that Roddenberry's Andromeda was precisely as good as it sounds! 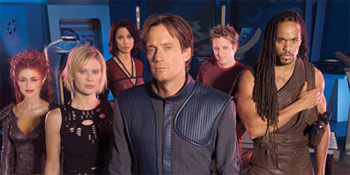 Like Earth: Final Conflict, another of Roddenberry's Tupac projects, Andromeda had a much darker atmosphere than the Utopian Star Trek. Take, for example, the muscular Nietzscheans who follow the ancient teachings of Nietzsche about wearing little vests to show off their pectorals. They live on their own planets and really hate the evil humanoid bats, just like Nietzsche always said.

If you liked Farscape, but you hated the Muppets and the characters and the story, then Andromeda is definitely worth buying on DVD. It's also worthy of its 14th place spot on the list of Most Awful Moments in Science Fiction.

Entertaining Aliens-knockoff Pitch Black introduced the world to Vin Diesel and Richard B. Riddick, a sociopathic career criminal with glowing eyes, bulging muscles, and a survival-of-the-fittest philosophy. Throw a little vest on him and he's a Nietzschean. 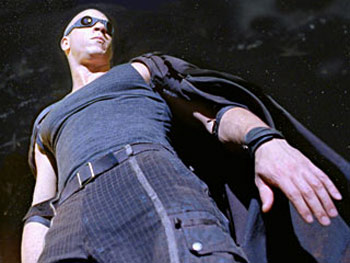 The low-budget Pitch Black did well with minimal expectations and it helped propel Vin Diesel to stardom. Once he became a star Vin Diesel wanted to explore the deep character of Riddick by making him the centerpiece of a multi-movie chronicle and multimedia onslaught. What was once an interesting character in a modest action movie became the centerpiece of a high-budget sequel, a video game, and a cartoon.

The video game was good, the cartoon was forgettable, but Chronicles of Riddick was epic. How epic? I'll let an excerpt from the Wikipedia plot summary explain:

Imam goes on to introduce Aereon, an air elemental, who arranged for Riddick to be brought to Helion. Aereon explains to Riddick that he is in-fact part of a prophecy which states that a lone Furyan would one day challenge an unstoppable evil force and bring balance to the universe. Aereon reveals that a race known as the Necromongers is the army that the prophecy foretells of. Following this revelation, the Necromonger army attacks Helion Prime...

It goes on and on like that for several paragraphs talking about some place called the UnderVerse, people pulling souls out of bodies, and mastering the power of Furyans. Gee, I don't remember any of that shit even mentioned in passing in Pitch Black. Layer upon layer of ridiculous bullshit mythology slathered onto a bullet-point of a character like Riddick does not make the next Star Wars. It doesn't even make the next Beast Wars. 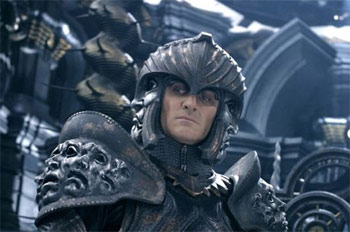 Should you bother to watch the movie, and you shouldn't, you'll learn that an hour of exposition about air elementals and guys in ridiculous Skeletor costumes turns out to be a big convoluted excuse for Vin Diesel to rasp one-liners after stabbing people. He also likes to tell anecdotes about being in prison and being tough as heck.

Sound good? No? Well, just you wait wait until you hear what he says after he stabs the head Skeletor guy! It's gonna be breathtaking!