Frank Herbert's Dune is one of the greatest science fiction novels of all time, and anyone who claims otherwise is a liar and hellion. A hellion, sir. Frank followed up his magnum opus with a mixed bag of sequels. Like so many other settings, the Dune follow-ups failed to quite live up to the original.

The films and video games based on Herbert's work have been far less impressive. Director David Lynch's Dune was an ugly and bizarre mess that failed to impress all but the handful of strange degenerates that love both David Lynch and Frank Herbert. The SciFi Channel's Dune mini-series was cheaply made and full of ridiculous costumes that made Sting's codpiece in the Lynch movie look like a Marine Corps dress uniform. It was followed by a second mini-series based on later books that was even worse. 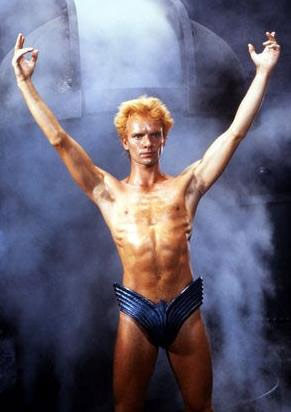 Westwood's Dune video games were fun, but extremely campy, and based more on the Lynch movie than the novels.

These are the sort of indignities any successful novelist might suffer if he writes a best-selling book. The true horror visited upon Frank Herbert's Dune is the series of appalling prequels that have been written by his very own son. 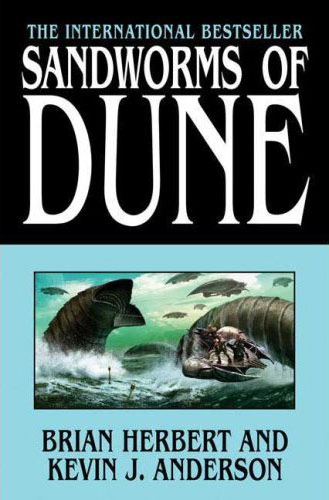 Even if you have never read a Dune book, the plot synopsis of the latest Dune novel written by Brian Herbert and Kevin J. Anderson should be enough to get your blood boiling.

Sandworms picks up where Hunters left off: The no-ship Ithaca is still searching for a new homeworld for the Jews and Bene Gesserit, while Duncan evades the tachyon net of the old couple, now known to be Omnius and Erasmus. In the Old Empire, Murbella attempts to rally human kind for a last stand against the Thinking Machines. The New Face Dancers continue to infiltrate the main organizations of the Old Empire at all levels, having also sent the gholas of the Baron Harkonnen and young Paolo Atreides to Omnius' capital, Synchrony.

Brian Herbert has not just tarnished his father's legacy, he has ridden atop a burning money train straight down the gullet of his father's dessicated corpse, exploding it in a shower of creepy sex scenes and lame multi-page descriptions of giant robots fighting. Burn in hell forever, Brian Herbert. I hope you slip and fall in that new bathroom.

The year is 1989 and George Lucas has just defeated an evil empire. No, this isn't a Harry Turtledove novel, this is the real world, and Star Wars has just brought down the Soviet Union. 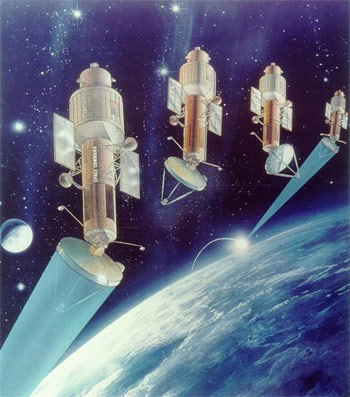 Back in 1983 President Ronald Reagan, forgetful saint of the right wing, announced that the United States would be spending around 750 kajillion dollars on a new anti-nuke program called the Strategic Defense Initiative. The SDI program was extremely complicated, but it boiled down to paying a bunch of different defense contractors tons of money to design anti-nuke lasers and widgets to put up in space that wouldn't be feasible for about 200 years. That was phase one. Phase two was pretending it was just around the corner and dangling it in the face of the Russians.

Maybe phase one sucked, because it seems like you could have just skipped that phase, but phase two worked like a charm. The Soviets went apeshit at the announcement and started pointing to a bunch of treaties and regulations that Americans don't have to follow because we have free spirits. Worse still, the Soviets didn't have 751 kajillion dollars to build their own. They didn't even have 200 kajillion dollars. All the spending to keep pace with the United States was ruining the Soviet economy. 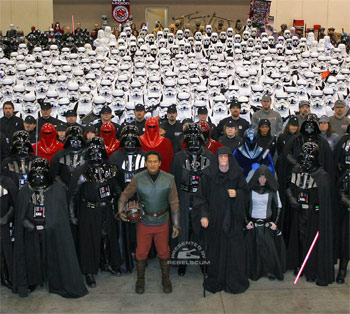 Naturally, the Democrats in the United States didn't like all this spending on non-functional lasers that we were never going to put in space. One Democrat named Ted Kennedy referred to the program derisively as Star Wars. The name stuck, but the derisive part didn't. Within days news programs had mocked up all kinds of really dumb graphics and constantly referred to the program as "Star Wars" with scarcely a mention of "Strategic Defense Initiative."

All of the news graphics of green cylinders exploding red wireframe bullets next to planet earth struck fear into the hearts of the Russians. They believed that President Reagan had just declared star wars on them and he was prepared to muster all of America's X-wings to wage war against their bullets. With that kind of firepower they knew they didn't have a chance.

Not much later, Soviet supreme dictator Gorbachev arrived in America to sign his surrender documents. The ceremony was attended by President Reagan, who took Gorbachev's sword, as well as Han Solo and Luke Skywalker. Chewbacca was not given a medal by the Princess.

From that point forward, the name Star Wars would be directly linked in history with the fall of one of the greatest empires mankind had ever seen. That, ladies and gentlemen, is as awful as science fiction gets.