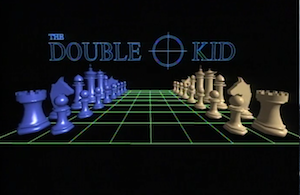 Overview: A madman tries to crash a plane full of environmental scientists into the Bermuda triangle, using a computer virus to do it remotely because he's also a weird shut-in. The planet's only hope? A 15 year old CIA intern with delusions of grandeur and negative self-awareness. Place your bets.

The Case For: If you like your foley work to be as irritating as possible, you'll enjoy the water pistol that sounds like a .44 Magnum and other assorted sonic anti-delights.

The Case Against: Corey Haim as Lance Elliot, mildly autistic wanna-be spy teen, who travels from Philadelphia to L.A. to wander around being smug and pissing everyone off, from CIA agents to supervillains. Basically, he's the anti-Fresh Prince (the Stank Prince, maybe?)

Hydrogen: "Hey, what's a good title for our crappy teenage spy movie that makes it sound as unoriginal and cliched as possible? Oh, I know, how about The Double 0 Kid? And let's make sure we get a title sequence to match:"

Trillaphon: This music is giving me Vietnam flashbacks to Crime Zone.

Trillaphon: When you said "teenage spy movie" at first I was afraid we had to watch Shapeshifter again. Although even if it can't match that level of raw insanity, in some ways The Double 0 Kid is even more confusing. Like it's rated PG-13, for the sole reason that some of the actors get frustrated enough to say "shit" a couple of times. And then there's the latest Beverly Hills craze, hot tubbing in eveningwear.

Hydrogen: I might have felt a little bad making fun of the late Corey Haim, but since a main contributing factor to his death was rampant drug addiction developed partly in response to coping with/overcoming his child acting background, this movie pretty much killed him.

Trillaphon: He should appreciate us exorcising his demons by exposing it to the cold light of internet comedy, then.