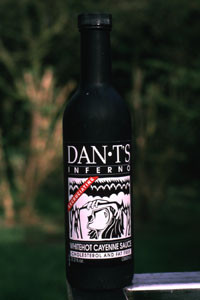 Excerpt from a notebook of Dante Alighieri, age 11, titled "THE DETENTIONIA (PRIVATE DO NOT READ!!)"

Circle Seven, Round One: The Violent Against Classmates

Around the edges of the deepened pit
There stretched a blackboard, scores of miles long
And many boys and girls stood chained to it

"You!" I called to the miserable soul
"Are you not Matt, who pushed me down in gym
And stuffed my head into the toilet bowl?"

"I am!" he called, in a voice thick with woe
"And with each moment that I suffer here
"My guiltiness for that crime does grow!"

And so we moved along, though now my heart
Delighted at the sight of such a thing,
The justice that the Lord there did impart.

(The notebook was eventually discovered by a teacher, and Dante was sent to a different school. The principal cited these "clearly deranged fantasies about classmates being condemned to hell" as a sign of "serious problems in this young boy's mind".)

Excerpt from My Birthday Party, by Harold Pinter (aged 8):

HAROLD'S MUM: Would you like a slice of cake, Harold?

HAROLD'S MUM: Well then, there you are. (serves cake)

HAROLD'S MUM: Dad? Do you want a piece of Harold's cake?

HAROLD'S GRANDDAD (standing at the window, smoking a cigarette): The secret is breathing. Take my tip. It's a well-known fact. Breathe in, breathe out, take a chance, let yourself go, what can you lose? Look at me. When I was an apprentice yet, Harold, every second Friday of the month my Uncle Barney used to take me to the seaside, regular as clockwork. Brighton, Canvey Island, Rottingdam -- Uncle Barney wasn't particular. After lunch on Shabbuss we'd go and sit in a couple of deck chairs -- you know, the ones with canopies -- we'd have a little paddle, we'd watch the tide coming in, going out, the sun coming down -- golden days, believe me, Harold. Uncle Barney. Of course, he was an impeccable dresser. One of the old school. He had a house just outside Basingstoke at the time. Respected by the whole community. Culture? Don't talk to me about culture. He was an all-round man, what do you mean? He was a cosmopolitan.

The As it Were Underfunded Child

(by Dave F. Wallace, age 10; originally given to his parents under the title Why I Should Get More Allowance):

OK, so bearing in mind the fact that I have spent a pretty-considerable amount of time in what I consider "good" behavior (although by "good" I'm assuming you already have a pretty good handle on most of the ethical philosophies of like all post-19th C. philosophers-- although Hume probably isn't so pertinent; I'll leave this up to you) (By the way, this is probably also a good time to mention that my sinistral phalangeal joint is a little askew due to an unfortunate playground-slide mishap (2)-- any dodgy penmanship or unavoidable typos sic), that is to say, not punching my sister or politely asking for more juice instead of just promoting it under stealthy cover of night-time pajama-raid, &c. &c. you may be wondering just what exactly it is I'm up to, like do I have an ulterior motive or whatever.

The truth of the matter is, I've been sort of subtly angling for a hopefully-permanent increase in the weekly allocation of remunerative solvency I've been getting as part of our tacit parent-child bond (which, by the way, I've been in something of a moral twist over [see below], seeing as how this sort of bald-faced overly explicit rearranging of the familial understandings can have exactly the reverse effect-- to say nothing of how risky it is that I might appear to be some glad-handing or greedy or rapacious or otherwise dissipated child, beyond hope or rehabilitation, eternally destined to fill the slavering maw of inadequate-nurture with substances or adrenalized thrill-seeking behavior or possibly even abuse of any of the more well-known amphetaminic compounds (3)&

(1) I'm going to just go ahead and call you "Dad", with all implicit understanding of your's and Mom's legally-agreed-upon marital status, although your unfortunate tendency to snore while sleeping in a way that recalls some of the more epiglottally resonant ungulates is but one reason why you aren't a patch on my biological or "real" dad, rest assured.

(3) E.g. crank, speed, crystal, tweak, glass, or any of the other varioepithetically named stimulant compounds currently wreaking havoc on the health and moral fiber of our nation's more socioeconomically disadvantaged youth, although my personal first-hand experience is sort of foggy and not-very-well sorted out, our 3rd-period Latin teacher's rather eloquent discourses on the restorative properties of MDMA(a) notwithstanding.
(a) 3,4-methylenedioxy-N-methamphetamine, the so-called "Love Drug" although its debilitating hangover effects make it hard to reconcile with any sort of selfless or rewarding love.