How to Train Your Dragon 2

EXPECTATIONS: While most of the world fell in love with How to Train Your Dragon and waited in agony for four years to get this sequel, I'll admit I had sort of forgotten about it. Chalk it up to me simply having other irrational obsessions in 2010, I guess. Since then, though, director Chris Sanders has jumped ship to produce Croods movies full-time, and co-director Dean DeBlois has taken over the series. That doesn't appear to be an issue though, because the trailers (even the ones littered with spoilers) have all been pretty stunning.

REALITY: It's next to impossible to discuss what makes How to Train Your Dragon 2 work as well as it does without getting into spoilers. If first act plot twists make you squeamish, I suggest skipping the next six paragraphs and jumping straight to the numbers. I also suggest burning your computer and never stepping outside to talk to anyone ever again. Having said that, How to Train Your Dragon 2 stands toe to toe with the original, occasionally even outdoing it. It's a film that takes immeasurably joy in the possibilities of visual storytelling, and though its story goes to some relatively dark places, it never betrays the simple fun of riding around on the backs of dragons.

And I even trained him to go buy more doritos while I stay at home and play Dota 2!


Taking place five years after the original, this film finds young viking Hiccup (Jay Baruchel) and his dragon Toothless exploring and mapping the islands surround their home island of Berk. Hiccup's father, Stoick the Vast (Gerard Butler) is grooming him to become Berk's new chief, which doesn't sit too well with the squirrely little, peg-legged turd. Hiccup instead flies off in search of other islands, where he quickly discovers a band of trappers hunting dragons for a madman named Drago Bludvist (Djimon Hounsou), who is the spitting image of the bassist from Slayer. With the help of a briefly mysterious dragonrider named Valka (Cate Blanchett), Hiccup and his dragon-riding pals (Jonah Hill, McLovin, all those kids) prepare for battle against Drago and his mountain-sized, ice-spewing Alpha dragon.

HTTYD2 has a refreshingly brisk, often relentless pace that forces the film to do away with needless backstory and exposition unless absolutely necessary. When the film opens, Hiccup tells us that dragons are cool now. He shows us some of the new moves he's been practicing with Toothless that will pay off later, but beyond that, the film is off and running in about five minutes. This is a movie that understands a sequel doesn't need to be frontloaded with exposition. Us dumb moviegoers will catch ourselves up by watching everything unfold. For example, Hiccup now has a lightsaber that doubles as a smoke bomb. When did he build that? How did he build that? Who cares, it's awesome! 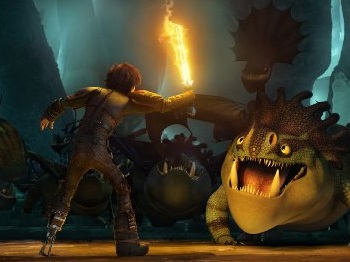 "Oh, your sword makes fire? So does my mouth."At the same time, the film peppers in little signs that point toward a larger story. When Astrid (America Ferrera) suggests taking over Hiccup's dragon when he becomes chief, Hiccup and Toothless share a brief, terrified glance. The two are now wholly dependent on one another. Hiccup can't fly without riding his dragon, and Toothless can fly at all without his rider's peg leg operating his saddle. The story quickly becomes one about separation anxiety, of a boy and his dog forced to live independent of one another. HTTYD2 also uses this notion as a springboard for Hiccup to learn some other lessons about growing up along the way.

Chief among these is learning that your parents aren't the insurmountable, larger than life figures you thought they were when you were little. They're regular people just like you. (Here come those spoilers I warned you about.) Valka quickly reveals that she is Hiccup's long lost mother, and it doesn't take Stoick very long to discover the two. What follows is a wonderful little scene where Stoick and his wife sing a love song together. It's a side of his father that Hiccup has never seen before, and it takes him a moment to process what he's watching. Suddenly, this stubborn mule of a viking that Hiccup has known his whole life is singing and dancing like a lovestruck kid half his age. If you've ever seen your parents together when they think no one is watching (not like that, geez), you know what a humbling moment this is. And for a kids' movie to take such broadly painted characters and give them a touch of real humanity, it's nothing short of brilliant. 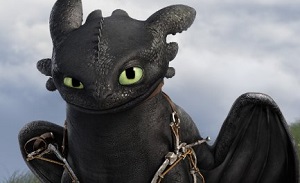 And this look apparently never goes out of style.I mention this scene not just because it's beautifully written, but rather because it's kind of the whole point of the film. Fostering a sense of teamwork and community is the backbone of these films, and when Hiccup's team is forced to split up in the final act, it makes for a truly thrilling finale. To that end, there isn't much for Hiccup's human buddies to do in this film, aside from flying around and waiting to be helpful. The guys compete for the affections of Ruffnut (Kristin Wiig), who has her own agenda doting on dragon hunter Eret (Game of Thrones' Kit Harington), who I guess also knows nothing about dragons.

How to Train Your Dragon 2 positions itself as the middle chapter of a trilogy, not unlike The Empire Strikes Back or The Chronicles of Riddick. It expands on the themes and setting of the original while doing all of the necessary footwork to keep us invested in the characters actually worth caring about until the next one rolls around. The only difference here is that when Hiccup brandishes his flaming lightsaber and proudly declares "YOU KEEP WHAT YOU KILL," you'd better believe he means business.

MINORITY REPORT: By the year 2052, the Dreamworks face replaced all the founding fathers on America's money. Since George Washington had wooden teeth, Toothless took his place on the one-dollar bill. True fact. - Donovan "Future Critic" Laird