EXPECTATIONS: We're in the middle of a new golden age of grim and grungy thrillers, with Blue Ruin, Winter's Bone, A Single Shot, Killer Joe and The East holding down the starting line. While it's a little unnerving to see Aaron Paul sporting a beard on the poster for Hellion, I'm excited for the film based on his presence alone, as he delivers the kind of intensity this genre demands.

REALITY: In a March 7 dispatch from SXSW, Entertainment Weekly critic Lindsey Bahr wrote "Hellion is heavy metal lyrical. & EW has an exclusive clip of Hellion's explosive opening." Whoever was responsible for marketing this film transmogrified that little snippet into Hellion's poster quote: "Explosive. Hellion is heavy metal lyrical." Meanwhile, IMDb lists it as a drama/thriller - thanks, I presume, to the same Hollywood hoodoo. 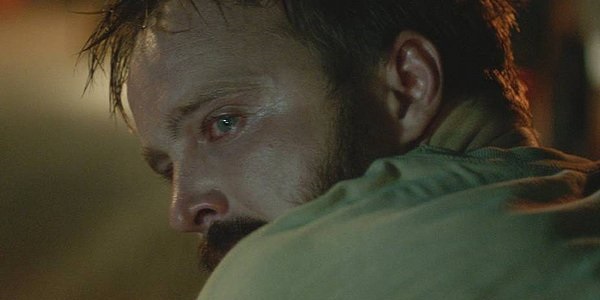 "I'll do anything you want. Just don't make me say 'bitch' again."The truth is, that's all kind of a marketing cheat: While an early scene qualifies as explosive, a late scene qualifies as intense and heavy metal occasionally occupies the sound space, Hellion is neither wholly explosive, heavy metal or thrilling. It is, however, kind of lyrical in the way it apes David Gordon Green's early films. It's also a lot of other things: a Kids-esque apocalyptic warning of the dangers of parental neglect, a movie that superficially explores the ways in which motocross and pyromania apparently appeals to East Texas kids left to their own devices, a drama about alcoholism and grief, an exploration of masculinity, and - most importantly - an opportunity for Paul to sprout the kind of beard that's supposed to scream "blue-collar alcoholic," the fierce twinkle in his blue eyes faded.

That's a lot of movies to pack into 99 minutes, which might be why Hellion hits the ground running, as the titular hellion Jacob Wilson (newcomer Josh Wiggins) hops on his motorcycle, meets up with his friends outside of a high school football game and joins them in utterly destroying a pickup truck. We're talking baseball bats, spray paint and fire, which begs the question: When you're setting a truck on fire, is it really necessary to attract extra attention by smashing all of the glass and stomping a crater into the hood? Nevermind. Jacob is the only one of his gang to get caught and, citing the code that ideologically aligns Mafiosos and 13-year-old Texans, declines to rat on his friends. He's ordered to attend some kind of diversion program and his father Hollis (Paul) confiscates his bike. 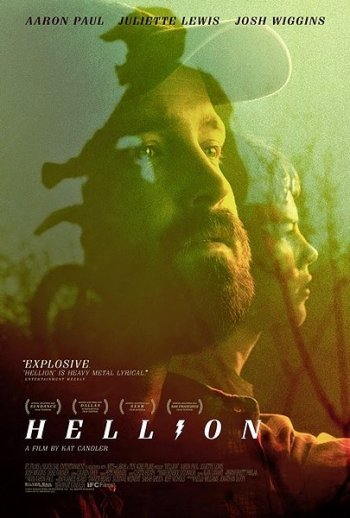 Explosive. Like watching motocross on TV.Out of anger towards Hollis or grief over his dead mother (probably a little bit of both), he decides to involve his little brother Wes (Deke Garner) in his next prank, as his friends break into a construction site and set a stack of pallets on fire. One thing leads to another, and Child Protective Services transfers custody of Wes to dear old Aunt Pam (Juliette Lewis), whereupon Jacob decides the only way to rectify this situation is to compete in a motocross race. What I wrote above barely carries us out of the first act. The second act is more sedate, even as Hollis tries to balance drinking against grief and court dates, a troubled kid in Jacob's "crew" grows even more troubled, the kids do some more destructive shit that isn't nearly as exciting & and on and on and on.

Again, plot doesn't always equal excitement or investment. Frankly, I spent most of the time disappointed that I wasn't watching the explosive thriller I'd been promised. Hellion isn't a bad film. On a technical level, writer/director Kat Candler can call this a win. It's beautifully shot (if you like Instagram-y hues and compositions), Paul gets a chance to stretch himself even further from Jesse Pinkman, the young actors (especially Wiggins) are as good as any young actors working today and the film has its moments, but a few strengths can't hide Hellion's three chief weaknesses: it's kind of a mess, the narrative treads lightly on well-worn ground and Candler works so hard to attain solemnity, Hellion is a suffocating exercise in depressive filmmaking, with only a hint of redemption waiting at the end - which, along with Paul's sad-drunk beard, would mark this narrative as classically realist if it weren't for the motocross races, pyromania and heavy metal.

Some of the details are right - I especially liked the scene in which Jacob makes a peanut butter sandwich for his brother and a whipped-cream-and-sprinkles sandwich for himself - but the uneven tone is really kind of alienating. Here's a pointless exercise: try to find consistent and novel meaning in Hellion. Yes, teens sometimes manifest grief as rage, boys take their cues from their friends and fathers, and widowers sometimes turn to the bottle in despair, but why does Metallica pop up on the soundtrack every 20 minutes or so? Why would Jacob winning a motocross race ensure that Wes will return to the family? How exactly does Jacob proceed from hellion to white knight? What's the significance of Hollis tossing symbols of his troubles (Jacob's bike and a foreclosure sign) into the bed of his truck before driving off in silent agony (presumably to drink)? And why does a surprisingly gut-wrenching climax feel like it came from a different screenplay? On paper, Hellion earns this ending - two of the more prominent narrative strands point to the development - but it's also another dissonant scene in a film that's boiling over with incongruent pieces.

MINORITY REPORT: This sounds like a movie that really wishes it could be a companion to The Place Beyond the Pines. Motocross? Metallica? Dirtbikes and their ability to save (or not save) families? Great, I think I just psyched myself up into watching this. Thanks a lot. - Joseph "Jay Dub" Wade