EXPECTATIONS: There is no such thing as an objective writer. As human beings we all have our biases, and it is the responsibility of good critics to be completely transparent about these viewpoints so that they can do their jobs in spite of them. That's part of the reason we have this opening "Expectations" paragraph, so we can be up-front about it. Regular Current Releases readers know that I worked in an elementary school before Internet Celebrityhood took me away. So every ad I see for this film gets me angrier and angrier. It's also funded by a man who believes parents should be allowed to take over schools and force creationism to be taught. Besides all of these crimes, this movie's existence also gives more work to the guy who made Beastly, so I am all set to lay down the righteous wrath. 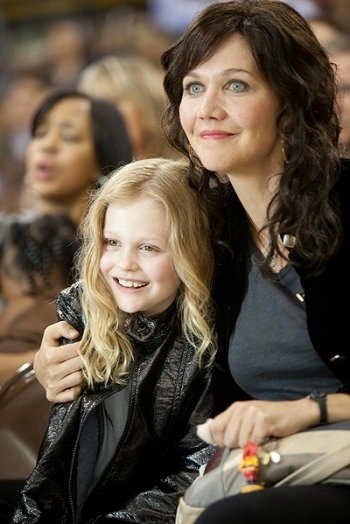 Well, that's just creepy.REALITY: At least once a year we get a film about a Pretty White Woman risking everything on a social justice campaign. She's always completely unqualified, and gets her message across through pure spunkiness and flirtatiousness. Bonus points if she manages to drag her friends and family through her lesson in obnoxiousness. These are the worst characters imaginable, because they're asking us to root for people we would cross the street to avoid if we saw them handing out flyers.

This time the Pretty White Woman is Jamie Fitzpatrick (Maggie Gyllenhaal, who really should know better), a single mom who works as a bartender, because that's the only job single moms can have in movies. After her daughter has a Greedy Pension-Grabbing Bad Teacher experience, Jamie goes around irritating people until Helpful Exposition Character tells her of a law that allows parents and teachers to take over schools in a way that's never really explained. She recruits third grade teacher Nona Alberts (Viola Davis) through sheer determination, and music teacher Michael Perry through sheer sleeping-with-him-ation, and together they take on a problem that thousands of people smarter than they are have failed to fix, while not one, but two, Tom Petty songs are disgraced by being associated with this. (If Tom Petty is secretly anti-union, don't tell me, I don't want to know.)

This is a film review,, not a political soapbox, so let me try to detail what's wrong with this movie from a strictly cinematic point of view. Jamie is a horrible, unlikable main character whose only defining trait besides irritating optimism is that annoying thing Gyllenhaal does in all her movies where she smiles while she's crying. On that same note, I really want someone to explain to Viola Davis that even the strongest Black Sidekick role is still a Black Sidekick. Oh, and in this case, since she's the one decent teacher in a film that hates teachers, she's literally One Of The Good Ones. Numerous attempts are made to give Nona some backstory and development, but they're ridiculous, far-fetched, and forgotten as soon as they are brought up. And the children, the ones we're constantly reminded this is all for? They pretty much disappear from the film the instant Jamie goes off on her crusade. 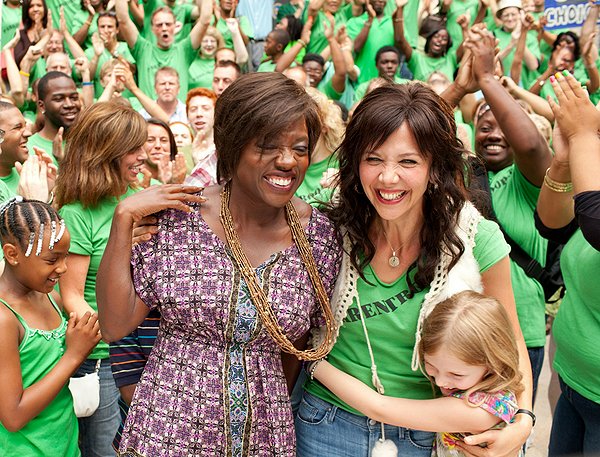 ...and all the world's parents joined hands and rejoiced!

You know what? If the movie isn't going to bother to keep its raw hatred subtle, neither am I. Everything in this film contradicts its own message. If you're going to tell us that the Teacher's Union is evil and corrupt, don't have the Union President quote Clarence Darrow in his bad-guy speech. You may think you're adding depth, but when you've already been blatantly partisan, it's just pointless. My favorite part is how this film shows the teachers all bonding together over drinks at Jamie's bar, and even throws a dance sequence in there (of course there's a dance scene.) Meanwhile, the characters complain that unions keep them from spending enough time with their students.

Hey, you know what teachers can't do if you take away their time-protective unions? Go and have a drink with their friends. I already know teachers who will drive several towns away to go on a date, lest a parent should see them outside drinking spirits and engaging in revelries like a harlot. Most good teachers already volunteer their time willingly, they shouldn't have to worry about whether Timmy is going to call them up with history questions on 11:30 at night on a Saturday.

I'm not denying that the public school system is broken, it is. But it's completely irresponsible to make a film like this that oversimplifies the problem when it's not flat-out lying. It presents a fantasy world in which, if the teachers try hard enough, all the parents will magically get along and agree on everything and the kids will all decide that homework is more fun than video games. You hear that, teachers? You're just not trying hard enough. It's not your fault though, it's those snobby snobs at the unions (played here by Holly Hunter) who say things like "In my educated opinion!" because they think they're so smart with their educations. We certainly wouldn't want that to be a good thing in our movie about education policy! (Hunter also dismissively says her niece wants to be a professional princess when she grows up, which is something we at Something Awful know is totally possible.) 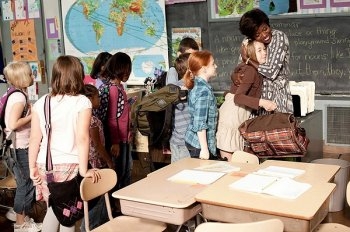 Completely inappropriate.Parents, I know you love your kids. I know you do. But so does every other parent at your kids' school. And quite frankly, at least some of you are raising little assholes. Maybe you don't think you are, but I know you think someone else is. And you want to decide what your kids learn, but you don't want them to decide. There's a reason why we have (terrible) national and state standards and parents don't decide everything. Because in Won't Back Down, all the teachers and parents magically agree on everything and build the school together. What about sex ed? What about evolution? (Which, I'll add, the founders of this film believe shouldn't be taught.)

Look, a lot of teachers are dissatisfied with the state of education today, that's why they're on strike in Chicago. And they all agree that No Child Left Behind screwed a lot of things up. For example, they let me work with schoolchildren. But here's the thing. I couldn't cut it being a teacher. That's why I do this. The risks greatly outnumber the rewards for people entering education, and films like this just make that problem worse.

Yes, there are a lot of bad teachers out there. There are also a lot of bad film critics. And bad cops. And grocery clerks. And shitty cameramen. But there are also bad filmmakers. Filmmakers who will spread dangerous misinformation and use the easily manipulated film audience to ultimately hurt that which they are trying to save. Filmmakers who will end a movie by having a dyslexic kid stumble over a word and then figure it out, look straight into the camera, and say "HOPE." (This actually happens.) You are those filmmakers, Walden Media, and your movie is trash. If someone wrote a petition against you, I'd sign it.

MINORITY REPORT: The best way to get anything done is to be as belligerent and tenacious as possible. This is how I repeatedly get to ride for free on public transport. Often I will meet a young lady on the bus and find the exact same tactic works in convincing her to let me follow her home. I don't know where she disappeared to the next morning, officer. - Montague "Legally Sane" Smythe